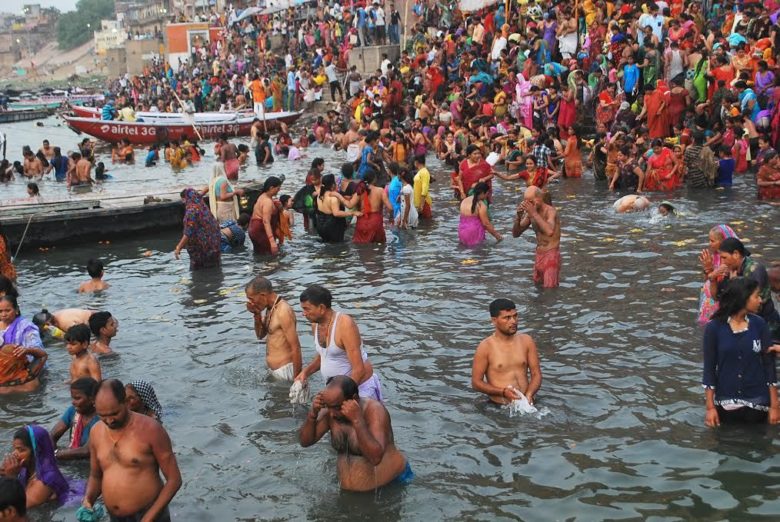 When lakhs of the devout took a dip in the Yamuna at ghats in Vrindavan, Mathura and Agra on Ganga Dussehra on Tuesday, they had a “face to face interaction” (sakshaat darshan) of the Kali Nag (evil serpent) in the form of pollution that has reduced the river to a sewage canal.

Ganga Dussehra, symbolising the peaking of summer “and the birth of the holy Ganges as it descended from heavens this day” was celebrated in the Braj Mandal with gusto. The devout distributed lassi, sharbat, shikanji and milk rose at scores of places. The ghats had groups of people performing puja of the Yamuna, applying chandan and showering rose petals.

Mathura’s Vishram Ghat saw an unending queue of early morning bathers. But people in Agra were sorely disappointed as there are no traces of the ghats.

“It took a lot of courage on the part of the faithful to wade through dirt and squalor to reach a trickle midstream from Hathi Ghat. At the Balkeshwar Ghat, the crowd was bigger,” said Nandan Shrotriya a priest of the Shri Mathuradheesh temple.

On Ganga Dussehra it is customary for people to take a holy dip in the rivers and eat water melons, mangoes or litchis after Shiva’s puja. “Ganga Dussehra is also an indicator of the change of weather. Bhagirath is believed to have brought Ganga to earth on this day,” said Pandit Jugal Kishor.

As the day advanced, hundreds of kites were seen in the sky. “Kite-flying is a major event on Ganga Dussehra. Since it is considered an auspicious day, a lot of new shops and houses are opened on this day,” said Bankey Lal Maheshwari, a shopkeeper of Johri Bazar.

However because of the high pollution level people have not been able to enjoy taking a bath in the river. “A dip is out of question. It’s an invitation to infections,” said River Connect Campaign activist Ranjan Sharma, adding that the district authorities should have ensured additional release of water from barrages upstream of Agra.

“For pilgrims and the devout, the Yamuna’s water is such a put-off, what with its stink and foul smell filling the nostrils that those who do dare to take a dip return with a fear and guilt,” said Jagannath Poddar of Vrindavan.

Normally the government agencies release 1,000 cusecs of extra water for the Dussehra but this year this has not been done and the saints of the Braj area resent this, he added.

A fortnight ago activists of the River Connect Campaign had protested through a “sand bath” in Agra to demand the release of additional water in Yamuna for the festival but the authorities failed to respond.

“Without a minimum flow, particularly during the lean months, it is not possible to revive the river or to restore its past glory. Encroachments in the form of concrete structures on both sides are another major problem,” said river activist Jagannath Poddar.

“With better road connectivity, the number of pilgrim-tourists has increased many fold. On weekends lakhs turn up for a darshan of Bankey Bihari in Vrindavan and a parikrama of the holy Goverdhan hill. When these people go to the Yamuna, the reaction is sharp and negative. One hears only curses and abuses,” he added.

In Mathura, the polluted effluents from hundreds of sari-dyeing units into the river, has only compounded the problem, caused largely by the discharge of sewage and other pollutants as the river flows through the national capital.

Reduced to a pale, sickly nullah drain, the glory and grandeur of Yamuna that attracted the Mughals to build some of the finest monuments like the Taj and Etmauddaula along its banks will never return, lament the residents of Agra’s Yamuna Kinara road.

Those who take the road are often seen covering their noses to keep away the foul odour of the stinking mess.

But with Narendra Modi becoming the prime minister and Uma Bharti leading the Ganga cleaning campaign, hopes have once again been revived of some action at the government level to restore the Yamuna’s glory in the Braj area.