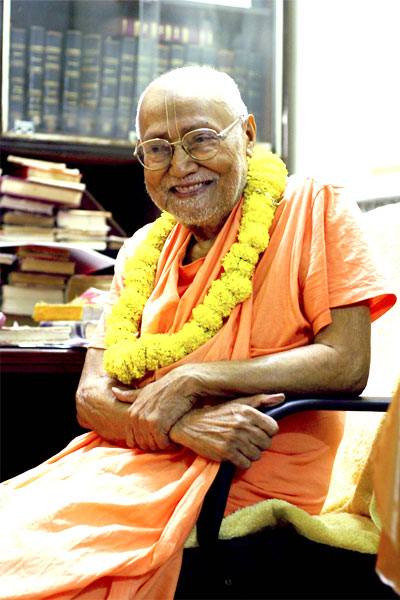 The Supreme Lord is residing in the hearts of every living being and He has actual love for all. All are from Krishna, by Krishna and in Krishna. Eternal causeless devotion naturally exists in every soul. Due to the aversion of conditioned souls to Sri Krishna, they are enveloped by the dirt of worldly desires. The illustration can be given of magnet and iron. It is the nature of a magnet to attract iron and the nature of iron is to be attracted by a magnet. But if magnet and iron are near and there is no attraction, it is due to the dirt or rust on the iron. Suddha bhakti is not to be borrowed from somebody, it is inherent in every jiva. It is to be manifested by the company of a bona fide suddha bhakta. Association of a suddha bhakta, therefore, is essential. From a distant place also we can have association of sadhus by sincerely following their heart. Remaining outwardly in contact with a sadhu is not the association of a sadhu. As for example, bugs remain in the beds of the sadhus and lice in the heads of the sadhus. They are not associating with the sadhus, they are exploiting the sadhus.