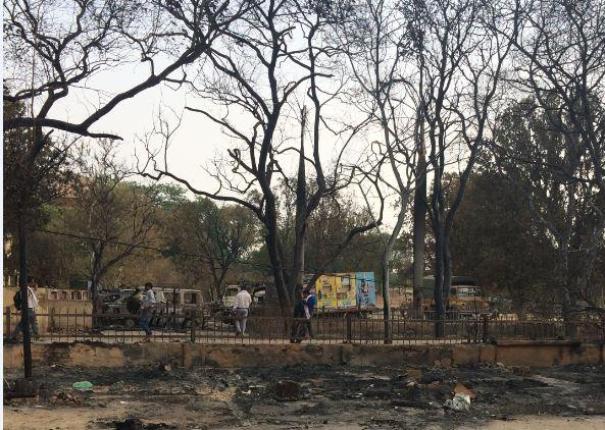 For about 27 months, the Swadheen Bharat Subhash Sena (SBSS) had been squatting in Mathura’s Jawahar Bagh till they were cleared out during violent clashes on Thursday. Officials in the horticulture department, which has its office inside the park, told TOI that over the last two years the cult had destroyed thousands of trees to make way for their jhuggis while hundreds of trees also burned down during Thursday’s violence. Officials said the restoration of Jawahar Bagh, which now bears a charred look, would take several years.

“These people had been squatting here for over two years. They were running a kind of parallel government in Jawahar Bagh and they had little regard for the trees. Over the last two years, they destroyed thousands of trees in Jawahar Bagh. During Thursday’s incident alone, hundreds of trees burned down. We are yet to get a final figure but according to my estimate, well over 8,000 trees in Jawahar Bagh have been destroyed,” an official in the district horticulture department said.

He added, “In the wake of the tragedy, the focus is rightly on the loss of human life. Soon, however, we must address the fact that the ecosystem in Jawahar Bagh has also been wrecked. It will take us several years to restore Jawahar Bagh to what it was before the squatters came.”

A horticulture department board lists the trees that grow in the area, which includes guava, mango, orange, lemon and pomegranate trees. These trees are spread over 280 acres of land in Jawahar Bagh, which had been occupied by Ram Vriksha Yadav and his followers.

RS Sharma, horticulture inspector, said, “We are currently cleaning up the park. Charred trees, utensils and cylinders were strewn all over the park. After we clean it out, we will begin assessing the damage that was done to trees in Jawahar Bagh. The damage that the squatters caused was significant. It will take a while before we can restore it to its former glory but we will work hard towards that goal.”