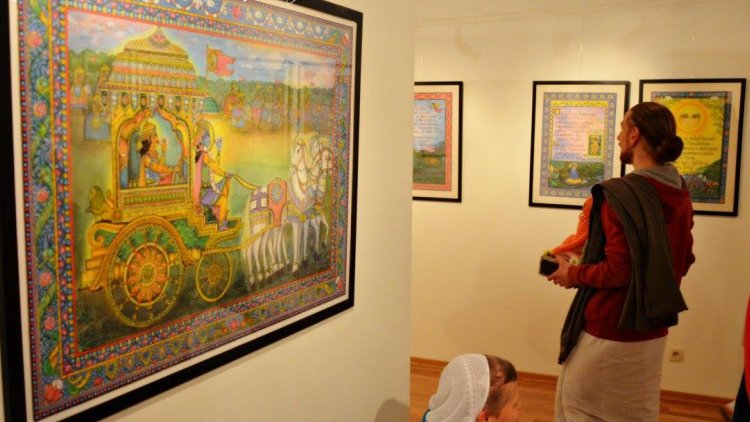 A brand new exhibit of artwork from Kim Waters and Chris Murray’s classic 1980 book, Illuminations from the Bhagavad-gita, opened at the Museum of Sacred Art (MOSA) in Radhadesh, Belgium on May 28th.

The exhibit features all Kim’s original illustrations from the book, which is illuminated with translated verses from Srila Prabhupada’s Bhagavad-gita As It Is. The uniquely charming, colorful images depict Krishna and Arjuna, Radha Krishna, Krishna Balarama, Vishnu, Pancha-Tattva, Nrsimhadeva, Sita Rama, and more.

Amongst the attendees at the opening were the Mayor of nearby Durbuy, Philippe Bontemps; the representative of the Indian Ambassador to Belgium, Ankan Banerjee; and many Radhadesh congregation members and supporters.

Proceedings began at 10:00am with local priest Dhira Krsna Das chanting mantras to inaugurate a new Bhagavad-gita Walk through the forest around ISKCON Radhadesh. The walk features thirty-two large panels of art from Illuminations from the Bhagavad-gita, with Sanskrit verses and translations in French, Dutch and German.

“It’s 2.8 kilometers long, and takes about forty-five minutes to walk,” says MOSA Director Mahaprabhu Das. “It’s a great way for people to meditate and reflect on the Gita.”

After sampling a section of the walk, guests and devotees attended the inauguration of the Illuminations exhibit at the museum.

Artist Kim Waters had travelled all the way from Washington D.C. for the opening, and did artwork demonstrations for everyone, showing them her mediums and techniques.

She then signed and sold fifty to sixty copies of a new expanded MOSA edition of Illuminations from the Bhagavad-gita, which includes extra drawings, and an account by Satyaraja Das on how the work came to be.

The new edition also includes photos of Srila Prabhupada viewing the illustrations and encouraging the artists on two separate occasions in New Vrindaban, West Virginia, and Potomac, Maryland. “You are introducing a new art form to this country,” Prabhupada reportedly told them. “You will get great rewards for this.”

The signing was followed by a cultural presentation that was shared with the European Yoga Congress, which was also happening in Radhadesh at the time.

Kim Waters was thrilled with the public’s positive reaction to her artwork, and in particular that of Chaurasia, who appreciated her work very much.

The Illuminations exhibit will run all the way until November. It will be accompanied through that time by the Bhagavad-gita Walk, which will include a quiz with prizes ranging from postcards and maha-prasadam to copies of Kim Waters’ books, depending on how many questions are answered correctly.

“The exhibit is also part of an ISKCON artists theme at MOSA this year, because it’s the 50th anniversary of ISKCON,” says Mahaprabhu. “At the beginning of the year, we had beautiful portraits of Srila Prabhupada by Mayapur-based artist Anuradha Dasi. Now of course, we have Kim Waters with Illuminations from the Bhagavad-gita. And in November we will have Satsvarupa Maharaja with his Outsider Art, which will also feature Krishna and Srila Pabhupada.”

In the meantime, Mahaprabhu says, Illuminations is a very special exhibit because Srila Prabhupada personally interacted with Kim Waters and Chris Murray and encouraged them to do it.

“It is part of ISKCON’s history,” he says. “Many devotee children grew up looking at the book. And surely, it will inspire future generations of devotee artists to also do their own illuminations on Srila Prabhupada’s Bhagavad-gita As It Is.”