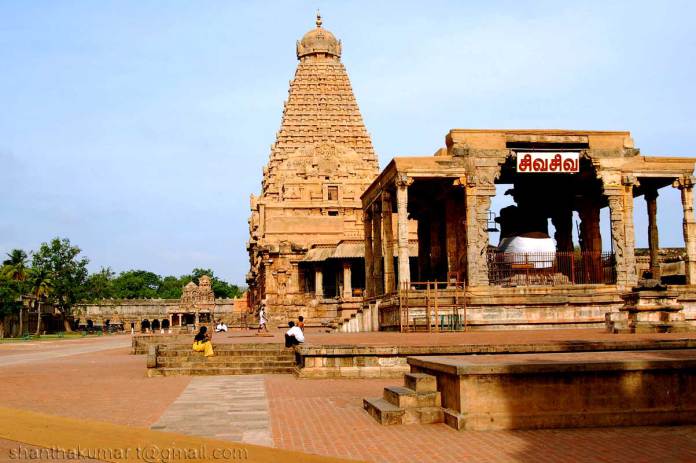 The wonders of ancient Indian architecture is awe inspiring.

Temples built aligned to solstices,shadows falling on the Idols here there is no source for light to peep in,idols changing colors,holes drilled, in the ears of the idol’s ears, coming out through the other ear,temples built at slanted angles……..

I have written on these and on the Thanjavur Big Temple built in 1010 AD with Granite where there was/is no mountain nearby.

I have written on the logistics involved in building it.

I have written on the Micro Drilling Technology in Mahabalipuram,Tamil Nadu.

If a Pallava King, Narasimhavarma could do it why not Rajaraja Chola, who built the Thanjavur Big Temple?

I found that Micro Drilling Technology was used in the construction of Thanjavur Big Temple to carve out a hole less than 3 mm!

“This is the Thanjavur Brahadeeswarar temple in India which was built between 1004 and 1009 A.D. So it was built over a 1000 years ago. Found some amazing drilling technology with precision holes less than 3 millimeters wide. These holes are so small that nobody has noticed them and has been a secret for 1000 years.

These rocks look like mere decoration, but if you look closely, there are very small holes cut into them. I will put a small twig to show you how small the hole is. I tried to put my pen through the hole and it would not go through.

Another fascinating thing about these holes is that it is not even straight drilling, but is done at an angle. I put the twig on top and it comes out almost at a right angle.

The temple walls are completely made of granite, one of the hardest materials on earth. In modern days, we use diamond tipped tools to make these kind of holes. How did the people carve such minute holes on these granite rocks a thousand years ago?

This technology is older than other ancient cultures like Mayas and Incas. The hole is also much smaller than any other ancient drills I have seen. It is also interesting to think about What were these holes used for? Whatever went inside must have been very thin and flexible because of the size and angle. Why would they need such minute holes anyway?