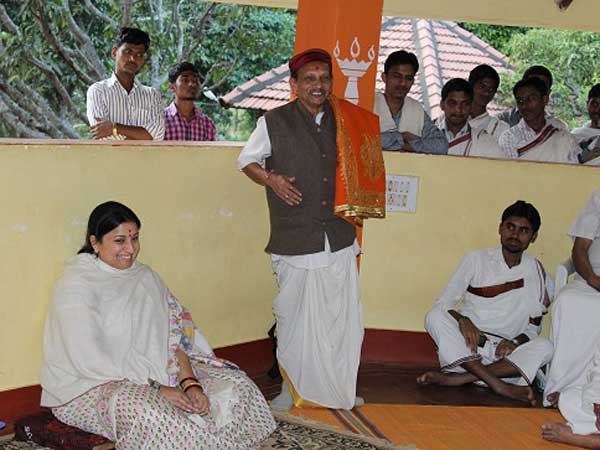 It must be noted that in India there are 3 Gurukula model schools, Maitreyee Gurukula in Puttur Taluk of Dakshina Kannada district, another in Sringeri (Prabhodini Gurukula) and third one (Veda Vignana) at Magadi road in Bengaluru. All these schools in Karnataka are strongly backed by Sangh Parivar.

According to sources in Gurukula, Smriti Irani in the month of January visited Gurukula- Veda Vignana in Bengaluru to hold a first round of discussion with a top office bearer of Gurukula Dr Ramachandra G Bhat. It was a visit, albeit a scheduled one, designed to appear as impromptu.

During the meet with Dr Ramachandra G Bhat, HRD Minister deliberated on establishing more number of Gurukulas across the nation to strengthen Sanskrit language and through Gurukula education build a bridge between ancient India-modern India. Irani in her brief talk after a discussion in Gurukula said “as I am given responsibility by the organisation (RSS), I wish to lend support to Gurukula concept.”

Gurukula teachers greeting Irani through Indian tradition Irani said modern education has been driven by selfish motives. Hence modern schools with ancient roots could be seen as a breather to revive education system in the country. Gurukula will keep ancient Indian customs and traditions intact. In her talk she emphasised on establishing more number of Gurukulas pan India.

Ahead of her brief talk in the Veda Vignana, a presentation on Gurukula concept was carried out to enlighten Irani on the system. Impressed by the presentation; in her talk, Irani said “in the coming presentations, we must talk about 100 fold more number of Gurukulas.” Smriti wished for establishment of 300 such schools.” Irani assured all kind of support to set up Gurukulas. Irani, in her last leg of talk prayed to Lord Shiva to realise intentions of her visit to Veda Vignana.

A fresh development will come as a big booster to Sanskrit language, which is being spoken by minute percentage. However, students studied in Gurukula even today converse in Sanskrit with their fellow mates. Students are nurtured in such a way in these schools, they tend to preserve the knowledge of Sanskrit language all through their lives.

Establishing 300 Gurukulas in the country could be seen as a massive success in terms of increasing number of people speaking in Sanskrit. Since Gurukula is well abide by bygone Indian traditions and customs, hope for bring back forgotten tradition has also flowered.