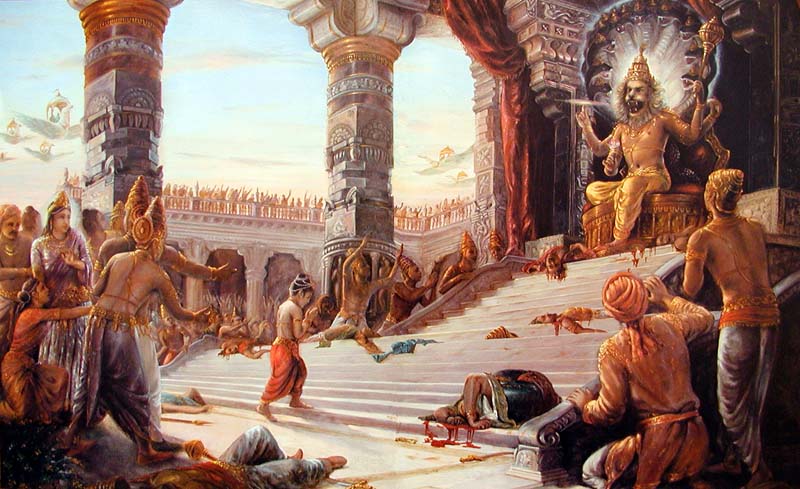 Bhaktivinoda Thakura initiated Bhaktisiddhanta Saraswati Thakura with a Nrsingha mantra, and Bhaktisiddhanta in turn gave this mantra to some of his disciples. However, Nrsinghadeva is not a raga-marga deity. As Caitanya Vaishnavas, we do not worship him as our ista-devata (primary form of godhead) or aspire to attain Vaikuntha loka.

At the same time, Nrsinghadeva plays a prominent role in Gaura lila, especially in relation to nama-sankirtana. He is bhakti vighna vinasana—he who removes obstacles on the path of bhakti. So Nrsinghadeva is important to those whose path is blocked by anarthas. While we do not worship him with a view to attain Vaikuntha, we can worship Nrsinghadeva as a manifestation of Krishna who is particularly helpful in removing anarthas.

It is worth noting that Prahlada’s ista-devata is Krishna, (as is Narada’s—his guru) who appeared before him in a form appropriate to the circumstances—Sri Nrsingha. When asked by his father about what he had learned in school, Prahlada said, matir na krsne paratah svato va, “Inclination toward Krishna is never aroused in persons too addicted to sense gratification and materialistic life.” Sukadeva Goswami told Raja Pariksit that Prahlada had rati for the son of Vasudeva (Krishna): vasudeve bhagavati yasya naisargiki ratih; and further, krsna-graha-grhitatma, “He was fully absorbed in thought of Krishna, who affected his consciousness like an astrological influence”; and yet again, govinda-parirambhitah, “He was embraced by Govinda (and thus oblivious to the normal functions of life).” It is also mentioned in Srimad-Bhagavatam that Pariksit Maharaja would “be patient like Bali Maharaja and a staunch devotee of Krishna, like Prahlada,” dhrtya bali-samah krsne prahrada iva sad-grahah (1.12.25). Finally, the Prahlada-Nrsingha lila is described as a narration about Krishna: esa brahmanya-devasya krsnasya ca mahatmanah. Because it is also obviously about the devotion of Prahlada, it follows that Prahlada’s devotion is for Krishna.

Krishna protected Prahlada by manifesting his cakra in the form of Nrsinghadeva. However, his devotion to Krishna does not mean that he is a Vraja bhakta. Only those who worship Krishna in the raga-marga following the bhava of the residents of Vrindavana attain the ideal of Vraja bhakti, whereas Prahlada worships Krishna according to the injunctions of vaidhi-bhakti.

Sri Nrsinghadeva’s lila with Prahlada teaches us about pure devotion, as Prahlada had no materially selfish desire. We must come to this platform to enter into any sphere of the spiritual world. Those with selfish desire would do well to study this lila carefully, whereas those who are advanced along the raga-marga may forgo formal worship of Nrsinghadeva, or engage in it to set an example for those at other stages of development.

Eligibility for raganuga-bhakti is not cheap. When one has greed for a particular bhava of Vraja and is no longer in need of human reasoning or scriptural prohibitions in order to be motivated in spiritual practice, he is eligible for raganuga-sadhana. Conservatively speaking, greed for a particular bhava implies absence of greed for anything else. Still, raganug-sadhana can be either jata rati or ajata rati. Thus those who have not attained bhava-bhakti (ajata rati bhaktas) can also practice raganug-sadhana, but their raganuga-bhakti is not yet pure. Ajati rati raganuga-sadhana is mixed with vaidhi-bhakti.

According to Bhaktivinoda Thakura, this practice, which may very well involve the worship of Nrsinghadeva at some point, begets the jewel of raganuga-bhakti. Thakura Bhaktivinoda worshiped Narasinghadeva thus,

Within my sinful heart the six enemies headed by lust perpetually reside, as well as duplicity, the desire for fame, plus sheer cunning. At the lotus feet of Sri Nrsingha, I hope that he will mercifully purify my heart and give me the desire to serve Krishna.

Weeping, I will beg at the lotus feet of Nrsinghadeva for the benediction of worshipping Radha and Krishna in Navadvipa, perfectly safe and free from all difficulties. When will this Lord Hari, Whose terrible form strikes fear into fear itself, ever become pleased and show me his mercy?

Even though Sri Nrsingha is terrifying toward the sinful souls, he offers great auspiciousness unto the devotees of Krishna, headed by Prahlada Maharaja. When will he be pleased to speak words of compassion unto me, a worthless fool, and thereby make me fearless?

He will say, “Dear child! Sit down freely and live happily here in Sri Gauranga-dhama. May you nicely worship the divine couple, and may you develop loving attachment for their holy names. By the mercy of my devotees, all obstacles are cast far away. With a purified heart, just perform the worship of Radha and Krishna, for such worship overflows with sweet nectar.”

Saying this, will that Lord delightedly place his own divine lotus feet upon my head? I will experience sublime love for the divine couple, Radha-Krishna and undergo the ecstatic transformations called sattvika. Falling on the ground, I will roll about at the door of Sri Nrsingha’s temple.

Furthermore, in his song “Krsna Nama Dhare Kata Bala,” Bhaktivinoda Thakura sings, vidhi-marga-rata-jane svadhinata-ratna-dane raga-marge karan pravesa, “That person who is fixed in following vaidhi-bhakti attains the jewel of independence, by which he is placed on the path of raganuga-bhakti.” Here the Thakura is not saying that vaidhi-marga begets Vraja bhava, but that vaidhi-bhakti performed with a view to attain eligibility to tread the raga-marga grants one that eligibility or independence from scriptural proscriptions in terms of their being a necessary motivational factor for sadhana.

Furthermore, in the same song Bhaktivinoda Thakura clearly explains that acquaintance with one’s internal spiritual form (svarupa) required for the culture of raganuga-bhakti proper is revealed by the grace of Krishna nama, isat vikaai punah dekhaya nija rapa guna citta hari laya krsna pasa purna vikasita hana vraje more jaya lana dekhaya nija svarupa vilasa, “When the name is even slightly revealed it shows me my own spiritual form and characteristics. It steals my mind and takes it to Krishna’s side. When the name is fully revealed, it takes me directly to Vraja, where it shows me my personal role in the eternal pastimes.” Aspiring for Krishna nama to grace us in this way, we petition Sri Nrsinghadeva to relieve us of so many internal impediments to our ultimate goal.