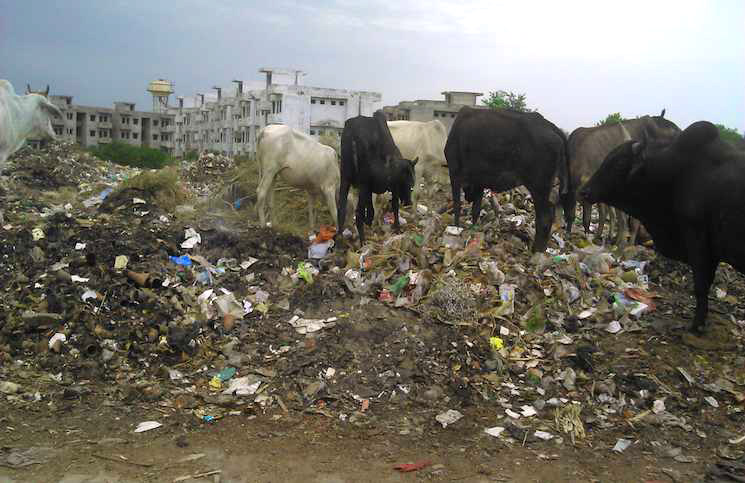 Vrindavan city administration hasn’t taken any action on the garbage dumping along the Yamuna river banks. The situation remains as it is even after the fine imposed by the National Green Tribunal (NGT) on the DM and other Government bodies on May 11th.

Pile of garbage and can still be seen at many places in the city. The garbage collection centers were also not cleaned up even after the instructions from NGT neither there is any facility available to collect and dispose the garbage at the dumping ground on city outskirts. Huge piles of garbage can be seen at Kishorpura, Mirzapur dharamshala, Jugal ghaat, Ratan Chatari apart from other places.

Petitioner at NGT, Madhumangal Shukla told that NGT is serious in saving the environment of the holy city, but unfortunately local authorities are not coordinating neither following the orders from it.

Last year Cabinet Minister Uma Bharti said that no sewage water will flow into Yamuna, but the Government hasn’t shown any results yet. Polluted water from more than 40 sewage plants flows directly into the Yamuna in Delhi which are causing adverse effect on the efforts taken by Yamuna activists.

Reports mention that Yamuna is getting maximum pollution from Delhi and Haryana as a result, Mathura-Vrindavan is only getting sewage water instead of true Yamuna water. Even in Vrindavan, around 24 drains are flowing directly in Yamuna against which the Government has taken few steps recently. Though the help from the center Government is still pending in order to protect Yamuna from pollution in Delhi and Haryana.