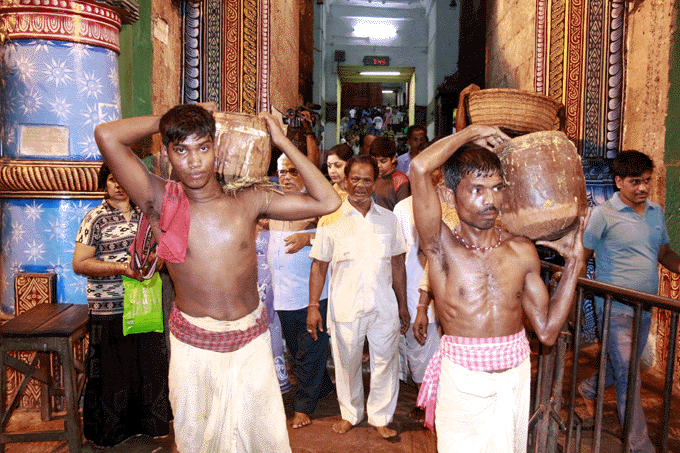 If the Shree Jagannath Temple Administration (SJTA) in Puri has its way, devotees will soon be offered Mahaprasad for free. From Monday, the shrine body started distributing small quantities of the holy food to devotees.

“Coinciding with Akshaya Tritiya, we started the noble process. Initially we will distribute a handful of sweet rice to the devotees. Soon, we will make seating arrangements for devotees and offer them Mahaprasad sufficiently,” SJTA’s Chief Administrator Suresh Mohapatra said.

Mohapatra said the expenditure will be jointly shared by SJTA and Suar Mahasuar Nijog of the temple. The Suar Mahasuar Nijog, a body of the shrine cooks, has the sole right of preparing Mahaprasad in the 12th Century shrine. Every day, at least 20 types of Mahaprasad and dry bhog for nearly 30,000 people are cooked in the shrine kitchen, touted as the biggest temple kitchen in the country.

“Many temples in the country offer free Prasad to devotees. We decided to introduce it for the welfare of poor devotees, who cannot afford to purchase the Mahaprasad,” Mohapatra said.

The idea to offer free Mahaprasad reportedly came from a section of servitors, who recently visited several shrines in the country to learn welfare measures for devotees. “We will soon appeal to the generous devotees and companies to provide us donations to feed free Mahaprasad to poor devotees,” Mohapatra said.

Temple sources said the timing of the daily distribution of a small quality of Mahaprasad will be announced at the Singha Dwar much in advance. Temple officials are also exploring the feasibility of distributing Mahaprasad twice in a day. For the time being, the Mahaprasad will be offered in the evening at the Lion’s Gate.