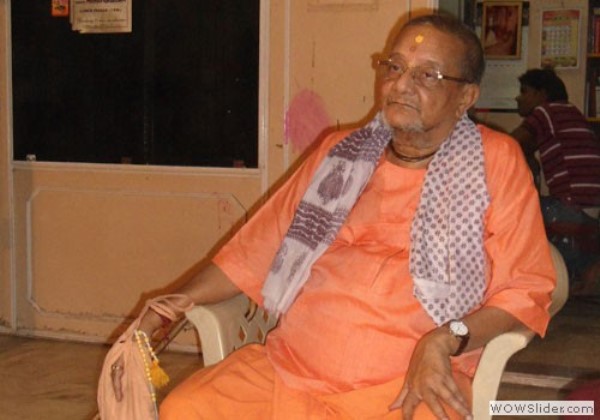 Sri Nirmal Chandra Goswami was born on April 1, 1945 at home, at the Radha Damodar temple premises, to Sri Gaurachand Goswami and his wife Srimati. One of two sons, he received all his education and training directly from his father at the Radha Damodar complex. In 1978, on the passing away of his father, he assumed all responsibilities for the service of Sri Radha Damodar.

Sri Nirmal Chandra Goswami was very attached to mangal arati, the pre-dawn worship of Sri Radha Damodar, and his sons mention that even as his health waned he would try to have darshan of his beloved Lordships at mangal arati.

The Sri Sri Radha Damodar temple is unique in the world of Gaudiya Vaishnavism in several ways. In addition to the deities, and Govardhan sila, that are worshipped here, there are also the samadhis of Sri Rupa Goswami, Sri Jiva Goswami and other prominent acharyas.

Furthermore, to the modern Gaudiya Vaishnav movement is the connection between this temple and Srila A.C. Bhaktivedanta Swami Prabhupada, the founder of ISKCON. To this day Srila Prabhupada’s room and kitchen are still maintained and preserved adjacent to the temple room.

Acharya Gaurachand Goswami had invited Srila Prabhupada to stay at the Radha Damodar temple, where he lived for several years while he translated the initial volumes of the Srimad Bhagavatam, and as he prayed and meditated on taking his teachings to the west.

Sri Nirmal Chandra Goswami had some sweet dealings with Srila Prabhupada and according to his sons would often accompany him to take their morning bath in the Yamuna. One winter morning when the water was very cold and Nirmal Chandra was reluctant to take a bath in the river, Srila Prabhupada showed him how the water on the banks of the river, at the edges, were cold but that it warmed up as one went further into the water.

On another occasion, Sri Nirmal Chandra went to visit Srila Prabhupada in delhi. He had planned to be there only for the day, but he ended up staying with Srila Prabhupada for upto three days there. Since he had not planned on staying more than a day, he had not taken an extra pair of clothing, and so Srila Prabhupada lent him his sannyas clothes for the rest of the time that he was there.

Sri Nirmal Chandra often talked to his sons about how Vrindavan had changed from the time of his youth, when it was predominantly forests of trees and huts, and mostly renunciates, to all the large construction that currently seems to dominate the atmosphere.

In his last days, he was very attached to Sri Jiva Goswami’s Gopala Champu, which he would often read. A day before passing away he instructed his sons that their first bhajan was to take care of Sri Radha Damodar’s service, that all the aratis and offerings should be done properly and on time and all the festivals should be conducted nicely, and that with whatever other time they had to meditate on Sri Radha Damodar and do do their chanting.

As his health was failing his family requested him to go to a hospital in Delhi, and on his request he was taken to Jaipur because he felt a deep connection with the deities of Sri Radha Govinda and Sri Radha Gopinath who reside there.

He left this mortal world for the eternal realm on Ekadasi, on Thursday February 4th, 2016, during his favorite time of mangal arati. He is succeeded by his five sons to whom he has entrusted the care and worship of Sri Radha Damodar.

Sri Nirmal Chandra Goswami will be put into samadhi on Feb 15,2016. There will be a festival starting at 9.30 am with pushpanjali, akhanda harinam sankirtan and samadhi pratishta, and a feast at 1 pm. All are welcome.