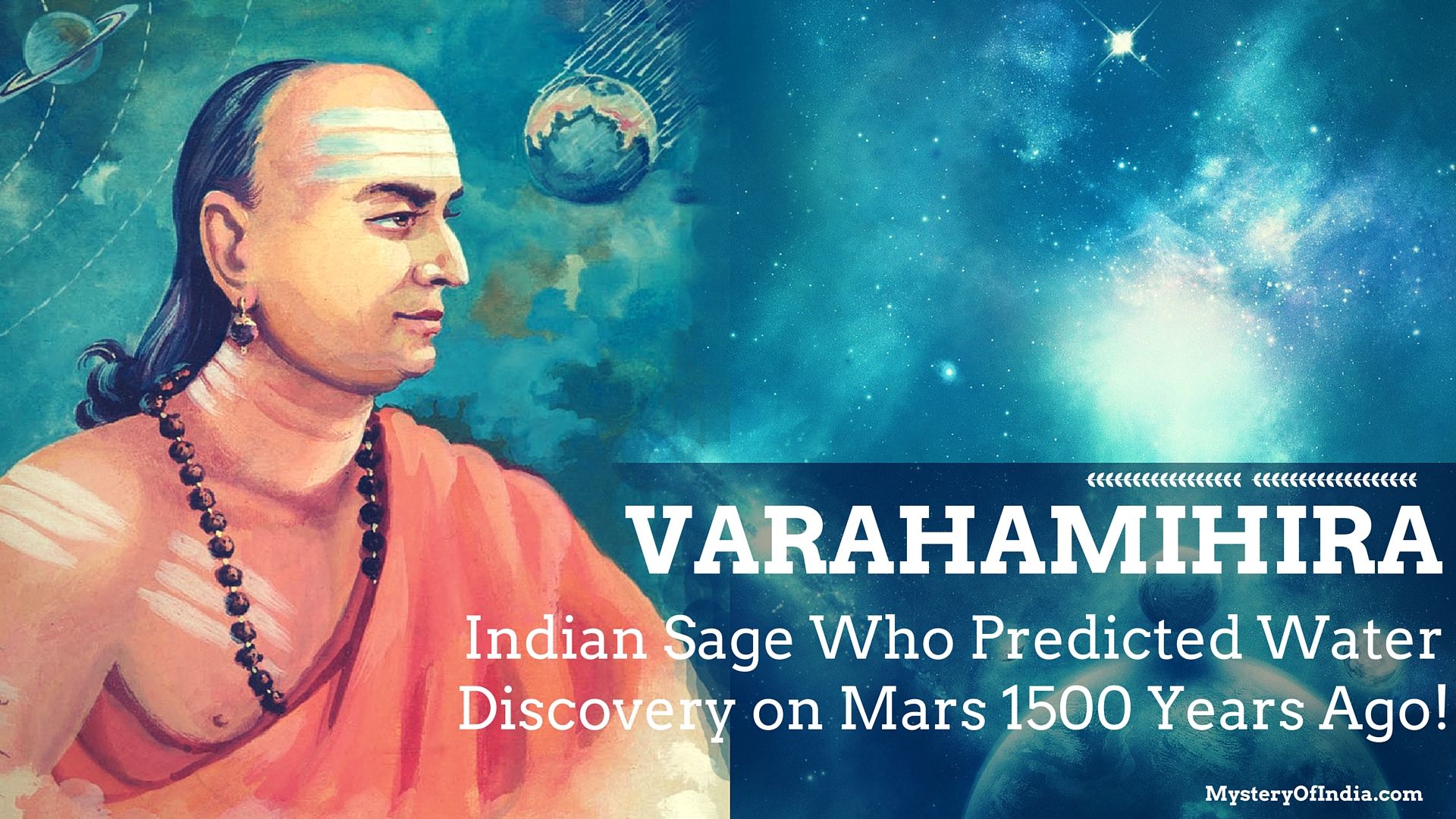 Indian astronomer, mathematician, and astrologer from Ujjain, Varahamihira in his book written 1500 years ago had mentioned so many insights about space and universe that has shocked the scientists of today.

Even thousands of years before, India had become famous and reached its pinnacle in astrological and astronomical sciences. Ancient Astrological works had been translated into many foreign languages. Ibn Batuta and Al Baruni were two prominent Arab travellers who had visited ancient India specially to pursue Astrology. By their translations they had induced German scholars to come to India to study Astrology and Vedic literature. Varahamihira was one of the only renowned Indian Astronomer, Mathematician and Astrologer whose name became a household word throughout India and it is said his near contemporaries Aryabhata and Brahmagupta even did not match with the popularity of Varahamihira.

Varahamihira was born in 505 A.D. into a family of Brahmins settled at Kapittha, a village near Ujjain. His father, Adityadasa was a worshipper of the Sun god and it was he who taught Varahamihira astrology. On a visit to Kusumapura (Patna) young Varahamihira met the great astronomer and mathematician, Aryabhata. The meeting inspired him so much the he decided to take up astrology and astronomy as a lifetime pursuit.

At that time, Ujjain was the centre of learning, where many schools of arts, science and culture were flourishing in the prosperity of the Gupta reign. Varahamihira, therefore, shifted to this city, where scholars from distant lands were gathering. In due course, his astrological skills came to the notice of King Yashodharman Vikramaditya of Malwa, who made him one of the Nine Gems of his court.

Varahamihira was learned in the Vedas, but he was not a blind believer in the supernatural. He was a scientist. Like Aryabhata before him, he declared that the earth was spherical.

In the history of science he was the first to claim that some “force” might be keeping bodies stuck to the round earth. The force is now called gravity. He proposed that the Moon and planets are lustrous not because of their own light but due to sunlight.

Varahamihira’s main work is the book Pancha Siddhantika (Treatise on the five Astronomical Canons gives us information about older Indian texts which are now lost). The work it seems is a treatise on mathematical astronomy and it summarises five earlier astronomical treatises, namely, the Surya Siddhanta, Romaka Siddhanta, Paulisa Siddhanta, Vasishtha Siddhanta and Paitama Siddhanta.

It is acclaimed that Pancha Siddhantika of Varahamihira is one of the most important sources for the history of Hindu Astronomy from before the time of Aryabhata.

Varahamihira in 550 AD have described a large number of comets in the Brhat Samhita. He wrote over sixty couplets about comets. He did not have the modern facilities like Telescope or other electronic equipment. He says that sages Garga, Parasara, Asita, Devala and others had already written about the comets.

He was also an astrologer and has written on all the three branches of astrology. His son Prithuyasas has also contributed in the Hindu astrology through his work, Hora Sara.

Varahamihira’s mathematical work included the discovery of the trigonometric formulas. He improved the accuracy of the sine tables of Aryabhata l. He defined the algebraic properties of zero as well as of negative numbers. Furthermore, He was among the first mathematicians to discover a version of what is now known as the Pascal’s triangle. He used it to calculate the binomial coefficients.

Varahamihira made some significant observations in the field of ecology, hydrology and geology too. He was the first person who predicted underground water. His claim that plants and termites serve as indicators of underground water is now receiving attention in the scientific world.

Varahamihira, without any scientific equipment, derived the true value of equinox. This value is very important for the modern day Geostationary Satellites.

It’s intriguing to know that during NASA’s Mars mission, Arun Upadhyay, a retired IPS, did a comparative study of Varāhamihira’s calculations about Mars and found certain similarities.

Though the original book of Surya Siddhanta till date remains untraced, but somehow a few scholars had taken their notes for their own research work. Many fear that the original version was stolen by the other astronomers from overseas. The present version of Surya Siddhanta, which is often used by Panchang experts to predict festive dates and nakshatras, was modified by Bhaskaracharya during the Middle Ages.

It is learnt, Varahamihira humbly said about his own treatises: “The science of Astrology is a vast ocean and is not easy for everyone to cross it. My treatises provide a safe boat.” Truly, even now they are acknowledged as masterpieces.