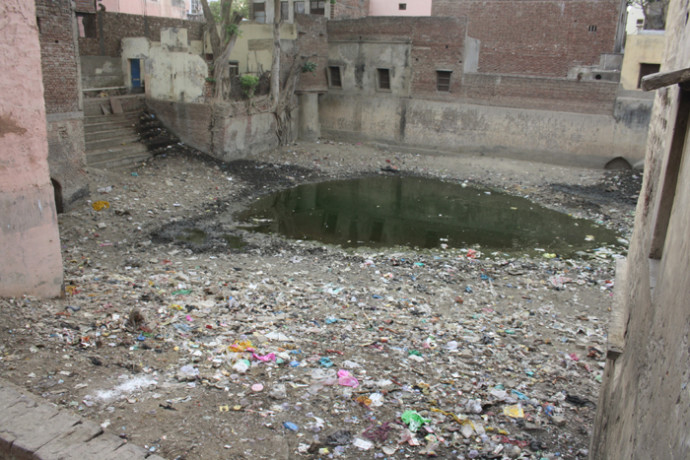 The ground water level is steadily going down in the city. The hand pumps installed by the Municipal Corporation are going dry along with the tanks and wells, increasing the water problem in Vrindavan.

The tanks and reservoirs are going dry resulting in low ground water recharging. The water level in wells is also decreasing rapidly because of the regular use of thousand of submersible pumps in the surrounding areas. Submersible pumps are dropped to natural underground reservoirs and extract large amounts of water for construction and other purposes.

Decades ago, the royal families constructed step wells (bawari) and tanks (talaab, kund) near temples and public spots which were used to refill with the help of the Vrindavan minor aquifers. But these aquifers have been dry for years now.

A few of the tanks in the city like Motijheel Kund are being revamped by the Tourism Department, due to which they can’t be refilled with water. This situation has prevailed for the last year or so. The condition of Govind Kund is also pathetic as the drains from the neighborhood are flowing into it.

The ancient Ganga Singh Kund (see featured image) is also dry and the people have made it a dumping ground to throw their garbage in. Davanala Kund is another one that has been refurbished nicely by Tourist Department, but has gone dry and become a garbage pit. Illegal encroachments are a problem everywhere.

Crores has been invested on installing water towers in Vrindavan, but these are still not all functional. DM Rajesh Kumar and CDO Manish Kumar Verma are inspecting the water towers built over the last five years. Complaints about the water supply from different areas of the town are increasing day by day.

Many of the water supply tanks are not working due to technical reasons for which city administration has done nothing, even after spending crores on their installation. DM Rajesh Kumar has now formed a committee of four members to inspect the problem and to make these water towers and supply tanks functional as soon as possible.

The Drought is worse this year

Seasonal drought takes place every year, but this year it seems to be worse than usual. According to the Water Resources Ministry, water level in 91 major reservoirs across the country have dropped to only 22% of capacity.

Agra, Allahabad and other urban centers along the Yamuna including Delhi are all experiencing water shortfalls.
Hathini Kund is at its lowest levels in thirteen years. This is not only affecting water supplies for all the shareholders who are allocated a portion of the Yamuna water, but also hydroelectric generation.

This year is already hotter than average, which is a tendency that is global in scope with the increasing effects of anthropogenic climate change. The rivers everywhere are shrinking as the temperature soars.

Due to lack of water, the offerings made by devotees increase the Yamuna pollution as flowers, garlands, vermillion and solid waste accumulate there instead of being washed away.

PM Modi recently spoke of the drought that is affecting a great portion of India. He said that there are encouraging predictions that say this year’s monsoon will bring 110% of the usual rainfall.

“To fight the drought and water scarcity, the governments will do their work. But I have seen people also make their own efforts. In several villages, an awareness has been seen with regard to the value of water and in such places, there is sensitivity and a will to do something to conserve,” he said.

Indeed without active participation of the public in water management and conservation, the situation is bound to become worse.