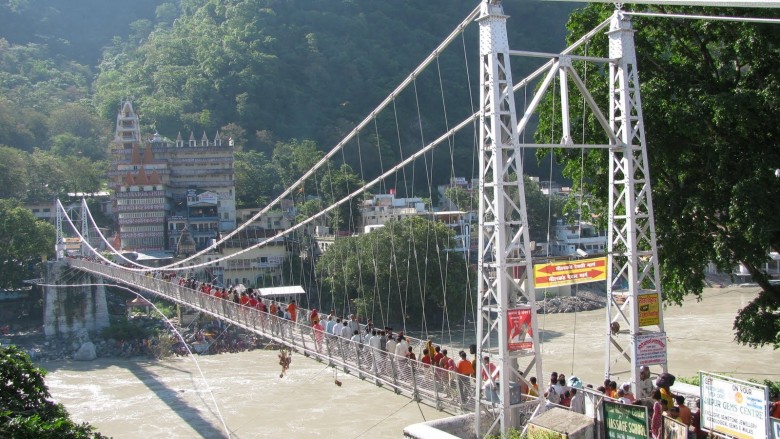 A plan to build hanging bridge on the Jugal Ghat at Vrindavan is in the works. The District Magistrate and SSP inspected the areas around the Yamuna on Tuesday. The other side of the river is also in the development plan for which areas have already been identified. The proposal will soon be submitted to the State Government now.

The Administration is preparing a blueprint to develop Vrindavan as a model city, which includes the revamping of riverbanks as well. District Magistrate Rajesh Kumar and SSP Dr. Lokesh Kumar inspected the area along with officers from PWD, Forest Department and Irrigation Department.

Rajesh Kumar told our correspondent that the hanging bridge is planned at Jugal Ghat for which the proposal will be submitted to the State Government soon.

The team has also identified places for future parking lots for as many as 500 vehicles on each side of the river. Around two kilometers of Yamuna bank will be built up as well for which the blueprint is under preparation.

The development plan also includes constriction of an auditorium to showcase the cultural heritage of Braja.

DM also informed that during the rainy seasons, the Yamuna rises to around 400 meters above sea level. In order to limit the expansion of river in such times, embankments will be developed to stop flooding.

Fountains will also be placed here and there to beautify the area further. 500 cusecs of fresh water will be available at all tines on the river fronts. DM also informed that the other side of the river will be developed as a forested area by planting trees traditionally associated with Braja culture. This area will be connected to the expressway.