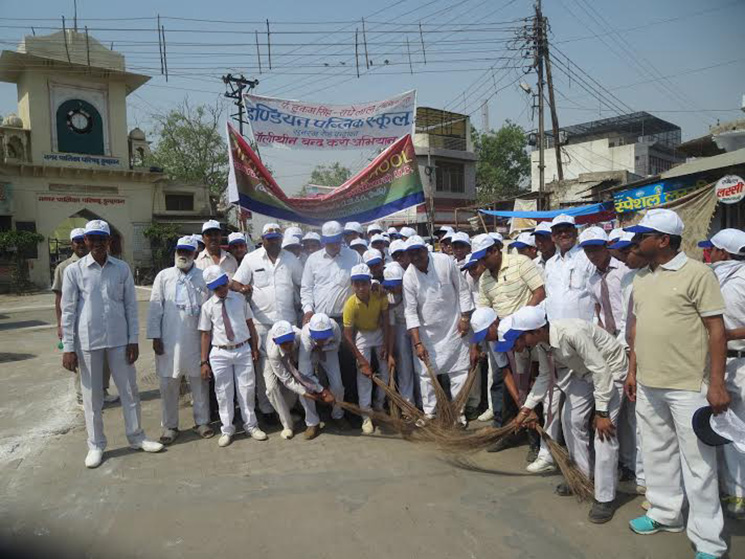 A cleaning drive was organized today by the Brijdham Vikas Trust and Vrindavan Bal Vikas Manch (Vrindavan Youth Development Movement). 24 different locations in Vrindavan were chosen to begin the drive. Students and members of Vrindavan Anurag Project from those areas joined together with Municipality sanitation workers to clean up the town. At the rally, participants took a vow to keep the city clean.

Addressing the large number of students who attended in the thousands, chief guest City Magistrate Ram Araj Yadav beginning of sanitation said that the cleanliness drive begins with each individual and in the home. The problem is not a lack of resources, but behavior. “Does anyone like to live in filth?” he asked the crowd. No one likes dirt, but no one wants to take the responsibility in keeping the city clean.

Infinity Krishna Bhumi senior administrator Ravi Shankar said that Vrindavan is a holy city full of temples. It is the Lord’s own abode, Golok. It is a great good fortune and privilege to engage in the humble service of cleaning the Dham. If the students so desire, then Vrindavan can be as clean and proper as Chandigarh, which last year was named the cleanest city in India by the Ministry of Urban Development.

If this awareness of cleanliness spreads to every neighborhood in the town, then 75 percent of the problem will be cleared.

Vrindavan Municipality Council Chairman Mukesh Gautam said that Vrindavan is becoming a spot on the the World Religious tourism map. Thousands of tourists and pilgrims come here every day and this is naturally causing a stress to the city’s sanitation work. There is an insufficiency of cleaning workers and general lack of resources for cleaning, so it is no surprise that it is hard to keep up. Nevertheless, the Municipality is working hard to improve services. Still it is important to get the cooperation of the citizens. All those who are volunteering today should vow to help maintain the cleanliness henceforth.

Some 3000 students from a large number of schools in the town participated in the Abhiyan.