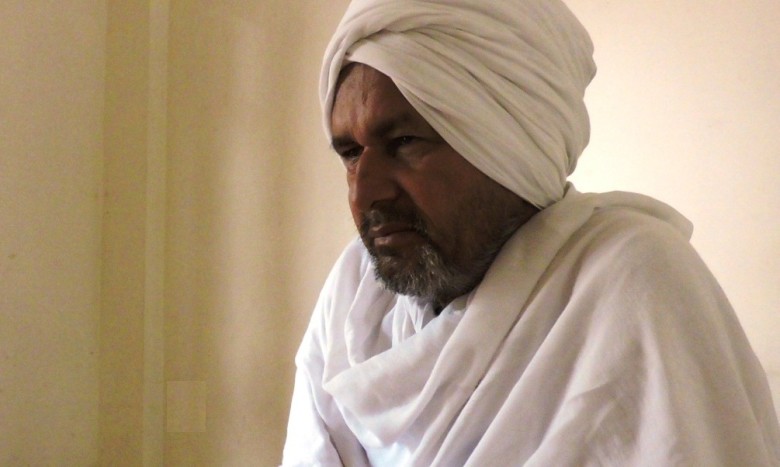 With the recent announcement by government officials that they will finally build a sewage canal or sewer parallel to the Yamuna in the Vrindavan-Mathura area, we at VT decided to go and see Sant Jai Krishna Dasji, the leader of the Yamuna Rakshak Dal. Jai Krishna Dasji has made his principal objective the construction of such a parallel system to deal with waste water from municipalities and industries and prevent it from being poured into the holy river itself. We thought our readers would be interested in knowing his reaction.

Jai Krishna Das and the Yamuna Rakshak Dal now have their headquarters at the Govinda Math in Kaimar Van, just near the Parikrama Marg next to the railroad tracks. The Math covers a fairly large area. Like many ashrams, it has developed haphazardly over the years, but there are signs that the acharya, Swami A.S. Vigyanacharya, is becoming popular can be seen in the many construction projects that are either active or have been recently completed.

There is a large new covered yajna shala, where ashram residents are engaged in a 24-hour havan. Swamiji is a Shaiva and does havan with the om namah shivaya mantra. The Swamiji also takes part in these daily rituals, but is currently following a three-year vow of silence. Some of the land is still used for agriculture and there is, of course, a small coterie of cows.

We met Jai Krishna Das in his spare office, which consists only of a desk and a few chairs. A few of his associates were there. The Yamuna Rakshak Dal was originally formed in Barsana under the guidance of Shri Ramesh Baba, but due to policy differences, Jai Krishna Dasji decided to move to Vrindavan and to continue his efforts on behalf of the Yamuna from his new office.

Jai Krishna Das is originally from a rural part of Bihar. He came to Braj to serve Radha and Krishna and do bhajan, but he was inspired by Ramesh Baba’s message of service to the Dham. He participated in the movement to save the Braja hills, but has now dedicated his life to the restoration of the Yamuna to its pristine glory of yore.

He has the grave look of a peasant revolt leader from the pre-Independence period. None of the delicacies of a jet-set guru, or a hobnobber of the elites. His Hindi began with an attempt at a classical form of Hindi, but quickly reverted to a speech that was straightforward, no-frills argumentation.

Babaji spoke to the VT team with great vigor, beginning with a repetition of his “stump speech.” He recounted his own history a little in the movement, recalling the different marches along the banks of Yamuna from Allahabad to Jantar Mantar in Delhi, to Hathini Kund and as far as Yamunotri, researching and raising awareness of the impending ecological catastrophe that comes when one of north India’s vital lifelines becomes nothing more than an open sewer from Delhi to Agra.

VT: So please tell me something about the yourself and about the Yamuna Rakshak Dal?

Babaji: I was born in Bihar where I have seen the nature very closely. We were so disciplined to use the water those days. Nowadays, the problem of water is getting big, and no one is taking initiative to solve it, no one is thinking of how to protect the generations that will follow. The Yamuna is one of the main rivers of India and has been its life line for centuries. It’s importance is not just that it is a holy river, but comes from the pure water which gives life not only to humans but to other living beings also. But nowadays, it is being abused in numerous ways. So to counteract that the Yamuna Rakshak Dal (YRD) was formed in the Govind Math Ashram of Vrindavan, which is the Yagya Bhumi of Swami A.S. Vigyanacharya. I’ve walked along the banks of Yamuna, from Yamunotri to Allahabad, to raise awareness of these issues.

VT: Can you please elaborate on the problems of the Yamuna?

Babaji: The Yamuna is facing problems not only because of the illegal encroachments in the floodplain, which has limited the width of the river, but also because of the hundreds of thousands of sewer lines flowing into it. And that polluting begins right from its source at Yamunotri all the way to Allahabad. The water of Yamuna is blocked and diverted at Hathani Kund. The best that we are being offered by the Government is that instead of getting sewage and chemical waste, we will get treated water from sewage treatment plants, which won’t be tolerated.

VT: What is the goal of YRD?

Babaji: We want fresh Yamuna water from Hathani Kund, and that’s what we are fighting for. Treated water is being offered just to make fools out of the devotees, and we won’t tolerate that. The devotees should get the pure Yamuna water, directly from Hathanikund.

VT: What do you think is the main cause behind the pollution in Yamuna?

Babaji: The uncontrolled and unplanned sewer lines, illegal encroachment on the flood plains, lack of public awareness and Government inaction has been the root cause of the pollution in the holy river. The uncontrolled sewer lines in the cities are polluting the river to the core, and are the cause of the river’s death. The villages do not spoil the environment and the river; all that is coming from the cities who are desecrating the Yamuna by dumping garbage and sewer water into it.

VT: You yourself said that the problem of Yamuna pollution extends from Yamunotri to Triveni, so why are you fighting mainly for the purification of Yamuna in the Braja area?

Babaji: We want to make Vrindavan a model city by purifying the Yamuna here first, and then that model will be replicated in other cities including Delhi. The Haryana Government has published a public awareness notice few days back, which stated not to use Yamuna water for irrigation, as it will pollute and destroy the crops. If Yamuna in Vrindavan is pure, it will automatically be purified at other places too. The battle has just begun.

VT: How do you think Yamuna can be purified?

Babaji: The Government has to take proper steps to purify Yamuna, and so do the society as well. Every person has to take the initiative to make the river pure. YRD is just a medium, and we are doing what we can do with our limited resources. But it’s the government who has the capability to purify the holy river. It’s a shame that nothing has been done so far, and that’s the reason we are conducting protest marches and rallies to wake the government.

VT: There are many other organisations also who are working to make Yamuna clean, what do you want to say about them?

Babaji: People who say that they will make Yamuna clean are either fools or frauds. We can’t clean the pollution in Yamuna as this is not the river in real. The water of the holy river is locked in Hathani Kund and we want that. The water in Yamuna these days is the treated water from the sewer pumping stations.

VT: The State Government is working on a detailed project report to make a parallel drainage system across Yamuna, which will be 20km long, are you satisfied with that?

Babaji: Only 20km of the drainage system won’t help, as the sewer line will flow again the holy river after that. We want a parallel drainage system all the way from Yamunotri up to Triveni to prevent the sewage water from falling into the river. There can be sewer water treatment plants in between to treat the drain water and provide it for irrigation. The government has talked much about these plans also in the past as well, but nothing has been done so far. So now they are talking again. We are just eager to see some real actions.

VT: What has YRD done so far to achieve the goal of a pure Yamuna?

Babaji: As I have already mentioned, YRD is doing its level best with the limited resources. Yamuna Rakshak Dal is taking steps to spread awareness by organizing public rallies and camps at various places. We have already hosted many rallies in the past due to which you can see some action from the Government now. But we need more people to spread more awareness among the people and to regain the lost glory of the holy river Yamuna.