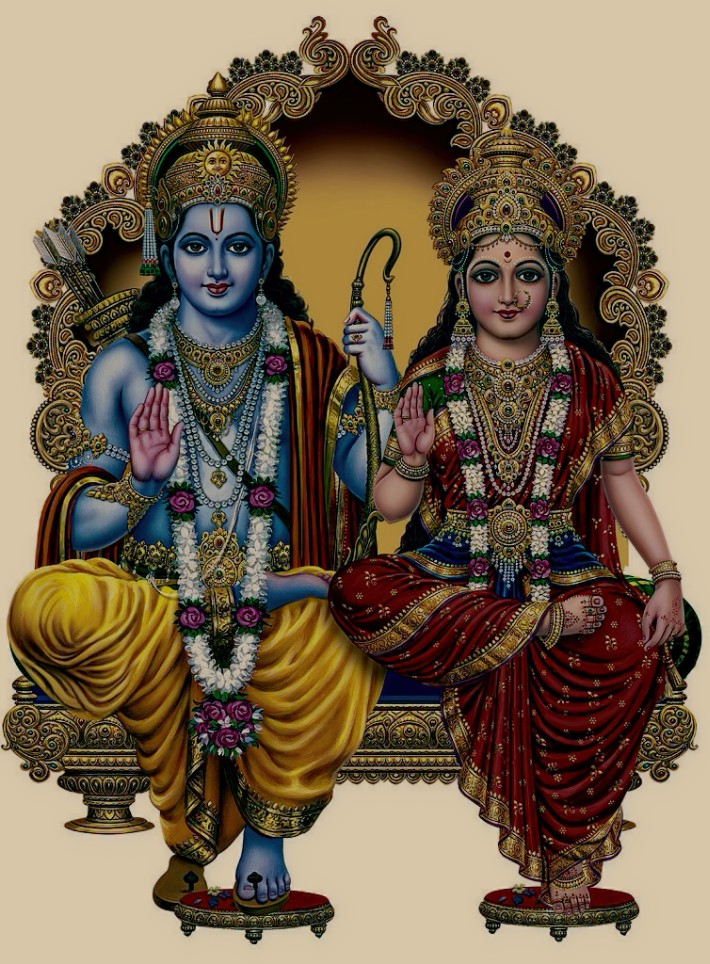 Chivalrous leaders guided by wise, Self controlled ministers will ensure the development of a peaceful society.

Amongst the human beings, the king is the representative of Krishna because Krishna is the maintainer of the universe, and the kings, who are appointed on account of their godly qualifications, are maintainers of their kingdoms. Kings like Maharaja Yudhisthira, Maharaja Parikshit and Lord Rama were all highly righteous kings who always thought of the citizens’ welfare. – Bhagavad gita 10.27, purport

Lord Rama was so saintly that people even now are anxious to live in the kingdom of Lord Rama (rama rajya), but Lord Rama never showed any cowardice. Ravana was an aggressor against Rama because Ravana kidnapped Rama’s wife, Sita, but Lord Rama gave him sufficient lessons, unparalleled in the history of the world. – Bhagavad gita 1.36, purport

The Srimad Bhagavatam compares the four divisions of society to the different parts of the body the head, the arms, the belly, and the legs. Just as all parts of the body cooperate to keep the body fit, in the ideal state all sections of society cooperate under the leadership of the brahmanas. Comparatively, the head is the most important part of the body, for it gives directions to the other parts of the body. Similarly, the ideal state functions under the directions of the brahmanas, who are not personally interested in political affairs or administration because they have a higher duty. At present this Krishna consciousness movement is training brahmanas. If the administrators take our advice and conduct the state in a Krishna conscious way, there will be an ideal society throughout the world. – Journey of Self Discovery 7.1

So ideal state means the king must be very responsible. There are many instances. Just like Yudhisthira Maharaja, who was a pious king. In Bengali there is a proverb rajar dose raja nasto dose grihastha bhrasta. If the king is not pious, then the whole kingdom is spoiled. Everyone has got this experience. So, the king must be very honest, pious, and religious. Such kings were called rajarsis. Although they were kings, they were great saintly people. . . . If the king is educated nicely in spiritual affairs, if he knows what the purpose of kingdom is, then all citizens automatically become religious, purposeful. And if the king is a rascal, naturally all others will follow, and they will become rascals. – Bhagavad gita 2.32, London, September 2, 1973

A king’s qualification is judged by the temperament of the people in the kingdom. If they are happy in all respects, it is to be understood that the king is honest and is executing his duties rightly. Krishna said that the king in whose kingdom the citizens are happy is very dear to Him. – Krishna Book, Chapter 52

Kings Must Act Under Superior Guidance

Prabhupada: Yes. That is the best quality of state. If we abide by the orders of God, or the king or the government abides by the order of God, that is ideal state.

Hayagriva: He says, “Thus the constitution of the state would be theocratic, but man as priest receiving his bequest directly would build up an aristocratic government,” like the brahmanas would receive the knowledge from God.

Prabhupada: That theocratic government is Manu sahhita. That is Vedic literature given by Manu for the benefit of the human society.

The state should always serve the devotees of the Lord, and the ideal state should conduct itself according to the instructions of the devotee. Because King Prithu followed this principle, he is highly praised. – Srimad Bhagavatam 4.16.17, purport

The Myth of Democracy

An ideal king thoroughly trained by culture and devotional service with the martial spirit makes a perfect king. Such a personal monarchy is far better than the so called democracy of no training and responsibility. The thieves and rogues of modern democracy seek election by misrepresentation of votes, and the successful rogues and thieves devour the mass of population. One trained monarch is far better than hundreds of useless ministerial rogues, and it is hinted herein that by abolition of a monarchical regime like that of Maharaja Parikshit, the mass of people become open to many attacks of the age of Kali. They are never happy in an overly advertised form of democracy. – Srimad Bhagavatam 1.18.43, purport

Due to the termination of the monarchical regimes and the plundering of the people’s wealth by rogues and thieves, there will be great social disruptions. People will be killed and injured, and animals and women will be stolen. . . . The so called democrats capture the administrative machine without assuming responsibility for the prosperous condition of the citizens. Everyone captures the post for personal gratification, and thus instead of one king, a number of irresponsible kings grow up to tax the citizens. It is foretold herein that in the absence of good monarchical government, everyone will be the cause of disturbance for others by plundering riches, animals, women, etc.- Srimad Bhagavatam 1.18.44, purport

Without religious principles what is the difference between a dog and a man? Man can understand religion, but a dog cannot. That is the difference. So if human society remains on the level of dogs and cats, how can you expect a peaceful society? If you bring a dozen dogs and put them together in a room, will it be possible to keep them peaceful? Similarly, if human society is filled with men whose mentality is on the level of dogs, how can you expect peace? – Science of Self Realization, Chapter 6

The asuras want to enjoy a life of sense gratification, even at the cost of others’ happiness. In order to fulfill this ambition, the asuras, especially atheistic kings or state executive heads, try to equip themselves with all kinds of deadly weapons to bring about a war in a peaceful society. They have no ambition other than personal aggrandizement, and thus mother earth feels overburdened by such undue increases of military strength. By increase of the asuric population, those who follow the principles of religion become unhappy, especially the devotees, or devas. – Srimad Bhagavatam 1.16.34, purport

Whenever there is some negligence on the part of the king in discharging his duty, the intelligent class of men must dethrone him. The intelligent class of men, however, do not occupy the royal throne, because they have much more important duties for the welfare of the public. Instead of occupying the royal throne, they prayed for the incarnation of the Lord, and the Lord came as Maharaja Prithu. Real intelligent men, or qualified brahmanas, never aspire for political posts. Maharaja Prithu excavated many produces from the earth, and thus not only did the citizens become happy to have such a good king, but the complete sight of the earth also became beautiful and attractive. – Srimad Bhagavatam 1.3.14, purport

Ideal Qualities of a King

Although Prithu Maharaja was factually an incarnation of the Supreme Personality of Godhead, he rejected those praises because the qualities of the Supreme Person were not yet manifest in him. He wanted to stress that one who does not actually possess these qualities should not try to engage his followers and devotees in offering him glory for them, even though these qualities might be manifest in the future. If a man who does not factually possess the attributes of a great personality engages his followers in praising him with the expectation that such attributes will develop in the future, that sort of praise is actually an insult.- Srimad Bhagavatam 4.15.23, purport

An Ideal King does not Take Credit

As an ideal king, Maharaja Prithu is compared to the earthly planet, for even though some citizens might violate the rules and regulations of the state, he would still be tolerant and maintain them with fruits and grains. In other words, it is the duty of the king to look after the comforts of the citizens, even at the cost of his own personal convenience. This is not the case, however, in Kali yuga, for in Kali yuga the kings and heads of state enjoy life at the cost of taxes exacted from the citizens. Such unfair taxation makes the people dishonest, and the people try to hide their income in so many ways. Eventually the state will not be able to collect taxes and consequently will not be able to meet its huge military and administrative expenses. Everything will collapse, and there will be chaos and disturbance all over the state – Srimad Bhagavatam 4.16.7, purport

Parikshit Maharaja was an ideal king and householder because he was a devotee of the Personality of Godhead. A devotee of the Lord automatically has all good qualifications. And the Emperor was a typical example of this. Personally he had no attachment for all the worldly opulences in his possession. But since he was king for the all around welfare of his citizens, he was always busy in the welfare work of the public, not only for this life, but also for the next. He would not allow slaughterhouses or killing of cows. He was not a foolish and partial administrator who would arrange for the protection of one living being and allow another to be killed. Because he was a devotee of the Lord, he knew perfectly well how to conduct his administration for everyone’s happiness men, animals, plants and all living creatures. He was not selfishly interested. Selfishness is either self centered or self extended. He was neither. His interest was to please the Supreme Truth, Personality of Godhead. The king is the representative of the Supreme Lord, and therefore the king’s interest must be identical with that of the Supreme Lord. The Supreme Lord wants all living beings to be obedient to Him and thereby become happy. Therefore the king’s interest is to guide all subjects back to the kingdom of God. Hence the activities of the citizens should be so coordinated that they can at the end go back home, back to Godhead. Under the administration of a representative king, the kingdom is full of opulence. – Srimad Bhagavatam 1.4.12, purport

To cut off all family affection means to broaden the field of activities. Without doing this, no one can be qualified as a brahmana, a king, a public leader or a devotee of the Lord. The Personality of Godhead, as an ideal king, showed this by example. Sri Ramacandra cut off the tie of affection for His beloved wife to manifest the qualities of an ideal king. – Teachings of Queen Kunti, Chapter 24

In the Parasara smrti, or religious codes made by Parasara, the great sage and father of Vyasadeva, it is stated:

“The ksatriya’s duty is to protect the citizens from all kinds of difficulties, and for that reason he has to apply violence in suitable cases for law and order. Therefore he has to conquer the soldiers of inimical kings, and thus, with religious principles, he should rule over the world.” – Bhagavad gita 2.32, purport