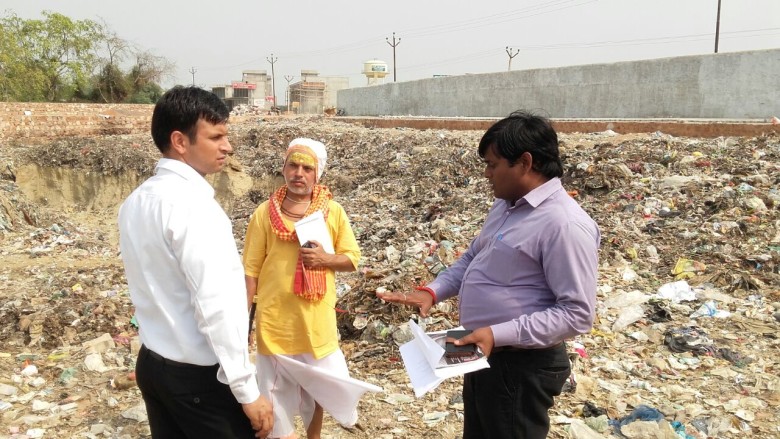 Poor state of garbage management was found in Vrindavan during the surprise visit of the representative appointed by the National Green Tribunal (NGT) on Saturday. The Municipality had earlier claimed in the Green Court that the waste management of the town was under control and was being effectively executed.

Advocate Rahul Khurana was appointed local commissioner by the NGT, to submit a comprehensive report in relation to the collection, dumping, transportation and burning etc. of the municipal solid waste in the city with particular reference to the sites. This order came after the counsel of the petitioner Shri Madhumangal Shukla submitted the photographs of indiscriminate garbage dumping in Vrindavan. The photographs of the garbage being burnt were also shown to the court.

Shri Khurana reached Vrindavan at 1 p.m and took a general round of the town and made visit to the sites related to the garbage disposal. He made visits to the Principal Garbage Station situated near the 100 bedded hospital, Satellite dumping stations and the Yamuna Bank. He was accompanied by the Executive Officer, Shri Ram Asre Kamal and the petitioner Shri Madhumangal Shukla.

After almost six hours of investigation, Shri Rahul Khurana found the entire garbage management system was collapsing in Vrindavan. He found that the garbage was piled up outside the designated garbage station. He found half constructed trenches in the current landfill site, and didn’t find any construction labor present there building the trenches. The Executive Officer clarified that due to the construction of the trenches the garbage was dumped outside the garbage station.

Shri Khurana was disappointed with the foul smell coming out of the garbage. He found that the municipality didn’t make any effort to spray the foul smell deterrents. Moreover, the commissioner found the water was running into the garbage dumps from a water tanker at the landfill site. The presence of water tanker indicated that the water was being used to extinguish the fire. Shri Khurana objected to the Executive Officer on using the water on the landfill site, as it might pollute the underground water table.

After making the visit to the main landfill site the court’s representative went to the areas of Cheer Ghat, Shringarvat, Keshi Ghat, Tatiasthan, Chaitanya Kuti where he found heaps of accumulated garbage being dumped indiscriminately on the open road. He also found that the garbage was being burnt at Shringarvat.

Spat between the Petitioner and the Executive Officer erupted on several occasions in front of the Local Commissioner. The local people were seen appreciating the petitioner for taking up the issue with the green court, where as they blamed the municipality for not managing the garbage properly.