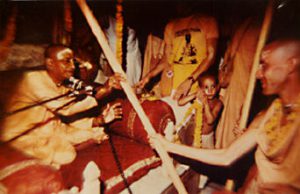 The following sannyasa initiation lecture was given by Srila Prabhupada in Mayapura on Gaura Purnima, March 16th 1976. On this day, Swami B.G. Narasingha Maharaja accepted the renounced order from His Divine Grace.

So this purificatory process… According to Vedic system, there is purificatory process. Janmana jayate sudrah. “By birth everyone is born a sudra.” A sudra means without any knowledge and simply full of lamentation. Socati. So the Vedic process is that, from the low-grade position, to bring the human society to the highest, topmost position. Generally it is… The first, topmost position is to become a brahmana in the society. Catur-varnyam maya srstam guna-karma-vibhagasah (Bg. 4.13). Four divisions of the social system are there according to quality and work. That is very natural in this world. Everyone is accepted on quality and work. If you have got a qualification of a good lawyer and if you have done very nicely your activities, then you are selected as the high-court judge. The high-court judge is selected amongst the lawyers in the court. It is not appointed from outside. The… A lawyer who has done his legal profession very nicely, the government offers him the post, that “You become a high-court judge.” So this quality and work is estimated everywhere and in all circumstances. So Bhagavad-gita recommends—Krsna says personally, the Supreme Personality of Godhead—catur-varnyam maya srstam guna-karma-vibhagasah (Bg. 4.13). So that process is applicable at all times. And Narada Muni, he also gave description to Yudhisthira Maharaja while they were talking about the varnasrama. So Narada Muni gave different symptoms of different varna: brahmana, ksatriya, vaisya, sudra. Then, at the conclusion, he said,

He never accepted this, that by birth, no. Either he is a brahmana or he is a sudra, by caste or by birth, kiba vipra kiba sudra nyasi kene naya, either he’s a grhastha or a sannyasi, it doesn’t matter. He can become a guru. How? Yei krsna-tattva-vetta. One who knows the principles of Krsna consciousness, one who understands Krsna, he can become a guru. So guru is the post given to the sannyasis, to the brahmanas. Without becoming a brahmana, nobody can become a sannyasi, and sannyasi is supposed to be the guru of both all the asramas and all the varnas. So the preaching work… We require so many sannyasis. People are suffering all over the world for want of Krsna consciousness. My Guru Maharaja used to say that there is no scarcity. This is false propaganda. The only scarcity is that there is no Krsna consciousness. That is the difficulty. Actually that is the fact.

Take some practical example. I have traveled all over the world many times. I have seen America from village to village, Africa, Australia. There is so much land vacant that if we properly utilize that, we can produce so much food grains that we can feed ten times as many population as it is now. That’s a fact. We do not utilize the land properly. And Krsna has given us the formula, annad bhavanti bhutani: “You produce anna.” Annad bhavanti bhutani. Then the animals and the human being will be well-fed and they will be happy. If anyone, either animal or man has his belly filled up with sufficient food, he’ll never be dissatisfied. That is the nature. So unfortunately we are not following the instruction of Bhagavad-gita. If we follow the whole social system, political system, economic system of the whole world will be very, very nice, and everyone will live very peacefully and there will be no fight, no ism, no schism. Everything will be all right. That is the purpose of Krsna consciousness. Don’t think that Krsna consciousness is a matter of sentiment. No, it is practical. The…

Just like in America they produce huge amount of grains. Sometimes they throw it in the sea on account of overproduction. Why overproduction should be given on the sea? It should be utilized. There are so many people starving. But this political situation is there that everyone is thinking “This is my country. This is my home. This is my land.” This is called maya. Aham mameti [SB 5.5.8]. Janasya moho ‘yam aham mameti. Everyone is under this impression, “I am this body, and anything belonging to this body, that is mine.” or “my nation.” This conception should be given up. That is Krsna consciousness. Isavasyam idam sarvam (Isopanisad mantra 1). Everything belongs to the Supreme Lord. In the Bhagavad-gita also, the same thing is confirmed.

The santi… Everyone is trying to have peace-peace of the mind, peace of the society, peace of the nation. Very good. But you do not know how to get this peace. That is described in every Vedic literatures. Therefore Vedic knowledge is so important. Nityo nityanam cetanas cetananam (Katha Upanisad 2.2.13). The Supreme Lord is the leader. He’s also a living being like us. He’s not a dead stone. He is… Just like Krsna. When He comes, He lives like us, just like human being. So similarly the… No, not similarly. Krsna is a living being like us. He has got also two hands, two legs, one head, as you have got. But what is the difference between you and Him? The difference is that eka, that singular number living being, vidadhati kaman bahunam, He maintains everyone, and we are maintained. That is the difference. We plural number living entities, we are maintained, and He, the Supreme Lord, being Supreme Being…

In the dictionary, English dictionary, God means Supreme Being. So Supreme Being, He’s also living being. He’s not a dead stone. The difference is that He is the maintainer, and we are maintained. He is the ruler; we are ruled. This difference we have to understand. And He is the proprietor; we are servants. Caitanya Mahaprabhu’s philosophy is this. That is a fact. Jivera svarupa haya nitya krsna dasa (Cc. Madhya 20.108-109). So this consciousness, Krsna consciousness, is being spread all over the world for the peace of the world, for the peace of the mind, for the peace of the society. So take it very seriously. It is very authorized. It is not a concocted speculation, it is fact. And it is happening so. Now these American boys and girls who have come, spending thousands of rupees here… And they have no such distinction that “Here is Indian. He is African. He is brahmana. He’s ksatriya.” Why? Because they have taken to Krsna consciousness.

This is Caitanya Mahaprabhu’s mission.

And that is being done. And the people from all parts of the world, they are responding. There is very, very good scope for spreading this Krsna consciousness movement, and learned circle, important men in all parts of the society and world, they are appreciating this mission. Bharata-bhumite manusya… It was Caitanya Mahaprabhu’s desire that especially those who are born in India, and especially in Bengal, because Caitanya Mahaprabhu appeared in this land of Bengal, so it is the duty to spread this Krsna consciousness movement. But unfortunately they are not coming forward.

Anyway, it doesn’t matter whether he is Bengali or am Hindu or Muslim. Anyone who knows the science of Krsna, he can spread this Krsna consciousness movement. And there is great necessity, great necessity. And the preaching work is meant for the sannyasis. So we have got some sannyasis who are doing very nicely, so today we shall make a number of sannyasis more to spread Krsna consciousness all over the world. And those who are going to take sannyasa, they should remember how much responsibility they have got. So live like a very strict sannyasi. Caitanya Mahaprabhu took Himself sannyasa at the age of twenty-four years. So it is not that in old age one has to take sannyasa. That is not in the sastra. From brahmacari asrama one can enter into the grhastha-asrama or vanaprastha-asrama or sannyasa-asrama as he thinks fit. There is no such rules and regulation that only the old man without any energy, he’ll take sannyasa. No. Rather, the young men…

Just like Caitanya Mahaprabhu did personally. He was twenty-four years old. He had beautiful wife, young wife, sixteen years old, at home, very, very affectionate mother, and His position was very great. Not as a brahmana, but still, as young man He could collect 100,000’s of men by His order only, to make civil disobedience movement upon the Kazi, in this land. So the civil disobedience movement was started by Caitanya Mahaprabhu for a good cause. So there are so many things. I especially appeal to the native of this land to take part in this movement of Caitanya Mahaprabhu for the benefit of the world. And we are trying to construct a very attractive temple here. Let them cooperate. It doesn’t matter whether he is Hindu, Muslim. Caitanya Mahaprabhu is for everyone. Caitanya Mahaprabhu accepted Haridasa Thakura as His chief disciple. Haridasa Thakura was born in a Muhammadan family, and his mission was to introduce this Hare Krsna mantra chanting.

Prabhupada: And He made Haridasa Thakura Namacarya, the acarya to introduce Hare Krsna mantra, and Haridasa Thakura was chanting three lakhs, counting daily. That means the whole day and night. So, so nice movement, everyone should take part in it and dedicate to the mission of Sri Caitanya Mahaprabhu. And it is not at all difficult. It is very easy. Caitanya Mahaprabhu said,

Thank you very much.