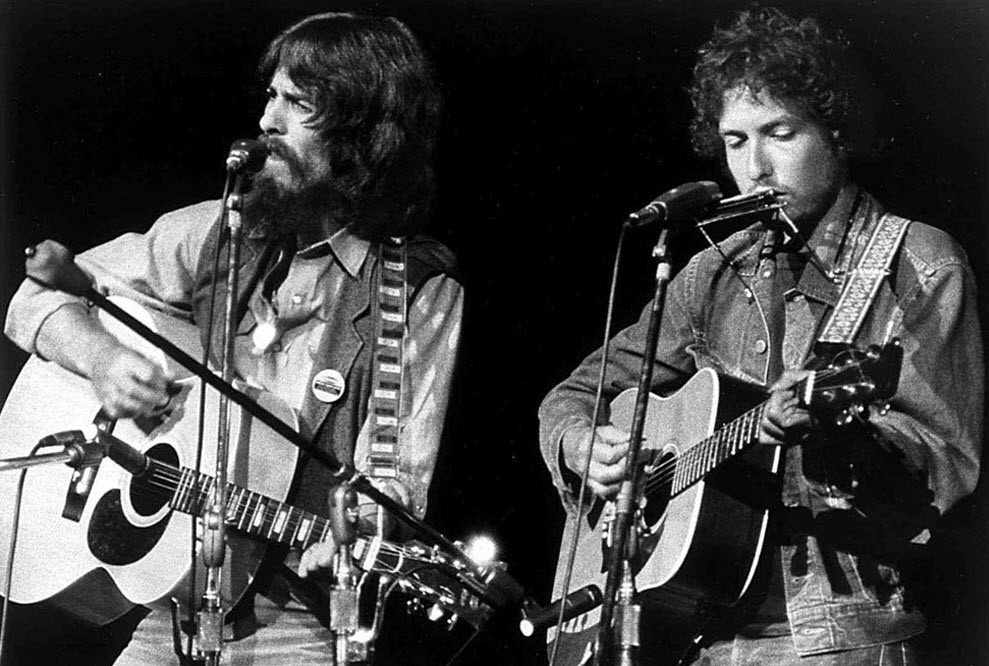 There are a few ISKCON old-timers, relics of the ’60’s—including me—who feel that Dylan was sort of planted into the wonderland of that era’s counter culture by a guiding hand of destiny. Much of his influence was positive in directing the young people away from a stone-like social order that was on the verge of self-destruction with the Viet Nam War in full swing and a giant Cold War overhead. His anti-establishment message has led us to consider that at least a few of his songs were at least a little prophetic.

Was Dylan empowered to sing of the coming of the Acharya of the Shri Chaitanya Mahaprabhu line of disciplic succession? As crazy as it sounds, at least to some disciples it makes perfect sense that he could be the prophetic voice of a minstrel who was planted by the will of the Supreme Lord into the crowd of the day’s social rebels. In his song “Lay Down Your Weary Tune”—reminiscent of the Bhagavata’s 2nd canto of describing the Supreme Lord in Nature—he sang of God’s endless orchestra in the sky and ocean. Many devotees consider that his “Mr. Tambourine Man” is a prophecy of the coming of Shrila Prabhupada and of the sankirtana movement. His “It’s All Over Now, Baby Blue” speaks of the hopelessness of modern civilization.

Sometime around ‘73 two Krishna devotees traveled with Dylan across USA on an immortal dharma bum adventure that led right to the lotus feet of Lord Rukmini-Dwarakadhisha at LA’s New Dwaraka Dham. Dylan’s cross country roll with these two devotees, Sheena and Pavanadeva, is the stuff of legends. The story goes beyond any “on the road” saga ever written by the likes of Ginsberg, Kerouac or Burroughs.

In a letter to me Shri Pavanadeva Prabhu himself puts the pieces of the puzzle together. This stuff is pure Dylan, and pure Krishna, too …

I bow down before you. All glories to Shrila Prabhupada. Forgive me for not replying yet. I had told the whole Dylan story to Shrimati Arundhati Mataji but I couldn’t find it to forward to you, so here it is again:

Sheena and I had been living in Manhattan in a loft belonging to wannabe folk singer David Peele. He had a bunch of guests over one evening, and boastfully held up his address book, and claimed to have everyone’s phone number. So I said, ok, what’s Bob Dylan’s? He opened it, read a number, and I called it.

A woman answered, and I asked to speak to Bob Dylan. She said he wasn’t there, could she take a message? I left my name and the number at that flat, and the next day, Dylan called, asked me what I had wanted. I said that I wanted to meet him. He asked me what for. I said, “for inspiration.” He said he’d meet me on a certain corner in the Village in an hour. Sheena and I got a cab and went down there. We were standing on that corner for a few minutes, and Dylan drove up in a big, blue van.

We got in, he drove to a dock somewhere, parked with the back of the van facing the river, we opened the back doors, and sat there talking and passing Sheena’s guitar back and forth, he’d play a song, then Sheena would. He talked about a desire he had to buy some land in California and start a commune. We said we hoped we could be some of the founding members. Eventually we parted and took another cab back to Peele’s.

A few days later we had some kind of falling out with Peele and moved out. Sheena had a lot of stuff and the only one I knew with a van was Dylan. I called him up, asked if he could bail us out and take us and our stuff up to my mother’s place in Middletown, and he said ok.

We loaded up his van and drove the 90 minutes to my Mom’s. He sat in the kitchen with my artist-Mom, talking about painting, while she and I carried all our stuff up to the attic. When we were done, Dylan said “well, see ya later, I’m heading out to California.” And we said, “Well, can we go with you, maybe help you get that commune started?” He said, “OK, let’s go.”

I actually did most of the driving, Dylan paid for all the gas. We talked about Krishna and Shrila Prabhupada, and stopped in at the Temple in Chicago to get Dylan some japa beads. We stopped at Dennis Hopper’s in New Mexico.

We looked at land for sale in Oregon and down the coast in California, and eventually, he dropped us off at the Watseka Temple in Culver City.

Saw him once more when he came by, asking me if I’d help him with something. He took me to Malibu, to Debbie Reynold’s house. She wasn’t home, but had told him that if he dismantled the deck covering her swimming pool, he could have the wood, which he said he wanted for making a tree house for his son.

He took me back to the Temple, and the next time I saw him was at a concert he gave in Berkeley.

Sheena had further dealings with him in NYC after we broke up. That is the actual story, as I recall it, just to set things straight.
Hare Krishna.
Pavanadeva

Basu Ghosh dasa recalls: “I was at ISKCON Chicago, during July 1973 when the van with Pavanadeva, Sheena and Dylan pulled up and they got out. I was sending out parcels of Spiritual Sky incense via UPS, which was my service in those days, and I immediately recognized Dylan. Dylan was ushered into a meeting with the late Sudama Maharaja, who was visiting ISKCON Chicago. At the time the temple was located in Evanston, in the old African-American YMCA building that was the Chicago temple back then. Dylan spent 3 hours or so conversing with him. It was a thrill at the time to see Dylan in person and up close. I was just eighteen years old at the time.”

OK, here is what I remember. It was around 1972-3 and I was living in LA in one of the temple apts. Sheena was my old friend; we had actually met in camp when we were teenagers, and then we re-met as devotees. When Sheena arrived in LA, I offered her a place to stay in my apt. The day after their big arrival in LA, Sheena was out and I heard a knock on the door. It was Pavanadeva accompanied by Bob Dylan, his wife Sara and their son.

They were looking for Sheena and I invited them in thinking she’d be returning soon. They all came in and sat down. By the will of Krishna and the blessings of Shrila Prabhupada, I had made some cookie prasadam that morning—so I had some nice prasadam to offer them.

I had a guitar in my apt. Dylan played a song that I understood he had written on their travels along the way called “Come to Krishna.” There were a few verses with a chorus after each verse. The first verse was something like,

Please note that the song went something like this as I do not remember the exact words. So Bob Dylan sang something like that on my guitar. I also had a portable electric organ. Then Dylan played that and we all went around in a circle chanting Hare Krishna to Shrila Prabhupada’s melody.

We each took turns chanting it. Dylan looked his usual scruffy self and Sara looked very neat and tidy, every hair in place, perfect makeup—so there was quite a contrast in their appearance. Later someone told me they saw Dylan out on my balcony and he was wearing his top hat.

When word got out that Dylan was there in my apartment, some devotees brought him to see the temple and to have darshan of Shri Shri Rukmini-Dwarakadhisha. He may also have been shown some of the art department (but I didn’t go along so I don’t know for sure). Later that evening, someone found some jewels in the temple lying on the floor somewhere. We wondered if it was Dylan who left them. Pavana called Dylan and asked him if he had left the jewels, and Dylan answered, “Well maybe I did and maybe I didn’t.”

That is what I remember. I’ve told the story innumerable times over the years, as it was always so exciting and amazing to me that Bob Dylan, my hero for many years, had come to my apt. and actually chanted Hare Krishna, took prasadam and danced to Shrila Prabhupada’s favorite sankirtana tune.

It is reported that on another occasion a devotee who was distributing literature at a Midwest mall was surprised to find Dylan sitting in a van in the parking lot. Dylan invited the devotee in and again performed a Krishna song to that audience of one.

Tom Petty of the Wilburys would openly acknowledge that George was very open about Krishna—something he showed more by his example than direct preaching. He inducted Goorge Harrison into the Rock and Roll Hall of Fame by getting the audience to chant Hare Krishna. Therefore, Dylan by the Supreme will of Krishna had the benefit of sadhu sanga from his many encounters and work with George spanning decades.

In a room conversation in Vrindavana in 1974 Shrila Prabhupada declared, “All the musicians, they’re attracted to me. Big, big musicians. Another is … Bob Dylan. He is as good as, or more than (this was an apparent reference to the Beatles) … He has asked one of my students, ‘Ask Prabhupada, what can I do for him.’ He is reading my books.”