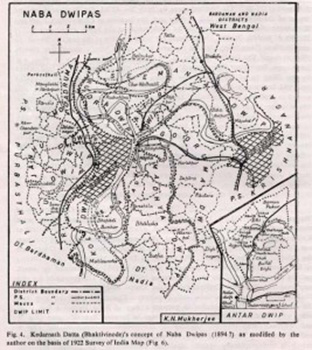 We should try to become more acquainted with the realistic view of Navadvipa. There are so many divisions in this Navadvipa Dhama: mainly nine. It is mentioned that they represent the nine sections of devotion:

Simantadvipa represents sravana-bhakti, hearing about Krishna. Chanting about Krishna, kirtana, is in Godrumadvipa; remembering the Lord, smaranam, is in Madhyadvipa; serving the Lord’s feet, pada-sevanam, is here in Koladvipa; worshiping with the ghee lamp, etc., arcanam is in Rtudvipa; offering prayers, vandanam, is in Jahnudvipa; rendering service to the Lord in the relationship of a best friend, sakhyam, is in Rudradvipa; and full self-surrender, atma-nivedanam, is represented in Sri Antardvipa, Mayapur. They have connection with these nine main types of devotional conceptions respectively. When traveling to these places we are reminded by the incidents connected with them how such representation comes from each place. All of them taken together promote our understanding as to what is devotion proper.

The life of a devotee has no individual or provincial interest. He works only for the universal interest of the whole Absolute. Devotees are soldiers of that plane. Whatever they may do, the suggestion and inspiration comes from the center, the Absolute good. Though apparently they seem to be members of this plane of quarrel, in their heart their connection is with the Absolute; therefore their color has completely changed. The valuation of the devotees movements has completely changed although apparently they seem to be doing everything almost in a similar way to the mundane persons. Mundane persons eat, and the devotees also appear to eat, but actually they are not eating: they are rendering service to the remnants sent by the Lord. In this way they are going on.

One of my learned professor Godbrothers was challenged by his younger brother who was perhaps a graduate,”What do you do there in the matha? What we do, you also do there.”

Such will be the difference between all the activities of the true Vaisnavas and the worldly men. Apparently the Vaisnavas seem to do the same things as others are doing: walking, sleeping, eating, engaging others in activities, earning money, spending, and so many apparently similar things; but the standpoint is totally different. It is connected with the center. They abide by the direction of the central movement whereas the worldly men are guided by their provincial, local, and the other by the Absolute, and that difference is very, very great. The Vaisnavas are on the other side of selflessness, the other side of renounced life. Between the worldly men and the Vaisnava is the realm of complete renunciation. One is on one side, the other is on the other side.

There are so many incidents, stories, and sceneries connected with Sri Navadvipa Dhama parikrama, but all are meaning to help us in our life of absolute adjustment. If one can catch that, then by his parikrama through different holy places and his hearing about local “historical” incidents he will receive eternal instructions in various conceptions of devotion. He will receive encouragement in this way.

It is not like the parikrama of the ordinary people in the general Hindu section of society who also go out on pilgrimage. The general people come in contact with the holy places and they have some holy association, but their main object is to gain some unseen help in their present life. They want their desires of this present life to be satisfied by some invisible help from the demigods. It is punya-karma—to acquire good merit to help success in their present life according to their conception. It is not suddha-bhakti.

The objective of the Gaudiya Matha people is quite different and it cannot be reckoned in any of the different planes the present educational section are hunting for. The present-day scholars cannot even think that purely spiritual life is possible at all. They consider that spiritual life may be only a concoction that others are suffering from. According to the so-called scientific scholars, the spiritual searchers are fighting with their shadow, hunting after impossibility and imaginary things. They consider the devotees to be running after phantasmagoria and superstition.

But on the other side, we think that in the name of concrete reality they are running after phantasmagoria—just the opposite. They are running after the mortal achievements. They think immortality is not possible, and Socrates had to pay a heavy price for expressing that the soul is immortal. At the cost of his life he announced that the soul is immortal. They objected, “No, nothing is immortal, therefore it is foolish to neglect the mortal pleasures, so let us enjoy whatever there may be.” That was their viewpoint.

The normal viewpoint is that we want to be wakeful in that plane of life which is darkness to them. The basis is that the soul is immortal and there is an immortal world. It is not only immortal but it is nectarean reality, srnvantu visve amrtasya putrah: “O you sons of nectar, be mindful. You are eternal and you have become victims of mortality but really you are not so. You have an inconceivably higher prospect of life. Come back. Come back to your own plane. Come back home.” That is the general call of the Upanishads, the most ancient revealed scripture.