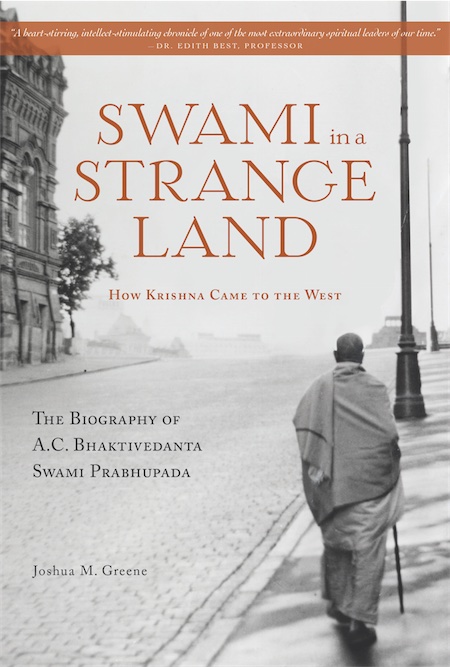 A new biography of ISKCON Founder-Acharya Srila Prabhupada, entitled “Swami in a Strange Land: How Krishna Came to the West” is set to be released on May 3rd 2016, during ISKCON’s 50th anniversary year.

While there is already an exhaustive biography of Prabhupada in the form of Satsvarupa Das Goswami’s multi-volume Srila Prabhupada Lilamrita, as well as many individual memoirs, author Yogesvara Das (Joshua M. Greene) felt the need for a single volume bio that would be accessible and marketed to a broad general audience.

“I teach religious studies at the undergraduate level,” he says. “And whenever students asked me, ‘Do you have something about your spiritual master that I can read?’ I was feeling bereft that there wasn’t a single simple volume that would not only convey Srila Prabhupada’s life story in a succinct way for general readership, but also the essence of his teachings.”

Yogesvara – who asked for and gained the endorsements of many senior Prabhupada disciples for his effort – knows how to reach a broad audience. He’s had books published by Random House, Simon and Schuster, and other major companies, including successful biographies like Justice at Dachau: The Trials of An American Prosecutor and Here Comes the Sun: The Spiritual and Musical Journey of George Harrison.

His biography of Srila Prabhupada describes how Prabhupada grew up in a British India where deity worship, and worship of Krishna in particular, was put down by missionaries, yet his father Gour Mohan De was determined to see young Abhay grow up to be a strong devotee and preacher.

The book addresses the sacrifices Prabhupada made to fulfill his spiritual master’s order, the extent of his poverty, and the depth of his determination to write, print books and magazines, and secure all the papers needed to go West.

“Sumati Morarjee, who helped finance the printing of his Bhagavatam, had met “Swamiji” at Kurukshetra,” Yogesvara says. “She remembered him as a holy person then and was pleased to help with funds for printing. But she hesitated over giving him a ticket to America. She feared for his health—and we know that she had good reason, given the two heart attacks he suffered on the journey to America. But he convinced her, and just before embarking he traveled to Mayapur to offer obeisances at his spiritual master’s samadhi.”

Once in America, Prabhupada’s sacrifices continued through one of the coldest winters on record.

The story of “Swami in a Strange Land” culminates with the New York State Supreme Court case against his movement, charging that Krishna consciousness constituted brainwashing.

“The legitimacy of his whole mission was in question,” Yogesvara says. “But that case came out successful, just months before he passed away.”

Yogesvara’s aim is to tell a full biography of Srila Prabhupada, from the beginning of his life to the end, yet told from the perspective of his teachings.

“I asked myself, what would Prabhupada say if I told him I wanted to write his life story,” he explains. “And the answer was obvious: he would say, ‘My life story only has meaning if it can convey Krishna’s teachings.’”

Thus, Yogesvara’s five main goals in writing Swami in a Strange Land were that readers should come away thinking 1) “I’m not this body,” 2) “God is a person,” 3) “Now I understand what a real guru is,” 4) This person came here for me,” and 5) “I would like to read some of Prabhupada’s books.”

Yogesvara did three years of extensive research for Swami in a Strange Land. He read some 100 academic and popular books, including memoirs, studies of ISKCON, and biographies. He read every one of Srila Prabhupada’s 5,000 letters, and almost all of the 38 volumes of his transcribed conversations. And he conducted more than fifty interviews with personalities like Prabhupada’s now departed disciple Brahmananda Das, Professor Tom Hopkins – who was generous with his memories of 26 2nd Avenue – and Prabhupada’s son Vrindavan Chandra.

“Vrindavan Chandra kindly provided a description of being with his father when he walked up the gangplank to board the Jaladuta,” says Yogesvara. “One thing that reporters, editors and more have consistently told me is that they’re so impressed with Srila Prabhupada, but cannot understand why he left his family. So I deal with that in the book, and I’m so grateful to Vrindavan Chandra for helping me with it.”

Yogesvara’s book isn’t a detached, dry biography, but a dramatic narrative, full of evocative descriptions that bring the reader to a specific time and place, and dialog as Prabhupada interacts with disciples and others he meets. The best thing about the dialog? None of it is invented – it’s all lifted from transcripts and recorded conversations, with immaculate references at the end of the book.

Yogesvara also tells us about Prabhupada and his life through the viewpoint of his disciples.

“That’s the most valuable lens that we have,” he says. “Without understanding how people were affected by him, it’s difficult to convey a sense of what it was like to be with him.”

Swami in a Strange Land often uses the experiences of disciples to gain a deeper appreciation of elements of Prabhupada’s life or achievements that people are already familiar with.

“For example, when Prabhupada wrote Easy Journey to Other Planets in 1959, that was his first book,” Yogesvara says. “It came out first as an essay in two issues of Back to Godhead magazine. It was an absolutely brilliant transposing of Vedic wisdom into a contemporary scientific language. And it was that book that made Sadaputa [Prabhupada’s formost scientist disciple] a devotee. That’s how powerful Easy Journey was.”

Yogesvara himself, who joined ISKCON as a student in London in 1969, is also one of the book’s “lenses” through which we see Prabhupada.

“I had the privilege of traveling with Srila Prabhupada – not as much as his secretaries or personal servants – but the few weeks I did have were revelatory,” he says, explaining that these revelations are in the book.

“I got to ask him anything I wanted, and we had very long discussions about art, preaching Krishna consciousness, family life, and his personal life. Whenever I was with him, I would ask him any question that came to my mind. And he never declined to answer.”

At 304 pages and hardcover, Swami in a Strange Land includes 30 color and 30 black and white photos, each one of which is referenced to some incident in the text, giving readers unfamiliar with Krishna consciousness deeper insight.

It’s being published by Mandala, who are set to go all out in promoting the book to a broad audience – during ISKCON’s 50th anniversary, the perfect time to raise awareness of Srila Prabhupada.

“They’re hiring a publicist, so there’ll be author tours, interviews, feature articles, drive time radio, morning talk shows – they’re going for every venue they can,” says Yogesvara. “Also, starting next year their catalog will be distributed by the Simon Schuster sales force, one of the biggest book sales forces in the world – so Swami in a Strange Land will be listed in the Simon and Schuster catalog too.”

In an effort to further maximize the appeal of Prabhupada’s story to a large audience, a show, tentatively titled “Krishna and the Spirit of the Sixties,” will premier in New York in October 2016 and then be made available to ISKCON temples everywhere for their 50th anniversary events.

It will feature a live narration of Prabhupada’s life and teachings accompanied by Powerpoint, video, and live music by a band led by Godfrey Townsend, who has performed with some of the biggest rock artists in the world.

“The idea is that Prabhupada was a central personality in that dynamic time in American history, and that the “Spirit of the Sixties” is not over,” says Yogesvara. “It was a spirit of self-searching, of finding a greater truth to life. And that spirit is still alive in Prabhupada’s society 50 years later, through the junctures of Krishna consciousness and many areas of human endeavor: healthcare through initiatives such as Bhaktivedanta Hospital, environment (Eco-Village), conflict resolution (ISKCON Resolve) and the frontiers of consciousness and science (the Bhaktivedanta Institute and the Mayapur project).”

So what does Yogesvara ultimately want readers to take away from Swami in a Strange Land and its accompanying shows?

“That beneath the surface appearance of reality, there is a transcendental dimension of consciousness at work within creation,” he says. “And that solutions to the issues confronting humanity can only be long term and lasting if the issue of consciousness is addressed.”

“That was Prabhupada’s great contribution,” Yogesvara concludes. “He demonstrated, gave proof, that life does not come from matter. Life come from life. And it does not end with the body. It is eternal. That one fact can transform the landscape of the world.”

Swami in a Strange Land can be pre-ordered here: