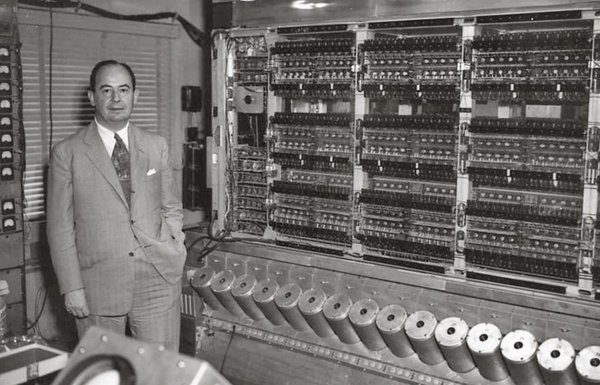 Alan Turing, who is accredited for conceiving the idea of computers, and indeed for building the early models in the 1940s in Bletchley Park in the U.K., was so forward thinking that he could foresee the day when computers would practically administrate the world. He even thought that computers would think for themselves. His reasoning was that it did not matter what the external looked like, but if the results of intelligence were equal or better than man, the computer should be given credit as much as man as a thinker. He contrived of a test were a judge would listen to the reasoning and intelligence of both a computer and different men behind a screen, and if the judge was fooled into thinking that all were living persons, then the computer would be counted as an intelligent thinking “person”.

If we were, however, to ask a computer how it felt, what mood does it find itself in today: Is it feeling ambitions to succeed in its tasks? Does it want to improve its lot? Indeed, is it feeling disappointment and depression, or does it ever wonder why it exists in the first place, or contemplate what stages took place to bring it to its current condition, or any number of similar questions?… I don’t think there will come a day when “IT” will be able to give a conscious living response.

The scientists building such machines now and into the future, however clever they may be, are missing the point that the living being is ananda moya bhasat, pleasure seeking by nature — something a machine will never feel or be.

The jiva feels pleasure and pain in his conditioned state, and in his fully realised state feels and experiences with transcendental senses the ever increasing bliss of his eternal rasa with Sri Krishna, who is Rasraja. The Supreme Personality of Godhead is the one and only Personality who enjoys unlimited exchanges of love with His unlimited parts and parcels.

Ironically, the scientists must first come to understand that although they are so enamoured with these computer machines and try to attribute life to them, and although they are presently thinking, they are a machine made of gross matter and subtle elements. They are indeed not a machine, but inside of one. Their consciousness is simply passing through the machine, and they are “programmed” by some higher force to identify with this artificial virtual life. Until such time as this occurs to them, by accepting the descending process of knowledge they will remain sympathetic and will relate to the machines all around them, and compare themselves with them. For according to them, they evolved and are still evolving, much like their computer technology.

Perhaps their ambitions will be to create their own godlike, super computers to control and regulate the lives of all, that watches over all, provides enjoyment to all, and that will pass judgment on what’s good and bad. All will have to surrender to the will of this super machine, which will be all knowing and all seeing.

Illusioned persons try to find pleasure through these machines, stretching their minds and stretching their intelligence for newer and newer experiences, while within themselves always remaining in anxiety and feeling the onslaughtsof the three-fold miseries. If computers are used in service to the Lord and to assist us in our bhajan, that’s all very well, however even then one can become too dependent, and spend endless hours in things that can waste our time and take us away from our hearing and chanting.

Problems in the world individually and collectively are such that these machines are programmed and used by fools and rascals, who take society to ever greater illusion, cheating, depravation and exploitation. Newer degrees of suffering are inflicted on all in a desperate search to satisfy the mind, intelligence and senses in a bid to become false enjoyers. One can look at the examples of the dark web, or super-fast micro-second stock trading, extreme groups plotting murder and mayhem, what to speak of the world of porn. Srila Prabhupada writes in the 1st canto of the Srimad Bhagavatam how our children are subjected to the slaughterhouse of the education system, but this slaughterhouse is now viral and everyone of us is exposed to it.

We may look at it like this — people are suffering in this real but temporary world but the solution is not to enter into the virtual worlds they are creating in a bid for satisfaction, but try to enter the spiritual worlds. Hrisikesa Hrisikena sevana bhakti rucita, all senses will be satisfied unlimitedly when engaged in service to the Master of the Senses. No amount of advancement of technology in any field will deliver the jiva to his transcendental spiritual body, which is full of highly evolved spiritual emotions in loving relation to Sri Krishna and His devotees. That position is the natural state of every jiva, and it is bestowed upon them by the Hladini energy of Sri Krishna, once a humbled service consciousness is brought about by service to the pure devotees.