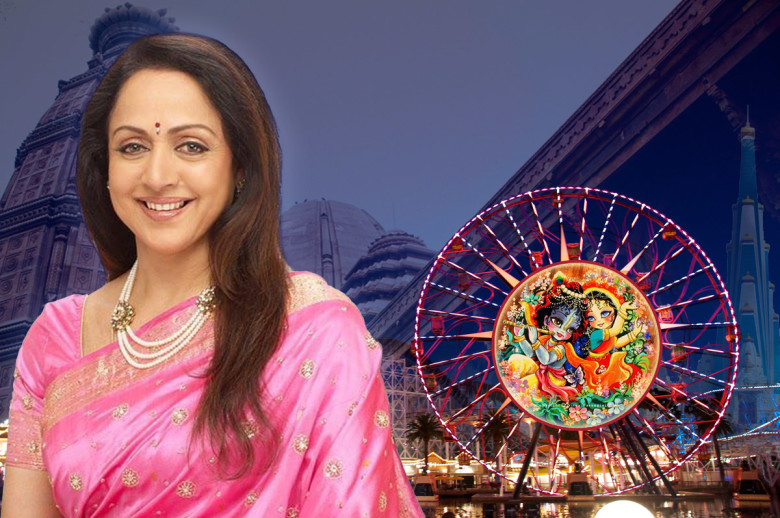 Bollywood star and BJP MP Hema Malini will develop a Krishna theme park in Mathura and UP chief minister Akhikesh Yadav has pledged that he will allot 50 acres of land. Hema Malini, who met Akhilesh here on Saturday to discuss the project, told TOI the park will be called the Krishna Leela Udyan.

“It will have an investment of Rs 200 crore and technical know-how will be provided by the makers of Disneyland. The chief minister has been supportive and has promised to provide land,” she said.

The theme park will present the life and times of Lord Krishna. She presented a detailed project report to the chief minister, who along with state chief secretary Alok Ranjan, discussed the project. The park will also have rides, including mini trains, food courts and bazars.

She remarked, “Millions of people are coming to Braj already, but we want to make it more attractive for pilgrims and tourists. At the midday, the temples close and people have nothing to do or anywhere to go for amusement. So this will fill that need.”

Moreover, an important part of the project includes an outdoor amphitheater for cultural programmes, bringing this presentation of Braj culture to an international audience. This would be modeled on the Mukta Kashiya Rangamanch in Mathura.

Apart from the Krishna theme park, Hema Malini spoke of plans for developing Rawal village, which she has adopted for special consideration. The village lies on the Mathura-Sadabad Road in the general area of Gokul in her constituency Mathura and is said to be Radharani’s birthplace.

A special garden called Radha Bagicha will be developed at the place Radha is believed to have appeared on a lotus.”The park and the garden will draw attention of the nation and people around the world and help spread the message of Krishna,” she said.

The roads leading to the Rawal will be upgraded and new roads built connecting the area’s villages. Six different departments are involved in the planning and both State and Union moneys will be allocated for the project.