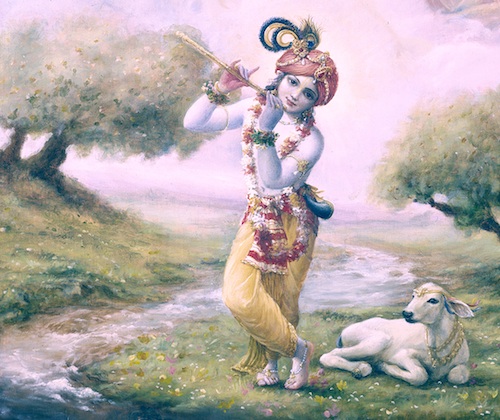 Ekadasi is considered to be the favorite day of Krsna, when devotees refrain from material activities. Ekadasi is aprakrta. Aprakrta means which is like prakrta but is supramundane. We are warned that Ekadasi is not mundane, though it seems to be. Because it is influenced by the moon, Ekadasi seems to be mundane. The heat of the world, and the watery portion in the body increases due to the influence of the moon just as the high tide and low tide of the ocean are also effected by the moon. As we approach the full moon and the new moon, the watery portion of our bodies is enhanced by the movement of the earth, the moon and the sun, and thereby the enjoying spirit is also developed.

So, fasting is necessary to meet with that external movement of nature. Fasting can save us from that peculiar reaction. Fasting has been recommended, and especially, if one can’t fast at all, then one may take some process of diet that will give less cause for excitement, therefore one may take anukalpa (non-grains). We fast to check the senses, because the senses by the natural flow become more intense at that time. The result is, that one will be excited and want to enjoy – to encroach on the environment. So this unfair encroachment of one’s own self is to be controlled, therefore this fasting has been recommended – this is one way.

We take some types of food, and not others, because they are considered to be less injurious, and less exciting to the body. Also it is mentioned in Hari-bhakti-vilasa, that some particular sins are fond of taking shelter in those foods that we reject. Papa means a type of sin that is very fond of taking shelter in grains and those places which we surely want to avoid. First-class fasting means without even taking water (nirjal). Those who cannot do without food, may take fruit, roots, and milk.

Also, from the spiritual perspective, Krsna Himself also feels more necessity for enjoyment, and when Krsna feels more necessity, the devotees have a greater chance to offer service. The time is more valuable for them, because Krsna wants to enjoy, and at that time, devotees should be busy to supply the things for His enjoyment—so much so that they won’t have any time for their own necessities. So, the first reason is to please Krsna and the secondary reason is, that by fasting, we can make our body dry and so our enjoying spirit will be lessened. This is the general explanation. There are so many other things also. Everything is conscious, everything is personal, and Ekadasi has her own personal character, and she devotes herself with all her company in the service of Krsna.

She does not take any food or anything else, and also does not allow others in her group to take food or waste time, but is always engaged in the service of Krsna. We are told that Ekadasi and Dvadasi are favored by Hari—the underlying cause is already explained. Hari will be pleased with any small service performed on these days. So, Dvadasi and Ekadasi are both considered the favorite days of Krsna. Ekadasi observance is compulsory—though Dvadasi is also honored as the favorite of Hari, still Ekadasi has preference. Dvadasi has preference over Ekadasi only in eight cases, determined by the combination of naksatra, tithi, etc., when we observe Maha-Dvadasi and not Ekadasi.

On Ekadasi and Dvadasi, even a little service gives some greater remuneration. Remuneration means that our serving attitude and our earnestness will be enhanced at that particular time. In deeper sense, this means that Hari at that time wants to accept more service. That is the fortune of the servitors, that Hari demands more of the servitors, so the importance for the servitors increases at that time during Ekadasi and Dvadasi. Also on Dvadasi, we do not pick the leaves of tulasi because it is considered that Tulasi-devi has observed fasting on Ekadasi.

It is also noted that service is the first consideration. If I fast and do not take any water, then I may have to lie down and not be able to do any service to the Lord. That is not desirable. So, to take anukalpa and do service to the Lord is better.

Service is better than sitting idly. So, if prasada-seva is taken as service, this is best. But at the same time, the individual position of a devotee should be considered. The Sahajiyas do not observe Ekadasi fasting at all. They say, “Oh, we are in Vrndavana—no fasting here!” But Srila Prabhupada did not like this—the Sahajiya, in the name of krsna-bhakti, goes on feeding the senses. But when necessary for the service of Krsna, to keep up the body, we take prasadam—we don’t like that by fasting the loss of energy may occur. In this way we honor Ekadasi. If fasting does not hamper our service, we may go on fasting.

Once on Janmastami day, Hayagriva Brahmachari (the later Madhava Maharaja) had to arrange for Prabhupada to go to Mathura, in order to observe the Purusottam-masa. Hayagriva was sent one day earlier to hire a suitable house and that day happened to be Janmastami. Prabhupada asked his own cook to feed Hayagriva rice on Janmastami day. “He will have to take a tedious journey and his energy will be wasted—he has an important duty to arrange that house there.” That was his order. But Hayagriva hesitated and the cook also hesitated. Anyhow, he did not take rice on Janmastami—instead he took sabhu (tapioca), plantain and curd.

However, if Professor Sanyal had been in such a position, he would have certainly taken rice – he was so much adherent and extremely submissive to Prabhupada’s order. He would have said, “Oh Prabhupada has asked me to take rice—I must take rice!” That was his line of thought. But Hayagriva hesitated, “No, no, it is not necessary, I am strong enough. I can do my duty.” Also, when Prabhupada wanted to eat something on fasting days, he would take anukalpa.

My Guru Maharaja felt that you will get the maximum energy if you take good food and you do good service. That was his maxim. Krsna is not a liquidated party. Take full prasadam and do full service. Whatever is necessary, take it for the cause of Krsna—not for your own cause. You are Krsna’s, so if you grow weak and your service is hampered, then you will be the loser. “Better that my soldiers are well fed and working well.” That was my Guru Maharaja’s principle.