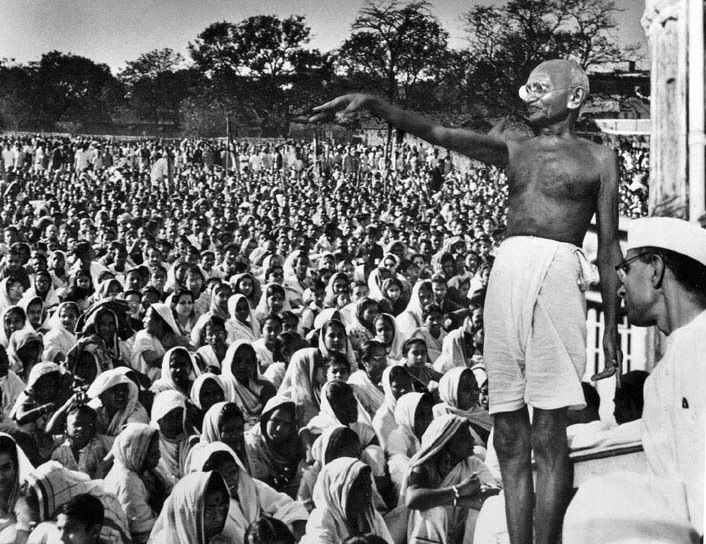 As the World is embracing Indian Thought more and more, India seems to be abandoning it.
Perhaps the greatest challenge for India today is that its independence movement was only half-accomplished. While India is politically independent, intellectually it still is labouring under the shadow of outside influences that keep the country and its people divided. The resulting lack of national vision, national unity, or of a strong national will makes it difficult to go forward with any major project, whether it is cleaning the Ganga or economic development overall.

India gained its political independence in 1947. It was based upon an older spiritual, intellectual and cultural revival that started in the nineteenth century, in which many profound thinkers proclaimed the relevance of India’s dharmic traditions. This reawakening of India was highlighted by Swami Vivekananda and his extraordinary success in bringing yoga and Vedanta to the world.

India’s independence movement was marked by a continuation of this spiritual and cultural renaissance, including not only Mahatma Gandhi and Rabindranath Tagore, but also Sri Aurobindo, Ramana Maharshi, Rama Tirtha and Anandamayi Ma. The framers of India’s Constitution were strongly influenced by such visionaries.

Unfortunately, after independence these great thinkers and the national awakening they created ceased to be the role models for the country. A new generation of intellectuals came up who were more comfortable with Western cultural models, particularly of the Marxist left. They had only a token respect for India’s older traditions. Their goal seemed to be to de-Indianise India and make it more like the countries of Europe or the Soviet block.

This means that the intellectual leaders who took power in India during the decades after independence had a very different view of India than those who gained the independence of the country in the first place.

This new intellectual class may have criticised European colonialism but was firmly entrenched in a Western sociopolitical view of the world. Some questioned whether India ever had a real national culture of its own and instead worked to promote regional and social divisions. They seldom promoted the idea of the greatness of India of the earlier independence movement.

Certainly the West has a lot to offer India, particularly in terms of science and economic development. Yet this group of Westernised intellectuals did not emphasise such positive aspects of Western culture, but rather political views that proved failures in the West, like state socialism.

Meanwhile India’s dharmic renaissance continued to grow worldwide after 1950 with the expansion globally of yoga, Vedanta and Buddhism. This included new trends in healing, ecology, and psychology, and an effort to link science and consciousness, which all found India’s dharmic traditions to be an inspiration. As the world was embracing Indian thought more and more, India seemed to be abandoning it.

A new renaissance for India

Today it is crucial that India expands its independence movement once more in the spiritual, intellectual, economic and cultural fields. There needs to be a new sense of national unity and global relevance.

A new vibrant India, which commands respect from the entire world, can only be built on the older dharmic foundation of Indian culture. This dharmic foundation is open-minded, compassionate and pluralistic, and cultivates a universal view that can solve many of the world’s pressing problems. But it also requires creativity and insight in its adaptation to the very different circumstances of human life today, including developing technology in a sustainable manner. Yoga and ayurveda can help show us the way.

For this national renaissance to succeed, it is essential to bring high ethical standards back into the national way of life by a new movement of national service and Karma Yoga.

The foundation of modern India in dharmic thought and Karma Yoga remains the way forward and can offer an inspiration to the entire world, but it must be taken up in earnest. This is the challenge for the youth today – to create a new India for the 21st century with an enduring dharmic vision.