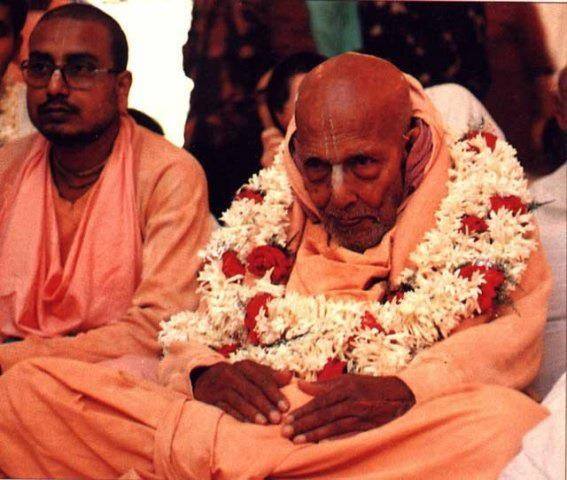 My Spiritual Master, His Divine Grace Srila Bhakti Pramode Puri Goswami Maharaj showed us many examples teaching us how to serve ‘Guru’, even when he was physically unfit to render the services of his Gurudeva, His Divine Grace Srila Bhakti Siddhanta Saraswati Goswami Thakur Prabhupada (Srila Prabhupada). Once Srila Gurudeva’ s hand was shaking due to his advanced age (96-years old). Still, he wanted to continue his services, editing Gaudiya publications, a service he was given after taking initiation from his Gurudeva, Srila Prabhupada. Due to his shaking problem, he was unable to understand his own handwriting. Once, I requested him to dictate what to write to me, then to check my writing later; but immediately he said, “This seva to write for Gaudiya publication is given by my Gurudeva, Srila Prabhupada. If he was not telling me to dictate, then how can I give you the dictation! If I am unable to understand my handwriting, then it is better for me to stop my writings.” After such an expression, his eyes were full of tear and out of separation, again he expressed with a soft voice, “ Oh! Gurudeva, Srila Prabhupada, now I am unable to do any seva for your mission; what is the use to be here with this useless body; please allow me to leave from here.”

I remember one more incident, it was 1993, and we used to stay at the Sri Chaitanya Gaudiya Math in Kolkata. Srila Gurudeva was 95-years old; I was his personal servant. At that time Srila Gurudeva was the editor of their monthly magazine publication, ‘Sri Chaitanya Vani’; it was the dateline for publishing of the magazine. In order to publish the magazine on time he was kept himself busy the whole night in order to edit the contents of the entire magazine. In order to prepare his bed I waited for him; but due to my laziness I slept on the floor in his room, then the sound of a bell for Mangal Arati woke me up, and I saw that he was still busy with the editing. I asked Srila Gurudeva, “when are you going to sleep”; then he replied, “let me finish this small part, it will take a few more minutes”. Then I told him it was time for Mangal Arati. Immediately, Srila Gurudeva said, “Oh! Now I have to chant my rounds; tonight there is no time for sleeping.” After that conversation, he got out his chanting beads and started to chant as usual t in the early morning.