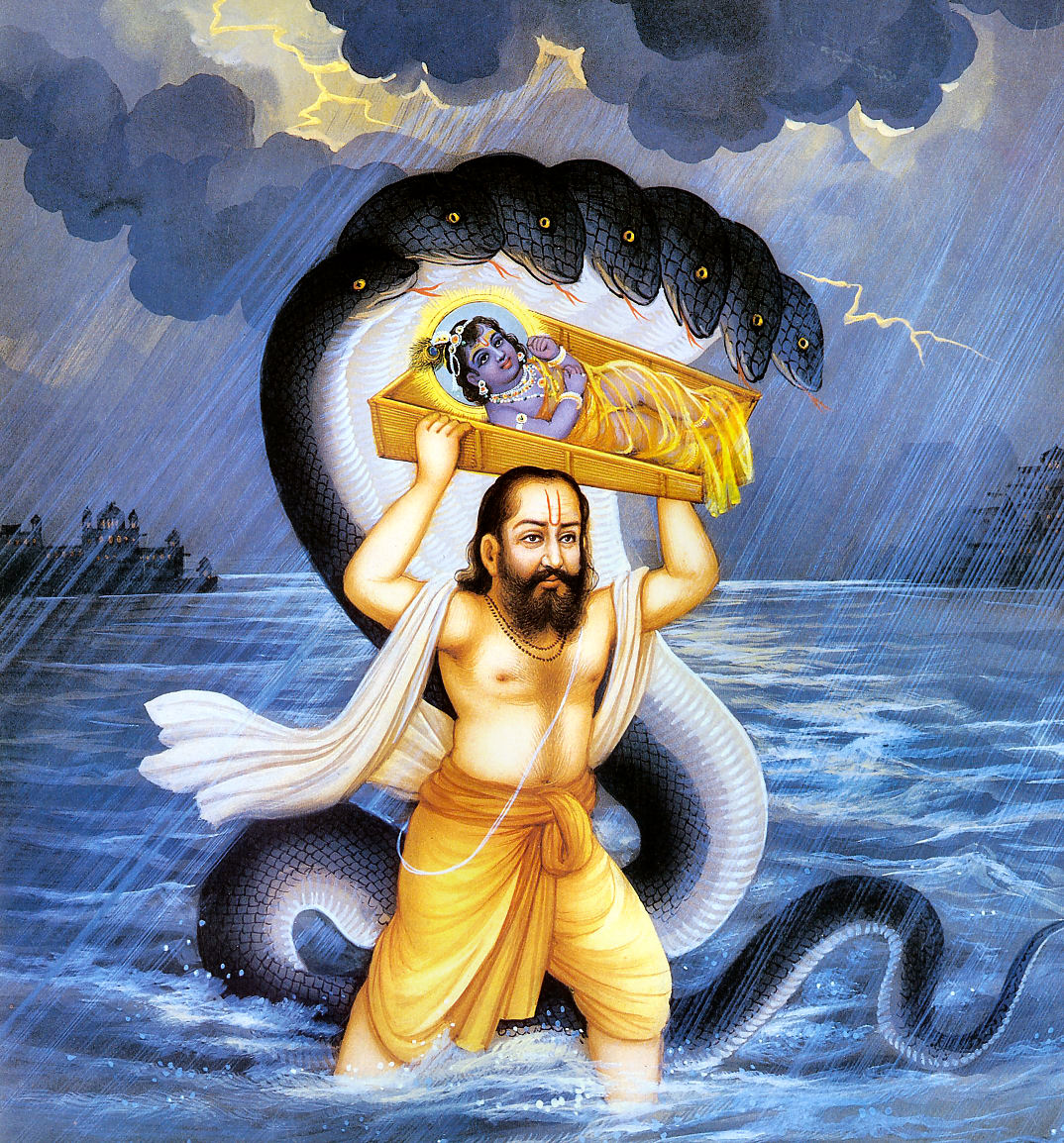 In Vraja-vilasa-stava the following description is found: “I offer my obeisances to Mahavana, where Vrajaraja Nanda celebrated the birth of Krishna by distributing eighteen lakha cows, each wearing a large pearl necklace and golden ornaments. He also gave the brahmanas a tremendous quantity of jewelry and grains.”

In the first song of Nandottsava in the Stava-mala, Gitavali, it is written; “Yashoda gave birth to a beautiful son, so the gopas were overwhelmed with joy. Some cowherd men presented gifts, others danced continuously, while others sang sweet songs. Some of them distributed yogurt and butter, some satisfied the desires of others and some simply took darshana of Krishna’s eternal transcendental form.”

In another song from the same Gitavali, it is said: “The brahmanas have been fully satisfied by gifts of cows. O Vrajeshvara, please quickly satisfy the singers. O Nandaraja, you have got a beautiful son, so please satisfy the requests of the cowherds with suitable gifts for your celebration. My heart is filled with joy seeing the face of your son and it desires something which no one else has got. Let me be absorbed in your son who is like a sporting black swan in the reservoir of Shri Sanatana’s mind.”

Shri Raghava continued his description of the holy places. “It was here that Nanda performed all the rituals to celebrate the birth of Krishna. In a goshala, Nanda divulged his mind to Gargacarya and admitted his fear of Kamsa. Garga performed the name giving ceremony of Rama and Krishna very secretly in a goshala.

Vrajendra-kumara Krishna killed Putana and the cremation was done here. Krishna once broke a chariot here while lying on the ground.

In Padyavali there is the following description of Krishna’s childhood: “See the glory of that baby, Shri Krishna, who has bright red palms and feet and is decorated with beautiful gorocana tilaka. While lying on His back, He broke the chariot.”

Here Krishna used to lie in His mother’s lap to suck her breast milk. Being overwhelmed by the beauty of her son’s face, Yashoda happily fed Him. Again from Padyavali: “Lying in His mother’s lap with half-closed eyes, Krishna is sucking one breast and caressing the other which is also filled with milk. His mother also caresses Him with her fingers. Krishna smiles continually showing His bright teeth which are whitened by the milk. May all of these teeth protect you.”

Raghava pointed out the place where Krishna used to give pleasure to Yashoda by crawling. This is described in the following verses from Padyavali. “Attentive to the worries of Vrajeshvari, Krishna, with restless eyes, would crawl across the ground showing His sweet lips in a nectarean smile. His glittering complexion was like a dark tamala leaf. I pray to this boy.”

When the gopis would ask Krishna to find His eyes, ears, nose, face, and tuft of hair, the Lord would point with His little finger and give them great pleasure. It was here that Krishna would smear dust on His body. Mother Yashoda would then admonish Him, “I have just bathed and perfumed You, and You have immediately covered Yourself with dust!”

It was here that beautiful Krishna used to turn to His mother for milk. Once Trinavarta carried Krishna high in the sky where Krishna enjoyed the view. Then He killed Trinavarta here within Kamsa’s kingdom. Krishna once ate earth and showed Vrajeshvari the whole brahmanda within His mouth. Therefore this place is called Brahmanda-ghata. It was here that Yashoda and the other gopis enjoyed the beauty of her son as they sat in the compound of the house.

The following descriptions are also taken from Padyavali: “When Nanda-nandana was five years old, He was very restless as He played in the compound of Nanda. His eyes were covered by tufts of curly hair, and He was decorated with bangles, nupura [ankle bells], and necklaces.

The gopis would try to stop His crying by kissing His lips, pressing their necks on His, looking into His beautiful eyes, touching their foreheads to His, and then eagerly holding Him to their breasts for a long time. May that Lord Krishna, who in this situation was absorbed in the mood of Cupid, His body motionless, covered with goosebumps, and decorated with a gentle smile, be our protector.

Vanamali Krishna used to give pleasure to the newly wedded gopis while playing on His father’s lap. When Yashoda asked Him, “How much fresh butter have You taken today?” Krishna held the breast of Dhanishtha while saying, “This much!” May that Krishna be our protector.

“Hey cauri [thief]! Where are you going? We can easily see what an ecstatic mood you are in. You are trying to take away My ball by hiding it in your blouse. Come on, give it back!” Saying this He would forcefully massage the breasts of the newly married gopi girls. That Lord Keshava, whose body looks very charming decorated with His hairs standing on end, is conquering Gokula in this way.

I sing the glories of Lord Krishna’s childhood pastimes. While crawling toward a vessel full of cream, He continually turned His face looking here and there, fearful of being caught by His mother.

During His sleep Krishna used to call the demigods which made Yashoda very anxious. “O Shiva, welcome! Please sit down here. O Brahma, please sit on My left side. O Kartikeya, are you well? O Indra, are you happy? Where have you been Kuvera? I have not seen you here.” When mother Yashoda heard her child speaking like this in His sleep she said, “My dear child, why are You saying all these unearthly things?” Then to free Him from evil spirits, she put saliva on the child.

It was here that Yashoda used to tell the story of Rama to Krishna while she put Him to sleep. Yashoda said, “There was a king named Rama.” “Yes,” said Krishna eagerly. “The name of His wife was Sita,” Mother Yashoda continued. “When He went to the forest of Panchvati on His father’s order, Ravana kidnapped His wife.”

Hearing the stories of His previous pastimes, Krishna became restless and said, “O Lakshmana, where are My bow and arrows?” May these excited words of Krishna protect you.

When Krishna was still awake, mother Yashoda said, “The evening is coming to an end now dear. Why are You not sleeping?” “O mother, I cannot sleep,” replied Krishna. “All right dear, listen to another wonderful story which will make You sleep,” said Yashoda. “Yes, please tell Me,” answered Krishna.

Yashoda continued, “…then Nrisimhadeva appeared from a pillar to kill the demon Hiranyakasipu.” When He heard this wonderful story Devaki-nandana’s face brightened with a sweet smile.”

Here mother Yashoda tied Krishna to a grinding mortar which He accepted as great fun. This sacred place is called Yamalarjuna-bhanjana-tirtha. The wonderful kunda situated here has very pure water. By fasting and taking bath in this kunda one accrues unlimited fruits and becomes worshipable on Indraloka. This is the temple of Gopishvara whose darshana will destroy the most heinous types of sins. This Mahavana is very dear to Krishna, who performed many pastimes here. See here the Sapta-samudra-kupas. In the Puranas it is described that the performance of pinda here gives one his desired results.”

In the Adi-varaha Purana it is stated: “The eighth forest, Mahavana, is always My favorite. A man who visits here can be worshiped in the abode of Indra. Yamalarjuna-tirtha and kunda are in Mahavana. At this holy tirtha, Krishna, as a little boy, toppled a cart, breaking the vessels of milk and curd. Fasting and bathing here gives unlimited results. Gopishvara Mahadeva, the destroyer of all sins, resides here in Mahavana.”

Shri Raghava said, “O Shrinivasa, it was here that Shri Chaitanya became overwhelmed in ecstatic joy upon seeing the place of Krishna’s birth festival. In great love the Lord became absorbed in dancing and singing. And by distributing His mercy, He captivated the hearts of all. People came from all directions and chanted the name of Hari in ecstasy upon seeing Mahaprabhu. Everyone’s eyes shed tears as they exclaimed that this man was not a sannyasi, but Krishna Himself. By the influence of the Lord’s love, people became mad and fell to the ground in ecstasy. Who has the power to understand the activities of Shri Gaurachandra? Mahavana thus became a vast ocean of bliss. Shri Chaitanya remained here agitated in love while seeing the Deity of Madana-gopala. Who can describe the supernatural and divine pastimes of Mahaprabhu?”