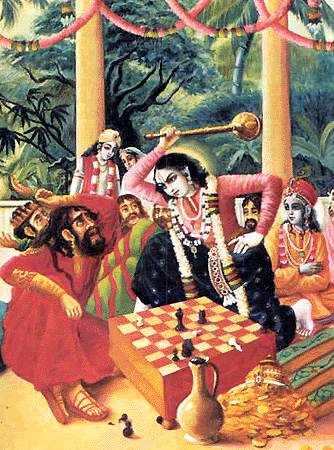 “The King of Kalinga was a friend of Rukmi’s and he gave him ill advice to play with Balarama and thus defeat Him in a bet. Amongst the ksatriya kings, betting and gambling in chess was not uncommon. If someone challenged a friend to play on the chessboard, the friend could not deny the challenge. Sri Balaramaji was not a very expert chess player, and this was known to the King of Kalinga. So Rukmi was advised to retaliate against the family members of Krsna by challenging Balarama to play chess. Although not a very expert chess player, Sri Balaramaji was very enthusiastic in sporting activities. He accepted the challenge of Rukmi and sat down to play. Betting was with gold coins, and Balarama first of all challenged with one hundred coins, then 1,000 coins, then 10,000 coins. Each time, Balarama lost, and Rukmi became victorious.

Sri Balarama’s losing the game was an opportunity for the King of Kalinga to criticize Krsna and Balarama. Thus the King of Kalinga was talking jokingly and purposefully showing his teeth to Balarama. Because Balarama was the loser in the game, He was a little intolerant of the sarcastic joking words. He became a little agitated, and when Rukmi again challenged Balarama, he made a bet of 100,000 gold coins. Fortunately, this time Balarama won. Although Balaramaji had won, Rukmi, out of his cunningness, began to claim that Balarama was the loser and that he himself had won. Because of this lie, Balaramaji became most angry with Rukmi. His agitation was so sudden and great that it appeared like a tidal wave in the ocean on a full moon day. Balarama’s eyes are naturally reddish, and when He became agitated and angry His eyes became more reddish. This time He challenged and made a bet of a hundred million coins.

Again Balarama was the winner according to the rules of chess, but Rukmi again cunningly began to claim that he had won. Rukmi appealed to the princes present, and he especially mentioned the name of the King of Kalinga. At that time there was a voice from the air during the dispute, and it announced that for all honest purposes Balarama, the actual winner of this game, was being abused and that the statement of Rukmi that he had won was absolutely false.

In spite of this divine voice, Rukmi insisted that Balarama had lost, and by his persistence it appeared that he had death upon his head. Falsely puffed up by the ill advice of his friend, he did not give much importance to the oracle, and he began to criticize Balaramaji. He said, “My dear Balaramaji, You two brothers, cowherd boys only, may be very expert in tending cows, but how can You be expert in playing chess or shooting arrows on the battlefield? These arts are well-known only to the princely order.” Hearing this kind of pinching talk by Rukmi and hearing the loud laughter of all the other princes present there, Lord Balarama became as agitated as burning cinders. He immediately took a club in His hand and, without any further talk, struck Rukmi on the head. From that one blow, Rukmi fell down immediately and was dead and gone. Thus Rukmi was killed by Balarama on that auspicious occasion of Aniruddha’s marriage.

These things are not very uncommon in ksatriya society, and the King of Kalinga, being afraid that he would be the next to be attacked, fled from the scene. Before he could escape even a few steps, however, Balaramaji immediately captured him and, because the King was always showing his teeth while criticizing Balarama and Krsna, broke all the his teeth with His club. The other princes who were supporting the King of Kalinga and Rukmi were also captured, and Balarama beat them with His club, breaking their legs and hands. They did not try to retaliate but thought it wise to run away from the bloody scene.

During this strife between Balarama and Rukmi, Lord Krsna did not utter a word, for He knew that if He supported Balarama, Rukmini would be unhappy, and if He said that the killing of Rukmi was unjust, then Balarama would be unhappy. Therefore, Lord Krsna was silent on the death of His brother-in-law, Rukmi, on the occasion of His grandson’s marriage. He did not disturb either His affectionate relationship with Balarama or with Rukmini. After this, the bride and the bridegroom were ceremoniously seated on the chariot, and they started for Dvaraka, accompanied by the bridegroom’s party. The bridegroom’s party was always protected by Lord Krsna, the killer of the Madhu demon. Thus they left Rukmi’s kingdom, Bhojakata and happily started for Dvaraka.”