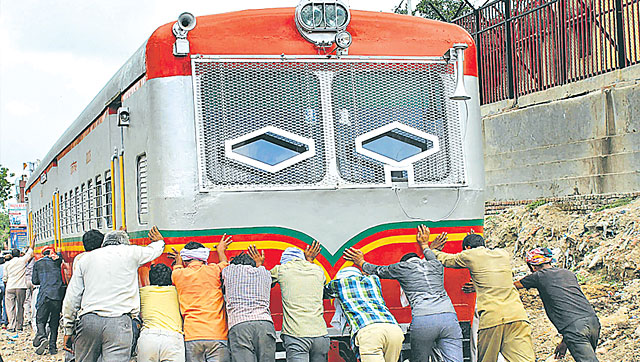 It was a unique scene when passengers of a railbus, that plies between Mathura and Vrindavan, pushed it to start its engine, near Mathura station on Wednesday.

The one-coach railbus’s engine developed a technical snag and stopped near Masani station after which, on the suggestion of driver, the passengers tried to start the engine by pushing it for around a half a kilometre but failed as the problem was major.
Plying on meter gauge, the railbus comes under North Central Railway and halts at all the stations on the 12 km stretch.

On several occasions, the railbus is cancelled without any prior information and the only running railbus has become unreliable now, stopping frequently without apparent cause. Many times, travellers appealed to authorities to renovate the railbus but the condition remains the same, informed a source in Mathura.

Bhupinder Dhillon, the public relation officer of Agra division, admitted on Thursday that the engine of railbus failed due to some technical issue. Over allegation of passengers pushing the railbus, she said the driver might have thought that the engine could be kick start by pushing.