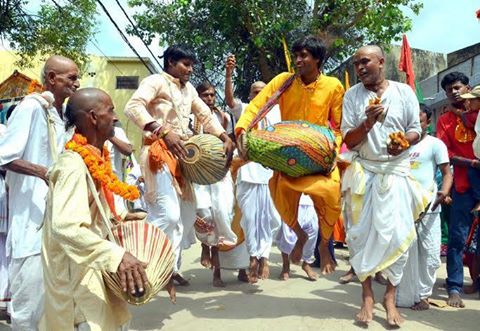 It was a big relief for the Mathura District administration as the Guru Purnima festival ended peacefully and without any hassle on Friday. No casualty has been reported. The District Magistrate of Mathura Shri Rajesh Kumar and his team of officials handled this mega event very well so that it passed off without any disaster. The District Magistrate had personally overseen the mela arrangements by riding on the bike with SP city Shri Shailesh Pandey, the photo of which went viral on the social media.

Although the official figures quoted it were 80 lac people who performed the parikrama on this occasion, but the footfall was more than a crore, claimed the residents of Goverdhan. This was the highest ever turnout of devotees in the history of Goverdhan during a day. The footfall was much more than it was predicted.

A big number of police personnel were deployed in the fair to maintain the law and order. The District Authorities were on high vigil after the Gurdas Pur terror attack.

Mooriya Puno, or the Guru Purnima, is the biggest festival of Govardhan and also a popular festival of Vrindavan as most of the Spiritual masters of Vraja reside either of these two places, while Govardhan has an added attraction of the Giriraj Parikrama. Even after it was difficult to move in the big crowd there was no sign of anxiety on the faces of the pilgrims who inched their way to complete 21 kilometers long parikrama of the holy hill, by shouting Girraj Baba ki Jai.

The festival commemorates with Guru Purnima, which also marked as the disappearance day of Shrila Sanatan Goswami. The term Muriya refers to the shaving of heads that the vaishnavas performed in mourning of Sanatan Goswami’s disappearance. Since Sanatan Goswami is often credited with the restarting of circumambulating Giriraj, this has become the principal way of commemorating him. The pilgrims performed their ritual by visiting the famous temples of Govardhan, including Mukharvind and Danghati, bathing in the Manasi Ganga and other tanks.

The primary attraction of the mela was the procession in honor of Sanatan Goswami that began from the Radha Shyam Sundar Mandir at Chakleshwar.

In Vrindavan, special puja was performed at the Sanatan Goswami Samadhi near Madan Mohan temple. Suchak Kirtan glorifying Sanatan Goswami was performed by the babajis from Radha Kund. A feast was also organized after the Kirtan. The devotees from all around the town particularly from the Gaudiya Sampraday visited the shrine to pay respect to the Great Acharya.

The disciples from all over the country visited the ashrams of their spiritual masters to pay respect on the auspicious occasion of Guru Purnima. The devotees thronged in various ashrams and mutts to worship their gurus. They brought garlands, fruits and sweets to offer to their gurus. They visited the Banke Bihari Temple and other temples after worshipping their gurus.