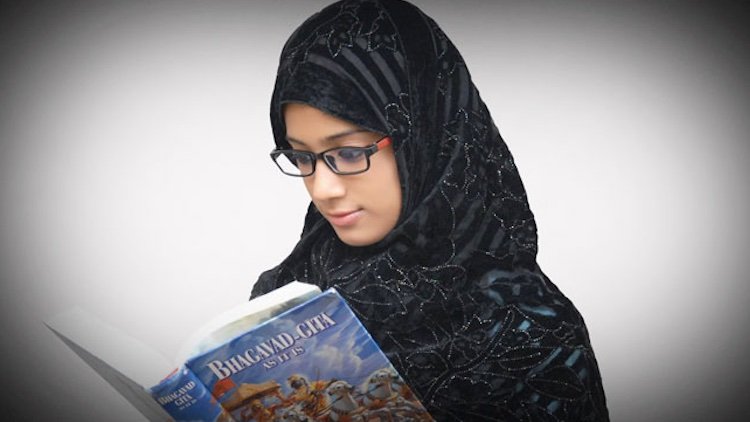 The Indian media is exploding with the story of Maryam Siddiqui, a 12-year-old Muslim girl from Mumbai who came first place in her class in the Gita Champions’ League, an annual contest organized by ISKCON Chowpatty, but gave away her winnings to humanitarian efforts.

Back in March, Siddiqui was initially awarded 5,000 rupees by ISKCON for being the highest ranking sixth standard student in the contest, based on Srila Prabhupada’s Bhagavad-gita As It Is.

“I have always been inquisitive about religions and I often read up on them during my free time,” said Maryam. “So when my teacher told me about this contest I thought it would be a good chance to understand what the book is about.”

Maryam, daughter of Asif and Farhan Siddiqui, promptly returned the money to the Uttar Pradesh government with the request that it be used to educate orphaned and needy children in UP.

“Education is the only route to change their destiny,” she said. “I’m grateful to the UP government for conferring this honour on me. I, however, have the means to lead a reasonable life because the Almighty has been kind to my parents. But there are many children who are not as lucky as me. So, I have decided to return the cash award to the state government so that it can be used for the betterment of children in need.”

Since then, Maryam has been congratulated in person by Maharashtra Governor Vidyasagar Rao and Indian Prime Minister Narendra Modi, and attended many events organized to congratulate her and promote her ideologies. At each one, she has donated checks of Rs. 11,000 to various charities in different states, including Prime Minister Modi’s National Relief Fund and his Clean India Mission.

The International Society for Krishna Consciousness has been mentioned as the organizer of the Gita contest in reports throughout all Indian national newspapers and TV channels, as well as in a tweet by Prime Minister Modi, who added, “Maryam’s interest in various religions is an inspiration to all Indians.” 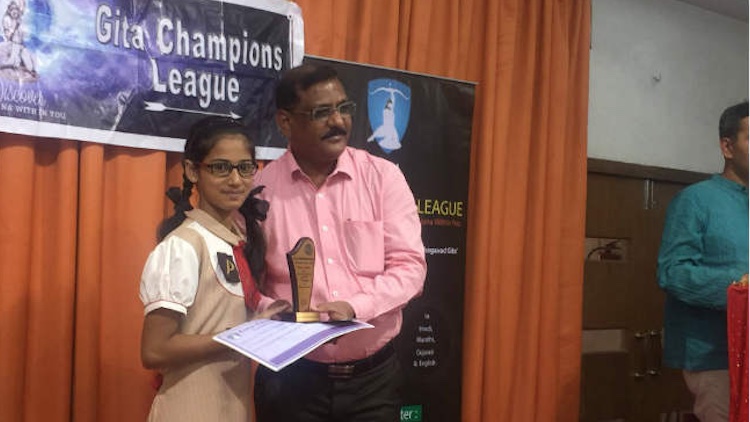 Of course, as well as commending Maryam for her her charitable work, and being glad for the many who will be benefitted by her efforts, it’s important to congratulate all the other winners in the Gita Champions’ League, and to note the benefits of the contest itself.

Over 4,800 students from fifth to tenth standard (aged 10 to 16), from more than 100 schools in Maharastra, participated. And at a March 15th ceremony in a hall near ISKCON Chowpatty, first, second, and third place awards were given to students from each standard (Maryam was awarded first place for sixth standard). Each student received a cash prize, a certificate, and a set of Srila Prabhupada’s books. Teachers who helped run the contest also received gifts.

The ceremony also included a Bhagavad-gita lecture by ISKCON Chowpatty co-president Govinda Das, a talk on the importance of reading the Gita by the Deputy Municipal Commissioner of Mumbai, and a prasadam feast for the 300 students and teachers, dignitaries and ISKCON Chowpatty congregation devotees who attended.

It was these congregation devotees who visited each school, enrolled students, and conducted exams in an effort to convey to students the higher knowledge of the Bhagavad-gita from a young age.

“Impressions are created so that when they grow up, they can again take shelter of Bhagavad-gita in times of need,” says contest organizer Anand Chaitanya Das.

The Gita Champions’ League contest is based on a booklet that summarizes the eighteen chapters of ISKCON Founder Srila Prabhupada’s Bhagavad-gita As It Is. Each chapter includes several lessons – such as “We are not the temporary body, but the eternal soul” in the second chapter, “offering everything to Krishna is the greatest peace formula” from the fifth chapter, and “the ultimate goal is to surrender to Krishna,” from the eighteenth chapter.

The devotees of ISKCON Chowpatty are making sure this knowledge is available to everyone, discounting course materials so that schools in poorer municipalities can afford them too.

“As a result, thousands of children who wouldn’t have otherwise been exposed to the Bhagavad-gita are getting to know about it,” says Anand Chaitanya.

The results have been self-evident.

“Nowadays noise levels in my classes have greatly reduced, because as soon as students get free time, they start studying your book,” one teacher told devotees.

Teachers themselves as well as principals have been invited to “satsang” programs with Bhagavad-gita discussion.

And next year, ISKCON Chowpatty is planning to cast a much wider net with the Gita Champions’ League, making the contest and exams for it available online so that students all over India and not just in Mumbai can participate.

“We are trying to reach out to as many students as possible,” says Anand Chaitanya.