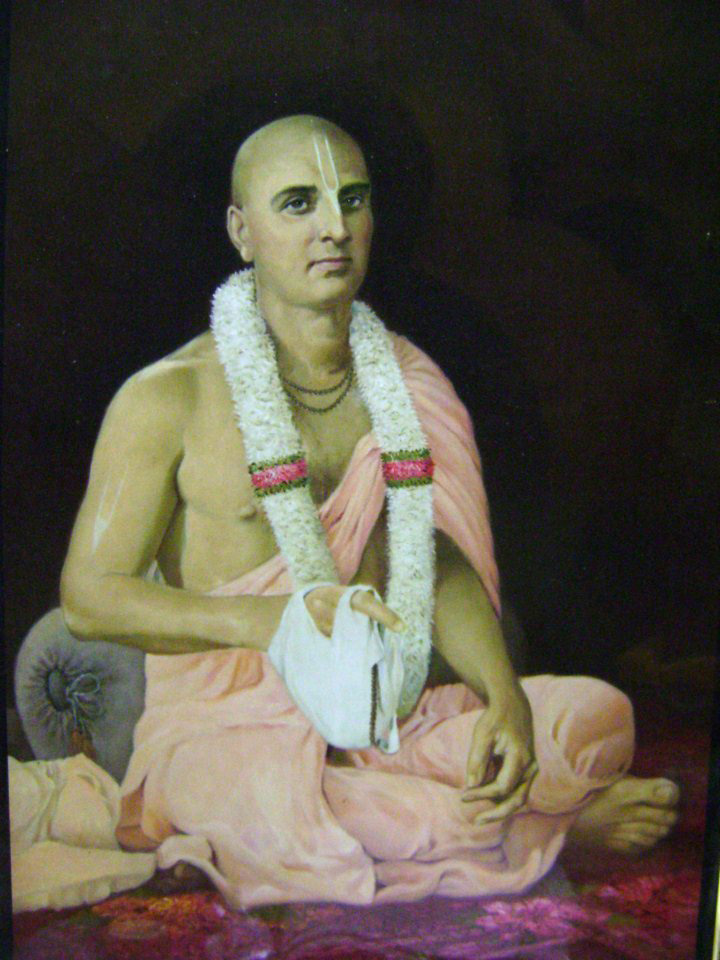 One of the disciples of Sree Chaitanya Gaudiya Math requested Him that if He can come and perform shraadha (ceremony ritual to pay homage to departed souls) of disciple’s deceased father. Disciple said that his father was not a devotee, however, if Srila Madhav Maharaj will conduct this ceremony, then disciple’s father will be benefited.

During the preaching programs in Kolkata, Srila Madhav Maharaj asked Srila Bhakti Ballabh Tirtha Goswami Maharaj, Sri Mangal Nilay Prabhu and one of His godbrothers (Srila Krishna Keshav Brahmchari) to go to Assam. The train to Assam was delayed, due to which the devotees could not reach the destination on time. When they were bit far from the house of the said devotee, who has invited, the trio saw that the function is over, and everyone is washing hands after honoring prasadam, etc.

Srila Mangal Nilay prabhu said that this is not nice. They did not wait for us and have concluded the program. So, we shall not go there now. Srila Tirtha Maharaj said that you are right. But, if Srila Gurudeva will ask about the program, then what will we reply. Delay was not because of us, but because of train. Srila Krishna Keshav prabhu agreed with Srila Tirtha Maharaj. So, all three went to devotee’s house.

Devotees were pleased to see them. They asked that why you did not come with Sri Madhav Maharaj? Had you come with Him, it would have been very nice. Sril Keshav Prabhu said that we have program of our Kolkata Math, so Sri Madhav Maharaj could not come. He has sent us. The devotees in the house stood stunned.

Then the disciple (host) came forward and said that what are you saying? Sri Gurudeva Madhav Maharaj came here. He gave a lecture (discourse), performed the ceremony and has just left after honoring prasadam. This time these three were stunned and began wondering that how is this possible? Host took them around and pointed where Srila Madhav Maharaj sat to give lecture, and where He performed ceremony and where He sat to honor prasadam, and so on. After that the three devotees bathed, honored prasadam, performed sankirtan in the evening and left for Kolkata , next day.

Once they reached Kolkata, they asked the resident devotees, that who was giving lecture yesterday. All answered that Srila Gurudeva and other Sannyasi (renounced) devotees gave lecture. Then these devotees inquired that in between did Srila Gurudeva went away for 2-3 days? The answer was negative. They were informed that two days back Srila Gurudeva along with lecture, lead Sankirtan as well. They were surprised.

Srila Tirtha Maharaj said, ‘ Our train was delayed. When we reached there, we heard from devotees that Yourself performed the ceremony, gave lecture, etc. ‘

Srila Madhav Maharaj smiled, but did not reply.

Srila Tirtha Maharaj again said that how could this be possible that Yourself were performing Sankirtan in Kolkata with devotees as well as performing ceremony in Assam (Assam is very far from Kolkata) at the same time.

Srila Madhav Maharaj did not reply and said, ‘You have traveled for so long. Freshen up and honor prasadam.’