“Yes, everywhere,” Srila Prabhupada said. “This chanting should go on. Instead of meetings, resolutions, dissolutions, revolutions, and no solution, there should be chanting.”

Due to the efforts of ISKCON Boston well-wishers Michelle Wu, Boston City Councilor At-Large, and Amit Dixit, Executive Director of Boston’s South Asian Arts Council, devotees recently had the opportunity to take one more step toward fulfilling Srila Prabhupada’s desire to infect the halls of government with the “disease” of Krishna consciousness.

Greater Boston is home to one of the United States’ largest populations of Nepalese. At the same time, ISKCON Boston is a spiritual home to a small but growing number of devout members of that ethnic community. These two threads converged when Mr. Dixit, a mover and shaker across the many cultures comprising Boston’s South Asian community, swiftly and spontaneously organized a rally and candlelight vigil in Downtown Boston to heighten awareness of the urgent plight of the Nepalese people after the devastating April earthquake.

While shocked and saddened by the earthquake’s destruction and loss of life, Dixit, a long-time member of the Boston congregation, recognized the opportunity for the Mahamantra to sooth the pain of a Nepalese community temporarily powerless to aid relatives half a world away.

Amongst the dignitaries at the vigil was Michelle Wu. Ms. Wu is Boston’s first Chinese-American and first Asian-American woman to serve on Boston City Council. An ally of Boston’s diverse South Asian communities, she is able to take advantage of a unique opportunity available to the city’s council members. According to council rules, a councilor “shall have the honor of recognizing persons, groups, and events of significant importance to the City of Boston”.

Ms. Wu thus decided to honor ISKCON Boston with verbal accolades and also to make an unprecedented request that devotees offer an opening prayer — chanted, not simply recited — at the beginning of a session. Not only would devotees’ presence, words and voices remind onlookers of the pressing needs of Nepal in the wake of the tragic earthquake, but the appearance would also initiate municipal focus on ISKCON’s upcoming 50th Anniversary celebrations.

The meeting, conducted in council chambers with full attendance of council members and the presence of small galleries of municipal aides, local journalists and community members, was called to order by Council President Bill Linehan, who promptly turned the meeting over to Michelle Wu. She read a brief description of the ISKCON Boston temple, then introduced the invocation speaker, Partha Biswas (Parama Rupa Dasa). Parama Rupa and Bhaktin Karuna Randolph each presented a councilor with a beautiful and fragrant garland, after which Temple President Pyari Mohan Dasa gifted each with a copy of “Bhagavad-Gita As It Is”. 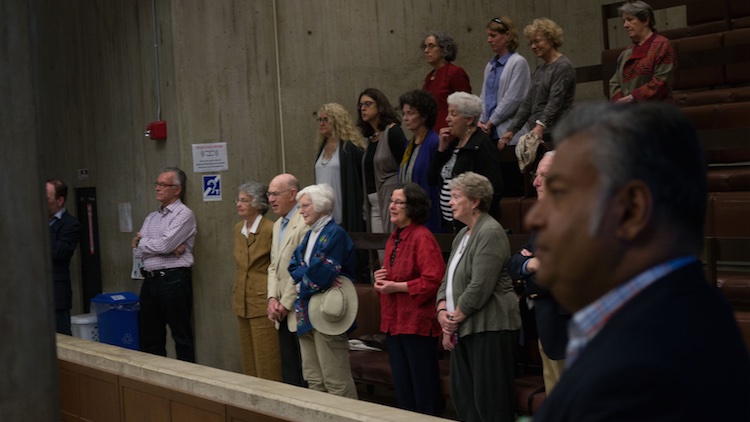 While attendees stood, listening attentively, some bowing their heads respectfully, Parama Rupa offered a succinct yet powerful invocation that touched upon tragedy, renewal, the interconnectedness of humanity, and Srila Prabhupada’s compassion. He then joined devotees in front of the speaker’s dais for a brief kirtan. As their voices filled the council chamber onlookers were seen smiling and nodding, or heard tentatively singing along. When the chanting ended, constrained by predetermined time limits, the devotees quickly saluted their audience with pranams, collected their belongings and went on their way, leaving officials to get back to what they know best — attempting to administer for the ultimate welfare of their constituents.

Yet, “Whatever action a great man performs, common men follow. And whatever standards he sets by exemplary acts, all the world pursues.” [Bg 3.21] As one leader picks up this process of Krishna consciousness, so will another, and another, and another. Moreover, as the leaders do, so will their dependents.

As our kings, presidents, religious leaders, local politicians, teachers and parents are reminded of their original constitutional position and propagate their knowledge, society comes closer to fulfilling Srila Prabhupada’s declaration of one of the principles of real spiritual leadership — “Instead of meetings, resolutions, dissolutions, revolutions, and no solution, there should be chanting.” May the devotees always continue chanting and showering Srila Prabhupada’s mercy in every town and village.