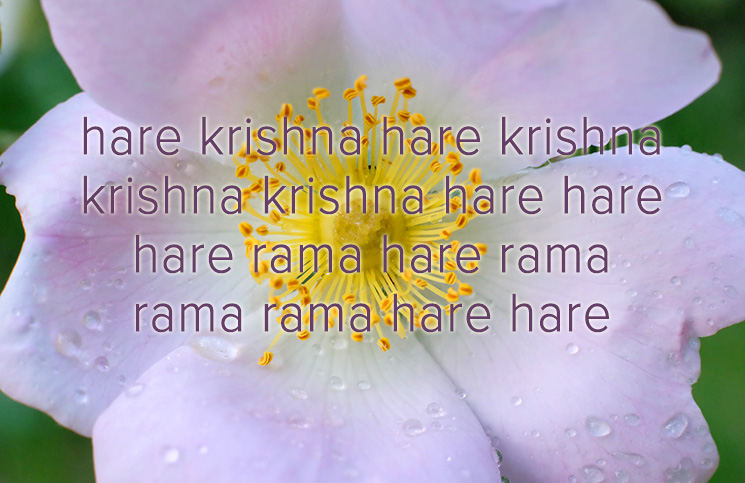 We’ve all heard the Hare Krishna mantra at some time, but what the heck is so special about this mantra? Why are we supposed to spend time chanting it? What can it do for us?

First of all, let me explain a little about mantra-yoga. Mantra-yoga is actually a mystical tradition found in almost every spiritual path in the world. It may involve the softly spoken repetition of a prayer or mantra for one’s own meditation, or it may be the congregational singing of spiritually uplifting songs, prayers, or the sacred names of the Supreme Being. It all involves the same process, but in the Eastern tradition it is called mantra-yoga because it is the easy process of focusing our minds on the Supreme, which helps spiritualize our consciousness. Man means the mind, tra means deliverance. Therefore, a spiritual mantra is the pure sound vibration for delivering the mind from material to spiritual consciousness. This is the goal of any spiritual path. Although all spiritual traditions have their own prayers or mantras, the Vedic mantras are especially powerful and effective in uniting us with the spiritual realm. However, a complete yoga process is generally a blend of a few yoga systems, such as bhakti-yoga with mantra-yoga. Therefore, bhakti-yoga, as described in the previous chapters, also includes mantra-yoga, or the process of concentrating on the sound vibration within a mantra. This is especially important in this age of Kali.

Many years ago the brahmana priests could accomplish many kinds of wondrous deeds simply by correctly chanting particular mantras. Many of these mantras still exist, but it is very difficult to find those who can chant them accurately. This is actually a safety measure because if the wish-fulfilling mantras were easily chanted, there would no doubt be many people who would misuse them. But other mantras that are available can easily help purify one’s consciousness, give spiritual enlightenment, and put one in touch with the Supreme.

In Bhagavad-gita (10.25) Sri Krishna explains that He is the transcendental om mantra and that the chanting of japa (chanting a mantra quietly for one’s own meditation) is the purest of His representations and sacrifices. It is understood that by chanting japa and hearing the holy sounds of the mantra, one can come to the platform of spiritual realization. This is the process of mantra-yoga. Even though the mantra is powerful in itself, when the mantra is chanted by a great devotee, it becomes more powerful. This is the effect when a disciple is fortunate enough to take initiation from a spiritually powerful master who gives him a mantra for spiritual purposes. Then the disciple can make rapid progress by utilizing the mantra.

In this age of Kali-yuga the process of chanting japa or mantra meditation is much more effective than practicing other spiritual paths that include meditating on the void or Brahman effulgence, or trying to control the life air within the body as in raja-yoga. Only a very few can become perfect at moving the life air up to the top of the head or raising the kundalini force up through the various chakras. And meditating on the void becomes useless as soon as there is the slightest external distraction, which in this age of Kali is a continuous thing. Therefore, the most effective means of focusing the consciousness is to concentrate on the sound vibration of a mantra.

Omkara (pranava) is considered to be the sound incarnation of the Supreme Personality of God and is identical with the Supreme Lord. It is beginningless, changeless, supreme and free from any external contamination. The Narada-pancharatra states: “When the transcendental sound vibration is practiced by a conditioned soul, the Supreme Lord is present on his tongue.” The Atharva-veda and the Mandukya Upanishad both mention the importance of omkara. Omkara is said to be the beginning, middle, and end, and is eternal, beyond all material restrictions or contaminations.

Actually, the chanting of omkara is generally practiced by those engaged in the mystic yoga process. However, anyone who chants Vedic verses will also be chanting om, because om is often included as the bija or seed mantra at the beginning of many such verses or other mantras. By chanting om and controlling the breathing perfectly, which is mostly a mechanical way of steadying the mind, one is eventually able to go into trance or samadhi. Through this system, one gradually changes the tendencies of the materially absorbed mind and makes it spiritualized. But this takes many years to perfect and such a slow process is hardly practical in this age. If one is not initiated into the brahminical way of knowledge, he will find it difficult to understand the depths of omkara and will not likely be able to get the desired results from chanting it. Therefore, it is not advised that people in general chant omkara in this age of Kali-yuga and with the expectation of reaching full spiritual perfection because they are often not qualified or unable to chant it properly to attain the inner depths of spiritual completion.