In the Vedas we have Kamadeva who is known as the God of love and around 600AD in the country known as present day Thailand we had Camadevi, the Queen of Lanna. Camadevi was the daughter of the King of Lobpuri, which was originally Lavapuri, named after the son of Rama. Legend has it there was an ancient sage named Suthep, a Sanskrit name meaning great God, Su being Sanskrit for good or great and Thep, like theo is a corruption of Deva meaning God. 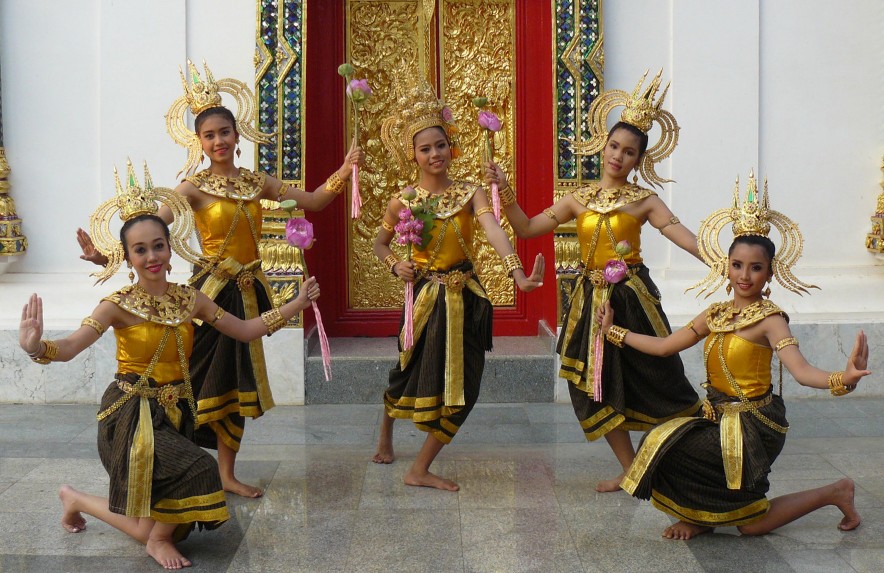 In collaboration with the Buddhists, Suthep invited the princess to become their Queen of what is now known as Lomphun, of which she happily obliged. She named her Kingdom Haribhunjaya which means the victorious land of Hari. The inhabitants were known as the Lavas who were country dwellers and the Mons who were more urban, city dwellers. Shortly after being coronated, in true Ayodhya style, she gave birth to twins, of which one would be her successor. Camadevi is a popular figure among the people of Thailand, not just because she was a great Queen and part of the early history of Thailand but also as an icon of female emancipation. Her statue has become a place of devotion and people go to seek her many blessings. Her son, King Mahanadayok built the Chama Devi Wat as a memorial where he stored her ashes, her comb, her mirror and the remains of her favourite elephant.

As far as recorded history, this is pretty much the beginnings of ancient Siam now known as present day Thailand. The Thai people apparently migrated from southwest China to southeast Asia over a period of many centuries. They are first mentioned as Siamese in a 12th century A.D. inscription of Angkor Wat in Cambodia, where they are referred to as Syam or dark coloured people. The European sea farers of the 16th century referred to the sea route as the “Road of Syam”. Syam is of course the name for Krsna which refers to him as having a complexion like a dark coloured rain cloud. The Thailand people refer to themselves as Muang Thai. 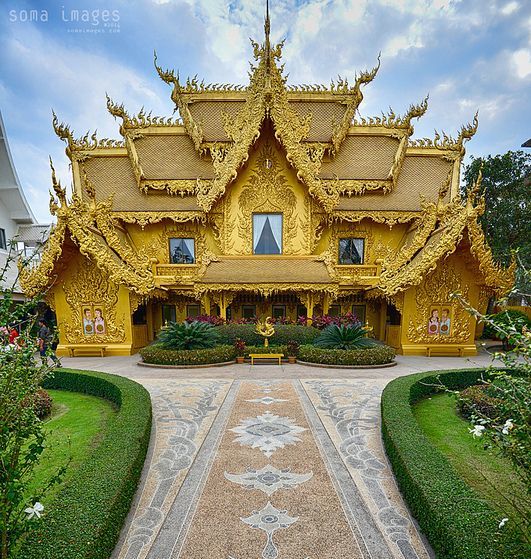 The successors to Queen Camadevi are names which are full of Vedic/Sanskrit nomenclature – Rudantra – Samsara – Padumaraj – Kusadeva – Dasaraj – Yuvaraj – Vasudeva – Ganga, and from 1737 to the present day all the kings are named Rama. Thailand is made up of some 77 states and there are over 40 states which are Vedic/Sanskrit place names. Throughout the length and breadth of Thailand we can see its Vedic/Sanskrit footprints, here are 20 of the 72 provinces that we can confirm are Vedic/Sanskrit – 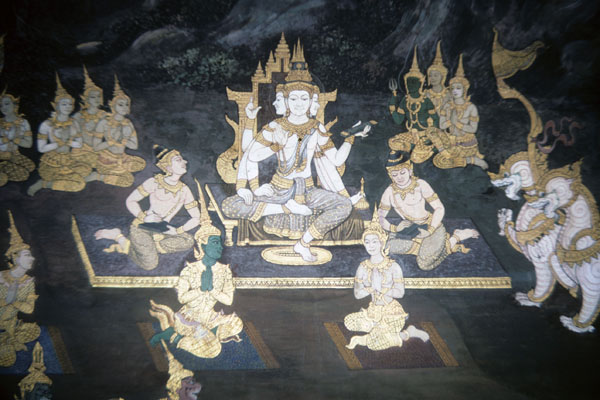 The Thai Ramayana is by far the most popular story in Thailand and has been for centuries. Known as the Ramakien, from Sanskrit Ramakhyana meaning the long epic of Rama. Its influence on Thai culture is impossible to understate, their concept of monarchy is based upon Ramayana, it pervades its literature, sculpture, architecture and handicrafts. In the performing arts there are the Khon, Nang Yai, Nan Talung and various kinds of puppets which perform the Ramakien. And from this comes a whole industry of drama, dance, music, singing, recitation, choreography, costumes, mask making and puppet making.

The Ramayana is particularly appealing to Thais as it presents the story of an ideal King who symbolises the age old concepts of virtue or Dhama. The capital of Thailand was once Ayutthaya which is simply a corruption of Ayodhya the kingdom of Rama. It is said that when Ayutthaya was being destroyed by the Burmese, King Takshin, who was busily engaged in fighting and repelling the attack, paused to write down a few episodes of the Ramayana. The Kings who modelled themselves upon Rama were monarchs and even some declared themselves as Avataras, however it was never absolute monarchy. Like Rama himself it was constitutional monarchy and the Kings especially under the influence of the Buddhists had to rule by Dharma and virtue. 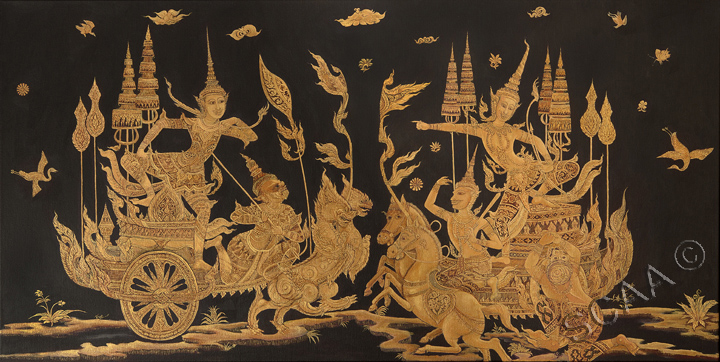 Throughout Thailand there are many folktales associated with Ramayana. In Saraburi there is a mountain with a big hole through one side. The tale tells how Ravana carried Sita in his chariot and while passing he caught the mountain with the axle of his chariot creating a big hole. Both Chonburi and Phatta lung claim to be the place where Bali fought with the buffalo named Dundhubi because the earth around the caves in both places is red like the buffalo’s blood. In one tale, Rama returned to Ayudhya after the end of the war, wishing to reward Hanuman, Rama shot an arrow and told Hanuman to follow it. The place where the arrow fell would be Hanuman’s city to rule. The arrow fell upon Lop Buri where the earth turned white because of the heat of the arrow’s impact. This story explains the white earth which Lop Buri people use for making talcum powder. These are just a few of the many folk tales throughout Thailand which reflects how closely they associate with the story of Rama. 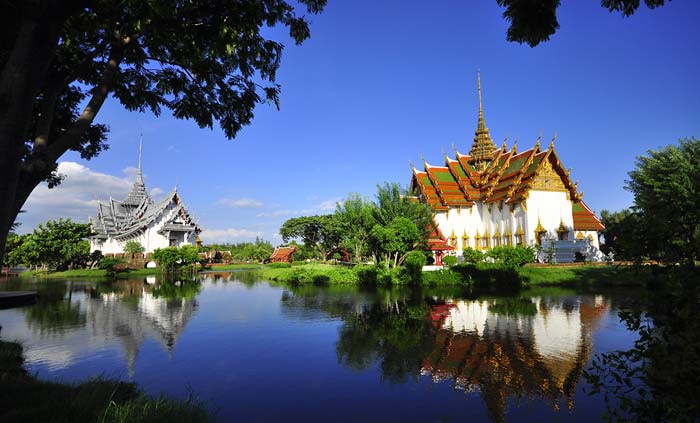 LAMPHUN – Lamphun is the ancient city which was once called Hariphunjaya, Hari a name of Visnu, Phun is Sanskrit Bhumi meaning earth, land, district and Jaya is Sanskrit fot victory – The victorious land of Hari – YALA – Yala in Thailand means net as in fishing net and it comes from the Sanskrit Jala which also means net – NAKHON SAWAN – Nakhon Sanskrit Nagara for city and Sawan Sanskrit Svarga meaning heaven – Heavenly city – UTTARADIT – Uttara is Sanskrit for north and this reflects its name which is known in Thailand as the northern city – MAHASARAKHAM – Maha is Sanskrit for great, Sara is Sanskrit for wealth and Kham is Pali for gold – The great wealth of gold – PATTANI – Pattani comes from the Sanskrit Pathini meaning pure woman – SONGKHLA – Songkhla according to academia is a corruption of Singgora which is Sanskrit for lion city – CHAINAT – Chai is Sanskrit Jaya meaning victory and the name means victory city – SAKON NAKHON – Sakon Sanskrit Sakala meaning whole, total and Nakhon Sanskrit Nagara meaning city – City of cities – PATHUM THANI – Pathum is Sanskrit Padma meaning lotus and Thani is Sanskrit Stan meaning city. In Thailand the province is known as lotus flowered city.

KALASIN – Its name is derived from a pond of black water, Kala is Sanskrit for black – PRACHEUP KHIRI KHAN – Its name means the city of mountains Khiri is the Sanskrit Giri meaning mountain – UTHAITHANI – Uthai is Sanskrit Uttara meaning northern and Thani Sanskrit Stan meaning city – Northern city – CHAIYAPHUM – Chaiya Sanskrit Jaya meaning victory and Phum Sanskrit Bhumi meaning land or district – Land of victory – SURIN – Sura is Sanskrit for God and the In is an abreviation of Indra, hence the province literally means Lord Indra, and as confirmation the official provincial seal is Lord Indra sat atop his great mount Airavata – PHETCHABUN – Phetcha is Sanskrit Bhojya meaning food, eatables and Bun Sanskrit Bhumi meaning land or district. The province is known as the city of plenty of crops – NAKHON RATCHASIMA – Nakhon is Sanskrit Nagara meaning city, Ratcha is Sanskrit Raja meaning King and Sima is Sanskrit Simha meaning lion – The city of the lionking.

Above is the Phanom Rung, a temple built in honour of Lord Siva, its original name is Prasat Hin Phanom Rung. Prasat comes from Sanskrit Prasad meaning castle, temple or mercy. The temple complex is situated in Buriram, a province of Thailand. Buri is Sanskrit puri meaning city and Ram means pleasure or happiness – The city of happiness. Built upon the rim of an extinct volcano, some 400 metres high, it is built in honour of Lord Siva and mount Kailasa. 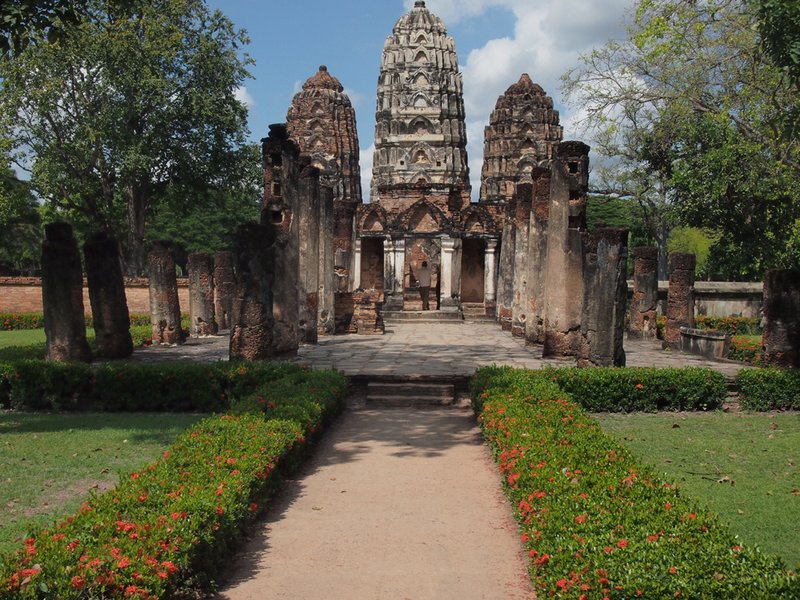 Above is the Wat Sri Sawai temple, an ancient Hindu temple dating back to the 12th century. As is the usual process it was eventually taken over by the Buddhists as Siam made the transition from Vedic to Buddhist. Wat is a corruption of Sanskrit Vat meaning enclosure, Sri means Goddess, wealth, beauty and Sawai means superior. The three towers represent the guna Avataras Visnu, Brahma and Siva. The temple is situated in the province of Sukhothai whose name means dawn of happiness, Sukho a corruption of Sanskrit Sukha meaning happiness.

Above is the Prasat Preah Vihear temple, whose ownership is hotly disputed between Thailand and Cambodia, being built on the border between these two countries. Prasat is Sanskrit prasad meaning castle or temple, Preah is from Sanskrit Priya meaning loved, devoted or by extension sacred, and Vihear is Sanskrit Vihara meaning abode, the people of Thailand call it “the castle of celestial abode”. Sitting some 2000 ft above sea level it has been built as a representation of mount Meru, the home of the Gods. Like Angkor Wat in Cambodia, the Preah Vihear temple has been declared a world heritage site.

Garuda is the national emblem of Thailand hes called the Phra Khrut Pha – Which means “Garuda as the vehicle” ( of Visnu ). Garuda was officially adopted as the national emblem by Rama VI in 1911. However this Vedic deity has been a symbol of royalty in Thailand for centuries, depicted on seals used by Thai Kings and governments to authenticate documents. The language of Thai is mainly Sanskrit and Pali which is derived from Sanskrit. Over half the words in Thai language are from Sanskrit and Pali, and many scholars agree that the Thai script is old Khmer which is modelled after the Brahmic script of the Indic family. From the 1st century AD to present day Thailand the monetary coins have been inscribed with various Vedic symbols such as conchshells, Dharma wheels, Sanskrit words, swastikas, Lord Sivas Trisula, Srivatsa, chakras, Airavata, ect.

The people of Thailand never call their capital city Bangkok, in fact some in remote places have never even heard of the name. Instead the name for the capital of Thailand as accepted by the Thais themselves is Krung Thep which means “city of angels”. Its full name is –

“The city of angels, the great city, the residence of the emerald Buddha, the impregnable city of Ayutthaya, of God Indra, the grand capital of the world endowed with nine precious gems, the happy city, abounding in an enormous royal palace that resembles the heavenly abode where reigns the reincarnated god, a city given by Indra and built by Vishnukarn “.

Altogether that makes 38 out of 77 Thailand provinces which are Vedic/Sanskrit and there are others which are at the least partially Sanskrit such as – Kanchanaburi – Krabi -Phattalung and Sisaket and the others we dont yet know about. Anyone wishing to view these names can simply click on the following URL and click on the names on the map and most of these names have an etymological explanation given by Wikipaedia –