“Many countries have invested quite heavily in plans to bring back into use land abandoned for hundreds of years, or land that has never been used at all. They have brought all kinds of heavy earth moving tractors and machines for land development and introduced new forms of power into their agriculture.

In many cases tractors, machines and implements have been brought in without taking into account the position of the cultivator, of the man who works on the land and who must ultimately make these things pay. And frequently they have been purchased before sufficient training and maintenance facilities were available. Of course, there are also exceptions and some land development and mechanisation projects have proved successful from their inception.”

The above is a quotation from ‘unesco’ Food and Agriculture organisation. The enthusiasm for tractors over other implements has not always proved successful and on many cases, as we have personal experience of some places in U.P., it has often meant false starts on scheme that on paper looked so promising and easy.

The transcendentalist however will not agree with that tractors and other agricultural implements only can solve the problem of grow more food and inadequate living standard. Besides the tractor, implements, the man who will work on the land of cultivation, there is another supreme hand in the successful termination of the productive enthusiasm. This ultimate cause is called “Daiva” or the unseen power of God inconceivable by human brain. This power can ultimately make all things null and void and conquer over all other enthusiasm and ability of the human being. In the Bhagwat Geeta we have this information as follows:—

[Following is the entire verse with Bhaktivedanta Purport, not included in the original BTG article:]

Bhagava-gita As It Is, Chapter 18, Verse 13-14
His Divine Grace A.C. Bhaktivedanta Swami

TRANSLATION
O mighty-armed Arjuna, learn from Me of the five factors which bring about the accomplishment of all action. These are declared in sankyha philosophy to be the place of action, the performer, the senses, the endeavor, and ultimately the Supersoul.

PURPORT
A question may be raised that since any activity performed must have some reaction, how is it that the person in Krsna consciousness does not suffer or enjoy the reactions of work? The Lord is citing Vedanta philosopy to show how this is possible. He says that there are five causes for all activities and for success in all activity, and one should know these five causes. Sankhya means the stalk of knowledge, and Vedanta is the final stalk of knowledge accepted by all leading acaryas. Even Sankara accepts Vedanta-sutra as such. Therefore such authority should be consulted.

The ultimate will is invested in the Supersoul, as it is stated in the Gita, “sarvasy caham hrdi.” He is engaging everyone in certain activities. Acts done under His direction from within yield no reaction, either in this life or in the life after death.

The instruments of action are the senses, and by senses the soul acts in various ways, and for each and every action there is a different endeavor. But all one’s activities depend on the will of the Supersoul, who is seated within the heart as a friend. The Supreme Lord is the super cause. Under these circumstances, he who is acting Krsna consciousness under the direction of the Supersoul situated within the heart is naturally not bound by any activity. Those in complete Krsna consciousness are not ultimately responsible for their actions. Everything is dependent on the supreme will, the Supersoul, the Supreme Personality of Godhead.

To effect successful result in the attempt of agricultural enthusiasm there are five causes namely the situation of the land, the man who works in the field, the instruments or implements applied in the enterprise and above all the hidden hand natural forces, known as Daiva.

Whatever is attempted and done in this world physically or mentally by any man, which may be right or wrong in the estimation of the public, must have all the above mentioned five causes behind the attempt. Nobody should therefore see only the visible causes for effective result but must look into the invisible cause called the Daiva.

Above all other causes the Daiva cause is the most powerful. This Daiva cause or the Supreme cause is the ultimate control of physical nature which is the external energy of Godhead. The land, implements, the worker, the attempt all depend on the ultimate cause called ‘Daiva.’ It is also known as ‘Prakriti.’ Everything is done by the ‘Prakriti’ but egoistic fools think that the work is performed by them. In spite of good tilling of the land and the expert tiller, good tractors or other implements and the most sincere and accurate plan of the work it is quite possible that the whole attempt may be frustrated for want of sufficient rains. Without rains all other arrangement will stand null and void due to the reaction of the Daiva cause. This Daiva cause is made effectively favourable by the process of ‘Yajna’ described elsewhere in this issue.

Along with the creation of the ‘Prajas’ or the living being, the ‘Yajnas’ or sacrifices on account of Vishnu the Supreme Being was also created. By the performance of ‘Yajnas’ the controlling deities, who supply us light, air, heat, water etc. which are all essential factors in the matter of grow more food campaign, are satisfied. By their satisfaction only everything is produced nicely, sufficiently. When there is sufficient production by the mercy of Daiva the inadequate standard of living is mitigated. Otherwise every attempt becomes futile. 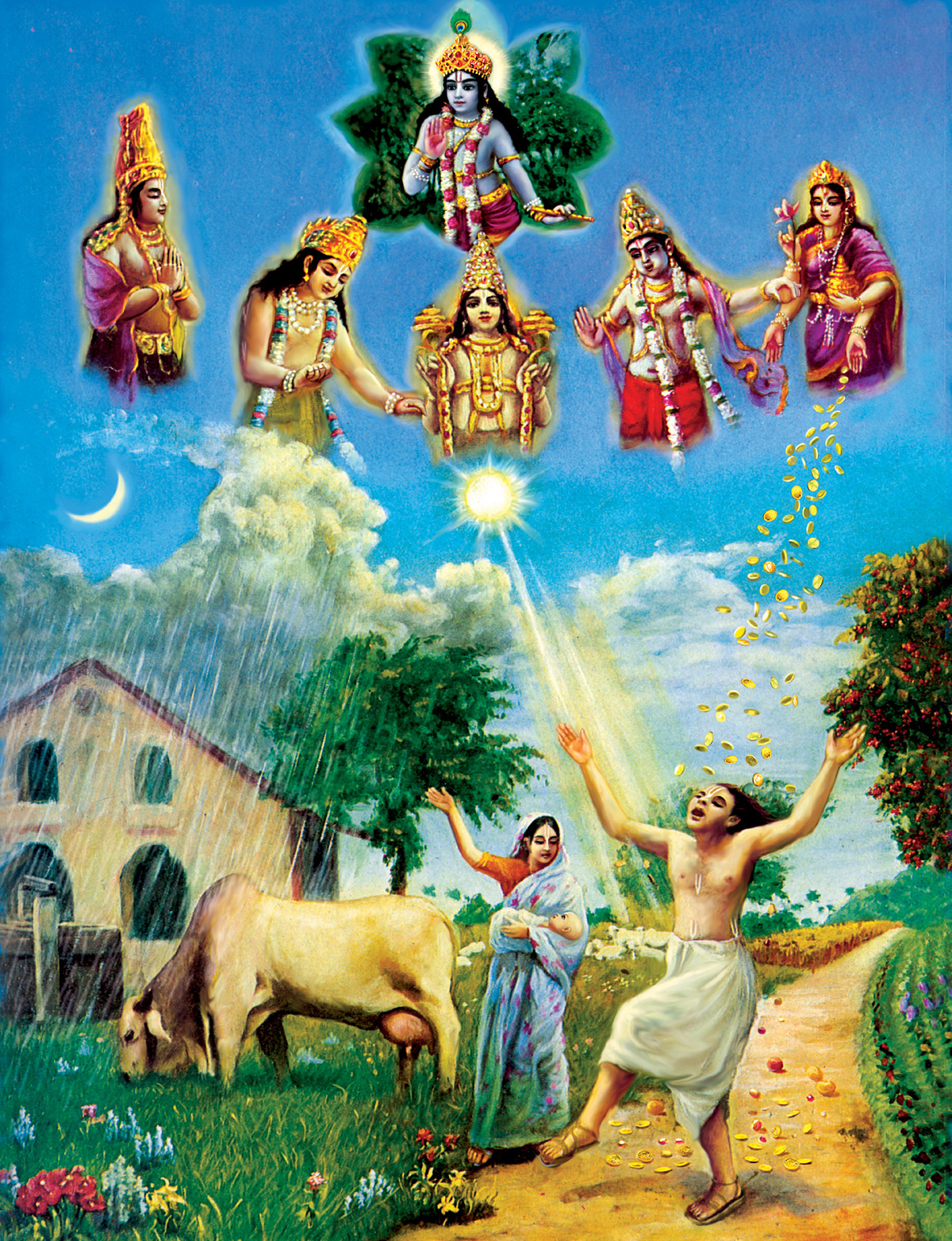