Among Vedic practitioners, Tulasi “The Incomparable One”, is vital in the worship of Lord Vishnu. As Vrinda Devi she arranges the pastimes of Sri Sri Radha Krishna in the forests of Vrindavan. Devotees always offer food to the Lord accompanied by a leaf from Tulasi. In addition, Vaishnavas chant on and wear sacred beads made of her wood, and in some traditions anoint their body with sacred clay in the form of her leaf. 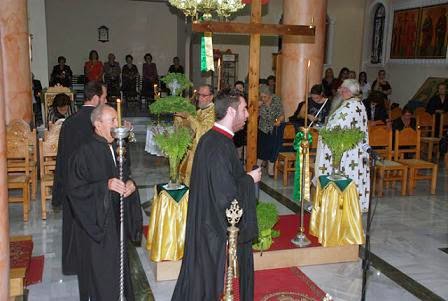 For thousands of years Tulasi was worshipped in India and slowly made its way westward via trade routes linking India to Persia and Greece. Many may not know that Tulasi plays an important role in Orthodox Christianity (including Greek, Bulgarian, Serbian, Macedonian, and Romanian Orthodox Churches).

According to Orthodox tradition when the disciples of Jesus went to the tomb of Christ they found it empty but all around the area were fully bloomed Tulasi. The Greeks called Tulasi ‘Holy Basil’, from the Greek word ‘basileus’ meaning King/royalty for it was reserved for the greatest.

Several hundred years later, Helena, the mother of Emperor Constantine, made a pilgrimage to Jerusalem in search of holy relics. It is said she found a barren hill covered in sweet smelling Tulasi, and upon excavation found the true cross beneath the Tulasi plant. Because Tulasi was discovered both at the cross and tomb of Christ, traditional Orthodox Christians saw it as a symbol of paradise, of spiritual rebirth and sanctity. This is simply one example of the influence of Vedic culture upon the world.