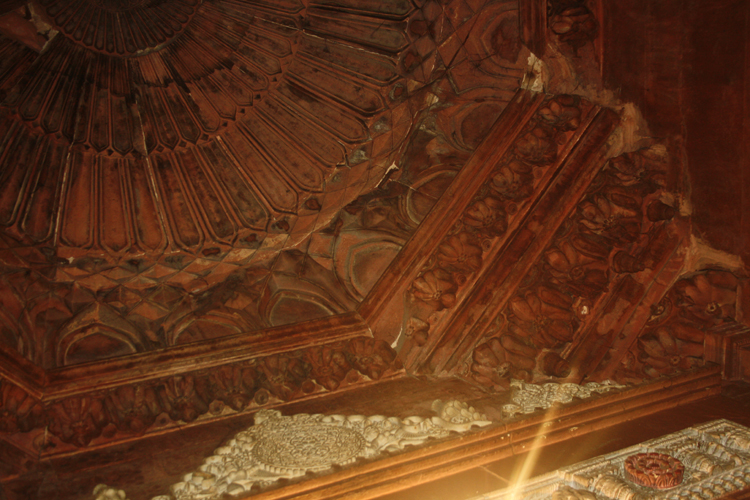 Following two major aftershocks on Sunday afternoon after a series of tremors in the wake of the quake measuring 7.9 on the Richter scale that struck Nepal on Saturday, the devotees and the priests of Vrindavan got concerned about the safety of the architectural heritage temples and buildings of Vraja.

A rumor was spread on Monday that a crack had appeared on the wall of the 16th century Govinda Dev Temple of Vrindavan. On Monday morning the temple priests Shri Sukumar Goswami and Shri Sanjay Goswami expeditiously informed the ASI officials at the regional office in Mathura about the crack in the red sand stone building after the tremors jolted many parts of Vraja on Saturday and Sunday.

Subsequently conservation assistant SK Kulshreshtha, visited the temple and denied that any crack had appeared due to the aftershocks. He said that it was nothing but the joint of two stones, which are intact. Shri S. K. Kulshreshtha said, “We are maintaining the temple in the condition in which we got it. We can’t alter anything, as per the guidelines set by the Archeological Survey of India. We can’t remove those stones which have scratches on them from before. We simply can’t replace them with the new stones.” Later, M.C. Sharma, the Deputy Superintending Archaeological Engineer also visited the protected monument to ensure if the temple remained unscathed by the earth quake.

Govinda Dev Temple is the first temple of Vrindavan, was built in 1590 by Raja Man Singh of Jaipur under the guidance of Shri Rupa Goswami during the reign of Mughal emperor Akbar. There are four protected monuments in Vrindavan, namely Govinda, Madan Mohan, Yugal Kishore and Radha Ballabh. The Archeological Survey of India takes care of the maintenance of these temples.