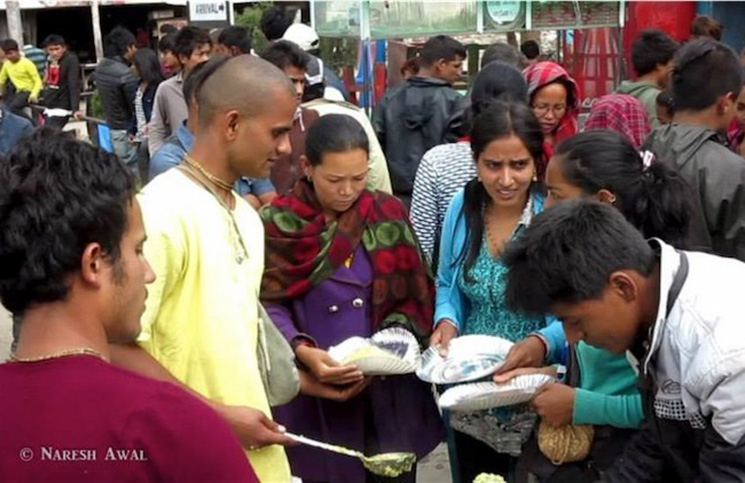 In the aftermath of the earthquake in Nepal, Hare Krishna Food for Life, a program run by ISKCON, has setup relief camps in the capital city of Kathmandu and Bhaktapur to help those affected by the natural disaster. A mini relief camp is also being setup in the town of Panauti, 31 km South-East of Kathmandu.

“The distribution starts early in morning and ends a little after midnight. As the situation unfolds, we expect more people who would need assistance. We are working with the local government officials and are setting up medical camps and shelters. Our team of seven doctors and six paramedics from Bhaktivedanta Hospital in Mumbai have reached Kathmandu today to help the victims” said Patri Dasa, Regional Secretary of ISKCON Nepal.

As per the reports from the volunteers, the consignments consisting food grains along with other basic necessities including clothing, tent equipments and medicines have reached the other two ISKCON Relief Camps to help the people who have taken shelter there.

With severe shortage of man power and resources, food is also being provided to the patients and hospital staff on the request of government agencies. The FFL team has also been organizing food distribution camps in various localities and in Sankhu and other rural places where assistance is urgently needed and transportation is still difficult.

Hare Krishna Food for Life is the world largest vegetarian food relief program. Inaugurated in 1974, the program is today is active in over 60 countries and has been actively involved in relief programs during major natural disasters and conflicts including:

A video report of the situation in Katmandu as of April 27th, 2015:

For those who wish to help ISKCON’s Nepal relief efforts, could contribute online through: http://www.gofundme.com/sy7frjs

If they wish to donate through electronic bank transfer, below are the required details:

(A) If the sender is a citizen of a country other than India:

(B) If the sender is a citizen of India: