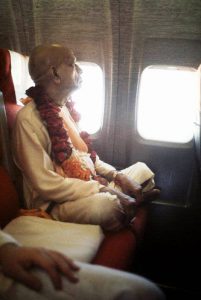 On different occasions Srila Prabhupada spoke about sleep. When I first became his servant, he called me into his room after he had taken a short nap following lunch. This was at the Dallas temple when Srila Prabhupada visited the gurukula facility. He asked me if I had taken rest after eating my lunch. I said no. This was not something that was done at that time.

I had been with Srila Prabhupada only a few days, but his humility had already captured my heart. On another occasion, when he was getting ready to take rest in the evening, he said to me, “Whenever I go to take rest, I think, ‘Now I am going to waste my time.’”

Srila Prabhupada never wasted his time. I was only 20 years old when I was his servant, but I had a difficult time keeping up with him as he traveled around the world enlivening his disciples. He was 75 years old then. Sometimes on his morning walks, his disciples would look at each other, shake their heads and wonder when he was going to go back to the temple because they were getting tired of walking.

During one short flight from New York, many devotees arranged for seats in the same row as Srila Prabhupada. As Srila Prabhupada’s personal servant, I was fortunate to be seated next to him. As the flight progressed, some of his disciples began to fall asleep and do, what I called, “the devotee dive-bomb.” It was quite a sight seeing a row of shaven heads bobbing up and down. Prabhupada was not amused.

“Just see,” he said. “Everyone is wide awake except for the devotees. They are in maya, sleeping. Everyone else is awake. Why they cannot stay awake.”

Usually when Srila Prabhupada addressed me in this way I became silent. I was afraid of saying the wrong thing and possibly disturb him further. I simply sat in silence and waited for him to stop. This was one such instance.

During my stay with Srila Prabhupada, I learned there was no such thing as a good reason. There wasn’t a point you could make that Prabhupada couldn’t defeat, and I was not advanced enough to have him start chastising me on a regular basis. Therefore, I didn’t even try to argue that the devotees only slept a few hours compared to the non-devotees. Prabhupada spent a few more minutes making his point. One thing was certain; I did not sleep on that flight.

Source: What is the Difficulty by Srutakirti dasa