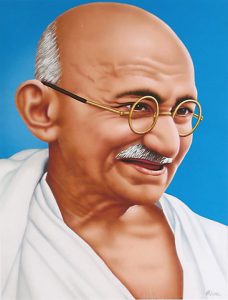 I am your unknown friend but I had to write to you at times and again although you never cared to reply them. I sent you my papers “Back to Godhead” but your secretaries told me that you have very little time to read the letters and much less for reading the magazines. I asked for an interview with you but your busy secretaries never cared to reply this. Anyway as I am your very old friend although unknown to you I am again writing to you in order to bring you to the rightful position deserved by you. As a sincere friend I must not deviate from my duty towards a friend like your good self. I tell you as a sincere friend that you must immediately retire from active politics if you do not desire to die an inglorious death. You have 125 years to live as you have desired to live but you if you die an inglorious death it is no worth.

The honour and prestige that you have obtained during the course of you present life time, were not possible to be obtained by any one else within the living memory. But you must know that all these honours and prestiges were false in as much as they were created by the Illusory Energy of Godhead called the maya. By this falsity I do not mean to say that your so many friends were false to you nor you were false to them. By this falsity I mean illusion or in other words the false friendship and honours obtained thereby were but creation of maya and therefore they are always temporary or false as you may call it. But none of you neither your friends nor yourself knew this truth. Now by the Grace of God that illusion is going to be cleared and thus your faithful friends like Acarya Kripalini and others are accusing you for your inability at the present moment to give them any practical programme of work as you happened to give them during your glorious days of non-co-operation movement. So you are also in a plight to find out a proper solution for the present political tangle created by your opponents. You should therefore take a note of warning from your insignificant friend like me, that unless you retire timely from politics and engage yourself cent per cent in the preaching work of Bhagavad-gita, which is the real function of the Mahatmas, you shall have to meet with such inglorious deaths as Mussolini, Hitlers, Tojos, Churchills or Lloyd Georges met with.

You can very easily understand as to how some of your political enemies in the garb of friends (both Indian and English) have deliberately cheated you and have broken your heart by doing the same mischief for which you have struggled so hard for so many years. You wanted chiefly Hindu-Moslem unity in India and they have tactfully managed to undo your work, by creation of the Pakistan and India separately. You wanted freedom for India but they have given permanent dependence of India. You wanted to do something for the upliftment of the position of the bhangis but they are still rotting as bhangis even though you are living in the bhangi colony.

They are all therefore illusions and when these things will be presented to you as they are, you must consider them as God-sent. God has favored you by dissipating the illusion you were hovering in, and by the same illusion you were, nursing those ideas as Truth(?). You must know that you are in the relative world which is called by the sages as Dvaita i.e. dual- and nothing is absolute here. Your Ahimsa is always followed by Himsa as the light is followed by darkness or the father is followed by the son. Nothing is absolute truth in this dual world. You did not know this neither you ever cared to know this from the right sources and therefore all your attempts to create unity were followed by disunity and Ahimsa. Ahimsa was followed by Himsa. But it is better late than never.

You must know now something about the Absolute Truth. The Truth with which you have been experimenting so long is relative. The relative truths are creations of the daivi maya qualified by the three modes of Nature. They are all insurmountable as is explained in the Bhagavad-gita (7.14. The Absolute Truth is the Absolute Godhead. In the Katha Upanisad it is ordered that one must approach the bona fide Guru who is not only well versed in all the scriptures of the world but is also the realized soul in Brahman the Absolute—in order to learn the science of Absolute Truth. So also it is instructed in the Bhagavad-gita as follows:— tad viddhi praṇipātena paripraśnena sevayā upadekṣyanti te jñānaṁ jñāninas tattva-darśinaḥ (Bg. 4.34) But I know that you never underwent such transcendental training except some severe penances which you invented for your purpose as you have invented so many things in the course of experimenting with the relative truths. You might have easily avoided them if you had approached the Guru as abovementioned. But your sincere efforts to attain some Godly qualities by austerities etc surely have raised you to some higher position which you can better utilize for the purpose of the Absolute Truth. If you, however, remain satisfied with such temporary position only and do not try to know the Absolute Truth, then surely you are to fall down from the artificially exalted position under the laws of Nature. But if you really want to approach the Absolute Truth and want to do some real good to the people in general all over the world, which shall include your ideas of unity, peace and non-violence, then you must give up the rotten politics immediately and rise up for the preaching work of the philosophy and religion of “Bhagavad-gita” without offering unnecessary and dogmatic interpretations on them. I had occasionally discussed this subject in my paper “Back to Godhead” and a leaf from the same is enclosed herewith for your reference. I would only request you to retire from politics at least for a month only and let us have discussion on the Bhagavad-gita. I am sure, thereby, that you shall get a new light from the result of such discussions not only for your benefit but for the benefit of the world at large—as I know that you are sincere, honest and moralist. Awaiting your early reply with interest. Yours sincerely, Abhay Charan De Enclosure—one leaf from Back to Godhead