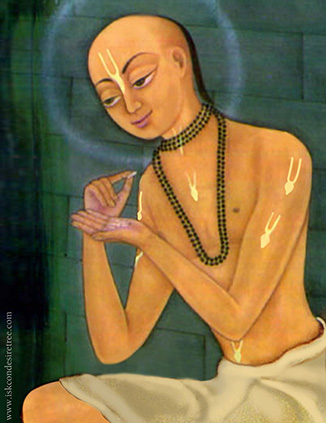 He no more invites Chaitanya to dinner

For two years Raghunatha continued inviting Chaitanya to this humble repast, but at the end of two years he discontinued it. A month passed and Chaitanya did not receive any invitation from Raghunatha and when the next month passed also Chaitanya asked Svarupa: “Why is it that Raghu does not invite us any more?” Svarupa told the Master that Raghu would not further accept any money from a worldly man. This could not, he was convinced, give any satisfaction to the Master, though the latter accepted the invitation for the sake of mere courtesy; so he had dispensed with it. Chaitanya said: “Raghu has understood aright. It is even so; acceptance of a gift from a rich man makes the life of an ascetic poor spiritually. It spots his clear vision of God.”[11]

Chaitanya however made enquiries of Svarupa about the physical needs of Raghunatha, though he did not like any one to make any provision for him. A Sannyasi must absolutely resign himself to God, without thinking of the morrow. Whatever Raghunatha did, he did with an inward strength and joy, which raised him above all human compassion. Through his spiritual and physical needs, however, the mother-like eyes of the Master followed him at every step watching with keen interest his progress in spiritual life.

Chaitanya one day heard that Raghu no longer stood at the gate of the Temple for alms, but he gathered a handful of scraps and rice thrown outside the courtyard of the Temple, which he washed carefully, and took with a little salt. Yet he was as cheerful as ever.

Thus did Raghunatha spend 16 years of his life at Puri. He came there when he was only 19, and now at his 35th year, Chaitanya passed away from this world. Raghunatha had once said to Chaitanya:

“Of what other God you speak to me, Master? You are my God.”

When the great calamity took place, Raja Pratapa Rudra, who had already made over the helm of administration, and all marks of royalty to his son, retired from Puri to village life in deep sorrow and spent his remaining days in calling to mind the incidents of Chaitanya’s life.

Many of Chaitanya’s companions left Puri; for they had not seen God in the image of the Temple there so much as in the Man before them, and their grief was now overwhelming. Raghunatha carried the stone which Chaitanya had given him for worship together with a string of sacred Goonja-heads to Vrndavana, and at the moment of worship he bathed them every day with his tears, remembering the kindness of their giver.

Raghunatha lived till a good old age dying in his 80th year in 1584 A.D. His last hours are thus described in the Padakalpataru:

“On the bank of the Radha Kunda he lay breathing heavily. He could speak no word, and his closed eyes shed a few drops of tears indicative of the joy of union with Krsna.”

Raghunatha’s name is inseparably associated with those of Rupa and Sanatana, who had become his most intimate friends at Vrndavana. There the ascetic-prince earned the admiring love and esteem of the Vrajabasis by his faith and pure unspotted life. He wrote many Sanskrit works which will be enumerated below. He was innocent and simple as a child. And his sinless mind mirrored in its unsullied transparence the glories of a true spiritual life.

In the last part of life he lived upon whey only and often slept under the canopy of the sky which showed him far greater splendour than the ornamental roof studded with jewels of his father’s palace at Saptagrama.

Some of the songs on Radha and Krsna that he composed contain invocations to Tungadevi, Rangadevi, Lalita, Bisakha and other Gopis of Vrndavana to teach him how to decorate the God whose vision he saw; for they were finished mistresses of the art. In one of them he addresses the Deity saying:

“I am thine – I am thine alone for ever. Take me to thyself.”

This was a short time before his death. One of his constant companions in the latter part of his life was the venerable Krsnadasa Kaviraja who was inspired to write his Chaitanya Charitamrta, on hearing an account of the great life of the Master, recited for the most part by Raghunatha. At Vrndavana we find him receiving some of the later Vaisnava worthies such as Srinivasa and Syamananda with kindness, and paying his respects to Jahnavi Devi, wife of Nityananda when she visited the holy city.

He is one of the few Kayasthas who were admitted to Brahmanhood in the Vaisnava society of Bengal, being recognised as one of the six Gosvamis. But to Raghunatha Brahmans, Kayasthas and even the lowest castes as Hadis commanded the same respect. For following the instructions of Chaitanya, he had learnt “to respect every living being knowing that the holy God dwelt in every one.”