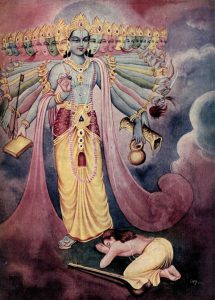 The Bhagavad-gita is one of the world’s perennial wisdom texts. Because it offers knowledge of the Absolute Truth, some of its texts can be difficult to understand. Few are as difficult as verses four and five of Chapter Nine: “By Me, in My unmanifested form, this entire universe is pervaded. All beings are in Me, but I am not in them. And yet everything that is created does not rest in Me. Behold My mystic opulence! Although I am the maintainer of all living entities and although I am everywhere, I am not a part of this cosmic manifestation, for My Self is the very source of creation.”

What is Krishna saying here? First of all, He says that in His unmanifested form (avyakta murti, or Brahman) He pervades the universe. Clear enough: God is all-pervading. Then Krishna says that all beings are in Him. Okay, if He’s everywhere, then all beings exist in Him. No problem. But then it gets somewhat perplexing: He says He is not in them.

This is the beginning of the difficult part. Anyone who has even casually studied the Gita—particularly Srila Prabhupada’s Bhagavad-gita As It Is—knows that God is in everything as the Supersoul, known in Sanskrit as the Paramatma. So what does Krishna mean by saying “I am not in them,” when His presence in everything is confirmed throughout the Vedic literature?

After He disavows his presence in all beings, He says that everything does not rest in Him. This is in stark contradiction to His statement in the previous verse, wherein He boldly declares the opposite. Even Baladeva Vidyabhushana, the renowned eighteenth-century Gaudiya Vaishnava commentator, asserts that this is a contradiction and that a serious student of the Gita must ask, “How might one resolve it?”

Indeed, Baladeva suggests that when Krishna says “Behold My mystic opulence” (pashya me yogam aishvaram), He is attempting to resolve the contradiction. Baladeva admits, however, that this is not resolution in any true sense but rather a proclamation that human words cannot actually explain the Lord: God has inconceivable potency (acintya-shakti).

Clearly, God is not bound by our mundane sense of logic. He is the creator of logic and, as such, transcends it. Thus, He is the Lord of paradox. According to the dictionary, a paradox is a seeming contradiction that is nonetheless true; it is something that exhibits inexplicable or contradictory aspects. Here’s an example from the poetess Mary Shelley: “The silence of midnight, to speak truly, though apparently a paradox, rung in my ears.”

We encounter a particularly glaring example of Krishna’s paradoxical nature in the Sri Ishopanishad (Mantra 5): “The Supreme Lord walks and does not walk. He is far away, but He is very near as well. He is within everything, and yet He is outside of everything.” Srila Prabhupada explains in his commentary:

But the two Gita verses in question are more than mere proclamations of God’s inconceivable potency. Let us look at these verses more closely.

By the term “unmanifested form” (avyakta-murti), Krishna explains that although He is ever present, we cannot see Him with our gross senses. Srila Prabhupada’s commentary illuminates this idea by way of a verse from the Padma Purana, averring that because Krishna’s form, qualities, and pastimes are all of a spiritual nature, material senses cannot perceive them. But Prabhupada quickly adds that when a soul in the grip of the material energy is awakened to Krishna consciousness, full understanding and perception of Krishna gradually come to the fore.

In this initial verse, Krishna tells us of His simultaneous transcendence and immanence: He is removed from matter and at the same time exists as its very basis. He referred to this complex relationship earlier in the Gita (7.4–5). He is removed from material world, although it rests on His energy. He is the source of the material world, and He maintains it, but He is not dependent on it, nor does it affect His essential nature. He is free from material nature, but material nature is not free from Him.

This squares well with the commentary of the great tenth-century teacher Ramanuja, who writes that 9.4 can also read as follows: “All beings are supported by Me, though I am not supported by them.” No contradiction there.

In this way the commentaries of the great acharyas explain 9.4. But then we have 9.5: “And yet everything that is created does not rest in Me.” A clear contradiction, as Baladeva Vidyabhushana has noted.

There is an easy way to understand this. Krishna is reminding us here of His transcendence. Although everything rests in Him, at least in the sense that everything is dependent upon Him, He is fundamentally aloof, existing in His own abode, beyond the material world. In his purport, Prabhupada evokes the image of Atlas, who, lifting the world on his shoulders, seems tired, as if he can accomplish his task only with great struggle. Krishna is not like that, Prabhupada tells us. Rather, Krishna’s involvement in the material world does not strain His energies one iota. In fact, He engages with matter through His manifestations as Brahman and Paramatma, leaving His original form free to enjoy transcendental activity in the spiritual world.

To help us understand His inconceivable and mystical relationship with the material world, the Lord offers an analogy in the next verse (9.6), and here we might find at least partial resolution to the dilemma: “Understand that as the mighty wind, blowing everywhere, rests always in the sky, all created beings rest in Me.” In other words, Krishna is the backdrop that gives meaning to reality. He is like the thread that gives cloth its form and substance.

Change cannot be perceived without the background of changelessness. A mirage has no meaning if there’s no desert backdrop. A movie cannot be seen without a movie screen. And without sky, the wind would have nowhere to blow. In the same way, though Krishna is totally aloof—He is not in all beings and all beings are not in Him—He is very much here as well, fundamentally connected to everyone and everything as their very basis.

Baladeva Vidyabhushana’s spiritual master, Srila Vishvanatha Cakravarti Thakura, raises a question that might serve as an addendum to the question of Krishna’s inconceivability as expressed in these verses: Since Krishna has explained, both by analogy and by describing His acintya-shakti, or inconceivable potency, how these Bhagavad-gita verses might be understood, has He not already resolved the dilemma? Hasn’t His explanation made the inconceivable conceivable? “If so,” Vishvanatha writes, “then how is the Lord’s mystic power inconceivable, which He Himself claims it is by saying ‘Just see My mystic opulence’? After all, we now have a conceivable way of understanding His mystic power.”

Vishvanatha Cakravarti then answers his own query: “The example of the sky is offered to give ordinary people an opportunity to begin to understand this subject.” The operative word here is “begin.” Without doubt, the subject of God and His inconceivable potencies is just that—inconceivable. All we can hope for is a hint, a taste, of that inconceivable truth. Indeed, Krishna says that one can know Him as He is only by unmotivated devotional service (11.54). And even then, we can know Him only to the degree that He chooses to reveal Himself.

In conclusion, let us say that, without doubt, the verses in question can be understood in a simple and straightforward manner. After all, Krishna is clearly making a distinction between His manifestation as Brahman, or as an all-pervading force, and His underlying form as Bhagavan, the Supreme Personality of Godhead. By His impersonal manifestation and His expansive energy He pervades the cosmic creation. This is what He’s saying toward the beginning of these verses. But He still remains aloof—this is His way of pointing out that His all-pervasiveness does not co-opt His transcendent personality, the very source of creation.

Prabhupada alludes to this in his purport, when he says, “The planetary systems are floating in space, and this space is the energy of the Supreme Lord. But He is different from space. He is differently situated.” So everything is in God’s energy, which is an aspect of His self-existent nature, but everything is not in Him as Bhagavan, the Personality of Godhead, who is totally “other.”

Though these verses can be understood in this way, in an ultimate sense they allude to the greater mysteries of God’s nature, and therefore Baladeva Vidyabhushana acknowledges their contradictory status. If one contemplates such mysteries under the guidance of a teacher in Krishna consciousness, great truths will gradually unfold, and Krishna will be revealed in His fullness.

Source: Back to Godhead magazine