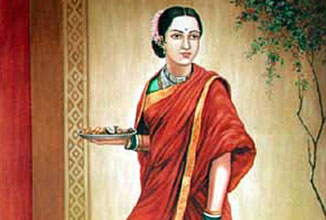 The following story, adapted from the thirteenth chapter of the Nrsimha Purana, illustrates the negative effects of pride and the power of a chaste lady.

SPECIAL POWER
There was once a righteous brahmana named Kasyapa. He had mastered all of the scriptures and was expert in explaining them. Disinclined to performing another’s duty, he was daily absorbed in the worship of Lord Narasimha and was always engaged in performing yajna. Every morning and evening he would offer oblations into the sacred fire and he would always show proper hospitality to the brahmanas and guests at his residence.

His wife was named Savitri. She was a high-minded lady, was honored for her virtue, and she led a spotless life in service to her husband. Due to her chastity and devotion she was endowed with the power of knowing things beyond the range of the senses.

GREAT BRAHMACARI
There was also a wise brahmana named Yajnasharman living in the land of Koshala. He had a devoted and religious wife named Rohini who was endowed with all auspicious features and an unblemished character.

After some time Rohini gave birth to a son. Yajnasharman performed all of the recommended purificatory ceremonies for his son as described in the Vedas. The boy was named Devasharman. When he was eight years old his father performed his sacred thread ceremony and engaged him in study of the Vedas.

After Devasharman had mastered the Vedas his father died.

At the death of Yajnasharman, both the son and the mother were grief-stricken. Devasharman performed the funeral ceremonies for his father according to the instructions of saintly persons, and then he decided to travel to different places of pilgrimage. Devasharman’s fame as a great brahmacari gradually spread far and wide. He had no residence and was always wandering from one place to another. Maintaining himself by begging alms, he was always chanting Vedic mantras and performing sacrifices. Meanwhile, with her husband dead and her only son living as an ascetic, Devasharman’s mother Rohini had no means of support and was suffering terribly.

BURNT TO ASHES
In the course of his wanderings, one day Devasharman came to the bank of a river, where he took bath. Spreading his cloth on the ground to dry, he sat in meditation. Just then, a crow and a crane came and suddenly flew away with his cloth. Seeing this, Devasharman became angry and shouted abuses at them. The birds then dropped the cloth on the ground, passed stool on it, and flew away. Devasharman looked at them with wrath, and immediately the birds burned to ashes. Surprised to see this, Devasharman concluded that there was no one in the world equal to him in penance.

Proud of the strength of his austerity, Devasharman left the river to seek alms at a nearby village. He came to the house where the devoted wife Savitri and her husband Kasyapa lived. Devasharman came to their door and requested Savitri to give him alms. However, Savitri was just then serving her husband his mid-day meal. Although she saw Devasharman at the door, she remained silent and attentive to her husband. After her husband had eaten, she washed his feet with warm water. Only then did she come forward to offer alms to the brahmacari.

Having been made to wait for so long, Devasharman was very angry. He glared at the devoted housewife again and again with red-hot eyes. Seeing his conduct, Savitri laughed and said, “O furious sage! I am not the crow or the crane that fell down dead on the bank of the river by the strength of your anger. If you want to accept alms from me you will have to behave properly.”

Collecting the alms given by Savitri, Devasharman quietly left that place.

Walking back to the river, he again and again thought in his mind, “How it was that she had come to know of the death of the crow and the crane?” Leaving his begging bowl by the river, Devasharman returned to the village.

After the devoted Savitri had finished her meal and her husband had gone out, the brahmacari came to her residence and said, “O blessed woman, please tell me how you acquired this mystic power of knowing things beyond the senses?”

SAGACIOUS ADVICE
That virtuous and devoted woman Savitri replied, “O brahmana, please listen attentively to the answer to this question. The mystic power that I possess is the result of careful and consistent observance of the prescribed duties of a chaste wife. Service to one’s husband is the established duty of women.

O high-minded one, I have always followed that duty. Indeed, I know nothing else. I have acquired this power because day and night, without questioning, I have given complete satisfaction to my husband, waiting upon him with love and devotion.

“If you are interested to listen, I will tell you something else. Your father was a brahmana who lived on alms. You took lessons from him on the Vedas. When he died you performed his funeral ceremonies. Then, ignoring your aged and widowed mother, you came here. That poor wretched woman is now without any support while your sole interest is only to feed yourself! Your mother bore you in her womb. After you were born she nurtured you and brought you up with all love and affection. She did everything for you including cleaning your stool. You have deserted her and have been practicing austerities in the forest. O brahmana, aren’t you ashamed? What do you hope to gain by wandering about in the forest?

“Because of the suffering of your mother a bad odor is coming from your mouth. Whatever strength and power you have is only due to your father, who performed various samskaras in your life.

“O evil-minded sinner! Just recently, for no reason, you have burnt to death two innocent birds. As a result of this all of your sacred baths, your visits to different holy places, and all your meditation and sacrifices have been in vain. O brahmana, that person who sees their mother in a poor and wretched condition lives in vain, whereas he who is full of regard for his mother and who always protects her with devotion gets all rewards in this world and hereafter.

“You should immediately go to your mother and save her life. Her protection is your highest penance. Give up your anger, for it destroys all merits accumulated in this world and in the next. You should atone for the sin of killing the birds. O brahmacari, what I have spoken to you is correct. If you are interested in ultimate happiness you should follow my advice.”

Having thus advised the son of the brahmana, the devoted wife fell silent.

Devasharman then said to Savitri, “O blessed lady, please forgive me for the harm I have done to you by looking at you in anger. You have told me what is good for me. O righteous lady, after returning to take care of my mother, what duties shall I perform to attain the supreme goal?”

TRIDANDI SANNYASA
The devoted wife Savitri replied, “Listen carefully. I shall now tell you the duties that you have to perform. You should maintain your mother by begging, and you should also perform the prescribed atonement for the sin of killing the two birds.

“In the land of Kosala there is a girl born in a brahmana family who is destined to be your wife. When you return home her father will offer her to you. You should accept her at that time. She will give birth to a baby boy who will perpetuate your family.

“With the passing away of your wife you should take up the order of tridandi-sannyasa. Provided you sincerely follow the disciplines of the sannyasa asrama, then by the grace of Lord Narasimhadev you will certainly attain the abode of Lord Vishnu.

“Because you have inquired from me I have prophesized all of these things.

If you do not have faith in my words then you may do as you like.”

The brahmana Devasharman said, “O devoted wife, I will immediately return to take care of my mother. O auspicious one, when I reach there I will do everything according to your advice.”

Having said this, Devasharman at once started for his home. There, free from anger and delusion, he maintained his mother with all care. He got married and was blessed with a son. When his wife passed away he took up the life of a wandering mendicant. He treated pebbles, stones, and gold on an equal level and by the grace of Lord Narasimhadev he attained the spiritual abode of the Lord.

One may ask how it was that the brahmacari was obliged to maintain his aged mother? Since he had devoted himself to religious pursuits and was strictly following the vows of brahmacarya, would he not be free from this obligation as per the following injunction of Srimad Bhagavatam 11.5.41?

“Anyone who has completely given up all worldly relationships and has taken absolute shelter of the lotus feet of the Lord, who gives us salvation and who alone is fit to be taken shelter of, is no longer a debtor or servant of anyone, including the demigods, forefathers, sages, other living entities, relatives, and members of human society.”

It should be noted, however, that this injunction of the Bhagavatam applies only to those persons who have taken full shelter of the Lord. Although the brahmacari Devasharman appeared to be living a highly pious life, his activities were still on the material platform. His objective was material piety through performing religious activities and visiting places of pilgrimage. He had not left home in pursuit of the Supreme Lord, nor had he sought out the association of transcendentalists, nor had he taken shelter of a bonafide spiritual master. Although he considered himself to be free from obligations to this world, because his pursuits were only external it was improper for him to abandon his religious mother.

Since his activities were still on the material platform, the only fruit he received from them was an increase in his false prestige. This pride developed into anger, which then impelled him to kill the two birds.

If those possessing karma-adhikara do not follow the principles of varnasrama-dharma then they become implicated in sin. For this reason the chaste and omniscient housewife advised him to return home.

“As long as one is not detached from fruitive activity and material enjoyment, and as long as one has no faith in devotion to Krishna, beginning with the process of hearing and chanting His glories, one has to act according to the religious principles of karma or varnasrama.”

In the next chapter of the eleventh canto Krishna again says (11.21.2):

By acting according to his position in the Vedic system of varnasrama dharma, Devasharman gradually developed genuine detachment. He then took to the order of sannyasa and in the end achieved the spiritual abode of the Lord.