Q. I have heard that Krishna’s sister Subhadra is a form of Laxmi Devi, the goddess of fortune and consort of Narayana. Is this correct and can you tell me more about her?

A. Regarding Krishna’s sister, she is named Subhadra and thus her name indicates that she is active in two realms. Bhadra (auspicious) refers to her presiding over the material energy, as demonstrated when she exhibited this form to Kamsa (Bhadra Kali). Su (very) refers to her higher side as a form of Yogamaya, in which she presides over Krishna lila by making very auspicious arrangements to facilitate the will of Sri Krishna.

In the lila she married Arjuna. In terms of her representing the goddess of the material energy, she is Siva’s consort. As Yogamaya behind the scenes in Krishna lila, she is unmarried. Purnamasi and Vrinda-devi are her overt manifestations in the Vraja lila and neither of them are really married (as portrayed by Sri Jiva Goswami). To identify her with Laxmi is a bit of a stretch, but she is a goddess and she does bring good fortune.

Q. What is the connection between Krishna’s consort Srimati Radharani and Vrinda devi (Tulasi)?

A. Sri Jiva Goswami describes Vrinda devi as a forest nymph named Vrindarika, known by the nickname “Vrinda.” Purnamasi introduced her and Madhumangala to Krishna one after the other. As she placed Madhumangala’s hand in Krishna’s hand, Purnamasi told Krishna to keep the company of Madhumangala and thus make his life auspicious. Understanding that Madhumangala would bring the essence of joy to his lila, Krishna looked carefully at him and then embraced him sealing their eternal friendship. Vrinda was introduced and ordered by Purnamasi from that day forward to move about in service to Krishna at all times with great attention. Krishna then garlanded Vrinda and felt greatly encouraged by the prospect of her participation in his life.

Vrinda is possessed of affection and love for both Radha and Krishna, but Sri Rupa Goswami describes her as one of Krishna’s gopi messengers. She is well acquainted with the sacred geography of Vraja and overall her service is similar and related to that of Yogamaya. She is sometimes referred to as Krishna’s “lila shakti.”

Q. The Srimad Bhagavatam describes Krishna’s pastimes with the cowherd girls (gopis) and in one place says that Krishna’s brother Balarama was romantic with the gopis as well. The text reads as though Krishna and Balarama were involved with the same gopis but the commentary to verse 10.65.17, which cites Sridhara Swami, Jiva Goswami, and Visvanatha Cakravarti Thakura, states that this was not the case.

The question I have is why couldn’t Balarama, being an expansion of Krishna and thus the same divine person (God), also enjoy pastimes with Krishna’s gopis? Krishna and Balarama are one, so what could be wrong with this? Couldn’t the acaryas have commented as they did simply because an uninitiated reader of the Bhagavatam might consider it improper for Krishna and Balarama to be romantic with the same gopis?

A. Balarama is an expansion of Krishna, so in this sense they are one, but this does not override the fact that the two are emotionally different. Their emotional difference is vital, as Krishna’s play (lila), fueled as it is by divine love/bhava, thrives on difference. The bheda, or difference, in Sri Caitanya’s metanarrative of acintya bhedabheda (inconceivable simultaneous oneness and difference) gives rise to lila. Thus Balarama is not one with Krishna in the sense that in his absence Balarama can substitute for him as Radha’s lover. Indeed, Balarama is respected by Radha as Krishna’s elder brother so she is not even romantic with Krishna in Balarama’s presence out of deference to him.  Thus knowing the truths that govern rasananda—rasa-tattva—the Goswamis have pointed out how the Bhagavatam does not say what it may appear to say on its surface. The Goswamis are revealing the feeling of the text as they understand its implications even better than its author Vyasa did—vyaso vetti na vetti va.

However, the text of the Bhagavatam itself depicts the relationship between Balarama and Krishna’s gopis as mutually reverential, rama-sandarsanadrtah. This is quite different from the spirit of their relationship with Krishna, and it prohibits the possibility of an intimate relationship between Balarama and Krishna’s gopis, who by love’s law were already married to Krishna. As for the paramour nature of their relationship with Krishna, there is no question of complicating it further by putting Balarama in the mix!

Earlier Krishna sent Uddhava to represent him and deliver a message to the gopis, but Uddhava had no experience of Vraja bhakti. Thus he could not convey Krishna’s heart to the Vraja sundaris. He explained philosophy to them and became bewildered by their bhava, srutibhir vimrigyam. As they unpacked the actual significance of Krishna message that Uddhava delivered, he himself became unglued by its implications. Thus after seeing what happened to Uddhava, Krishna sent Balarama to speak to the gopis to make sure that his heart message was conveyed. Balarama is most faithful to Krishna, and Balarama knows Krishna’s heart much better than Uddhava does. Balarama is a Vrajavasi, and therefore he knows what Vraja bhava is.

Thus Balarama expressed Krishna’s heart to the gopis and pacified them with the assurance that Krishna would return in a week’s time. His relationship with Krishna’s gopis is one of representing his brother faithfully, as Lakshman represented Ramachandra and never imagined enjoying Sita himself. After delivering Krishna’s message and pacifying the gopis to an extent, Balarama, following Krishna’s order to him before he left Dvaraka, pursued the marriage of another group of younger gopis who did not participate in rasa lila with Krishna. After getting the permission of the elders, Balarama married them without an overt celebration due to Krishna not being present to participate, his greatest joy being the pleasure of his younger brother, in separation from whom Balarama is not entirely himself. Balarama’s gopis are the gopis Krishna refers to in his eulogy of Balarama in the Bhagavatam‘s tenth canto, kurvanti gopya iva te priyam iksanena. Balarama danced with these gopis earlier in the springtime during Holi celebrations when Krishna killed Sankhachuda.

Balarama’s relationship with his gopis is one of maryada, not raga. The raga of Balarama is his sakhya reality, his friendly love for Krishna. He is Krishna’s best friend, and it is this higher aspect of Balarama that the Goswamis have focused on and opened a window to for all of us to view. This view shows Balarama in the best possible light. If we are to pursue love of Balarama, we shall pursue love of Krishna-Balarama, sambandhanuga raganuga bhakti.

There is no kamanuga with Balarama as there is with Krishna. He does not directly participate in parakiya-bhava. The secrets of his marriage to other gopis related above aside, his principal wives known to all are Revati and Vasudha in Dvaraka. He is well known for his marriage to these two. And again, this is not parakiya or kamanuga. It is ruled by maryada.

While it is true that Balarama manfests his sakti as Ananga-manjari, the younger sister of Radha, Ananga-manjari is not Balarama’s consort in Vraja. He is one with her in tattva in as much as sakti and its source saktiman are one, but the two are very different in bhava. Radha and Krishna are also one in this sense, but they are more importantly different. If they were not different but rather one in all respects—if Krishna as Radha (his sakti) fully tasted the mahabhava of parakiya—there would be no need for Sri Caitanya. Therefore, in Nityananda Rama’s lineage it is only Jahnava, a representation of Ananga-manjari in Gaura lila, who distributes parakiya-bhava, while Nityananda Rama himself distributes sakhya rasa. That said, it is of course also a fact that no one can taste parakiya-bhava without the blessing of Nityananda Rama—ara kabe nitaicand karuna karibe samsara vasana mora kabe tuccha ha’be. 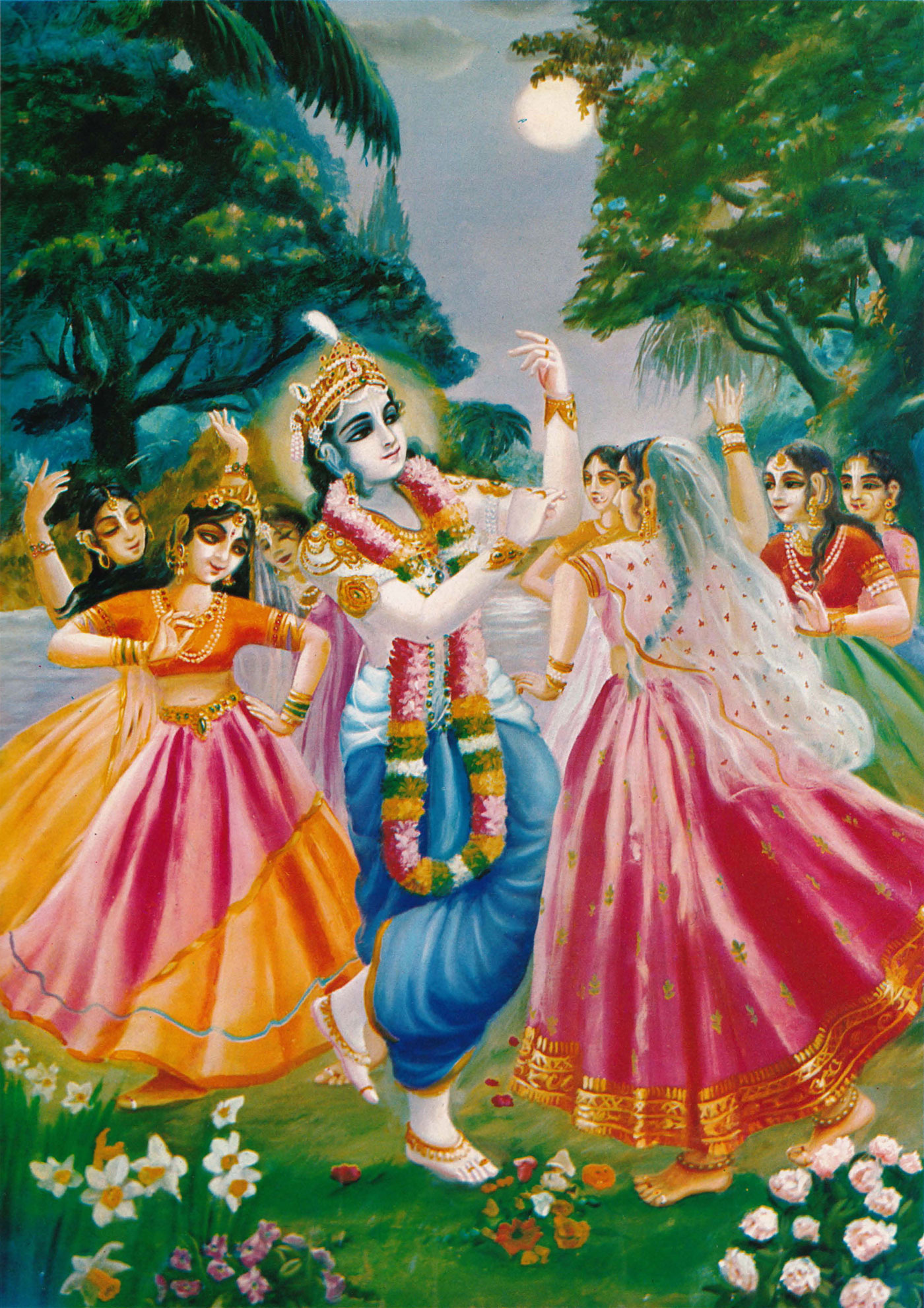