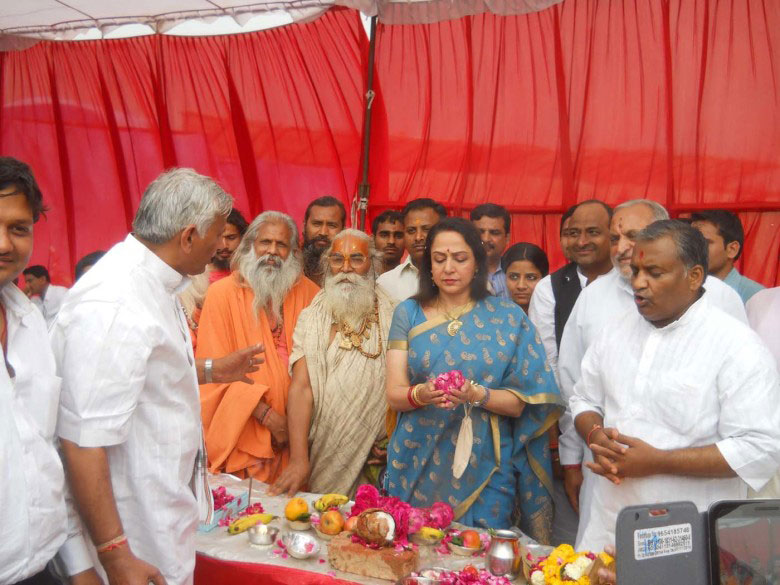 As a first step in organizing the two days event of the ‘Mathura Mahotsava’, ‘Bhumi pujan’ ceremony was conducted by Hema Malini on Sunday. The mega cultural event will take place on 11 -12 April at the proposed Chandrodya Mandir campus. Amid chanting of shlokas priest Shri Vijay Kishore Mishra administered the rituals of the ‘Bhumi Pujan’ to the cinestar turned politician. The site of the upcoming event is being transformed into a traditional Vraja village under the direction of Nitin Desai. The preparations for the event have begun in full swing.

Hema Malini said, “Many cultural events are conducted in Vrindavan and Mathura, as Vraja is very rich in its culture. But my desire was to conduct a grand event to attract the attention of the world to this spiritual destination. This event will give a boost to the tourism industry. The whole idea of organizing this event is to promote the Vraja tourism, which will eventually strengthen the local economy.”

She further said, “Different sets are being prepared based on the Krishna Lila pastimes. These sets will remain for few days even after the event is concluded on 12th April. This event will help the audience to realize the original swaroop of Vraja Bhumi and enjoy the Vraja culture.”

“The event will provide a platform to propagate the Vraja culture. A big number of bollywood actors are coming for the first time in Vrindavan to perform in this event. All the performances will be based on the Krishna lila pastimes only. Bollywood superstar Amitabh Bacchan, who is presently in Singapore, is being contacted to participate in the event,” added Hema Malini, who is the Member of Parliament from Mathura.