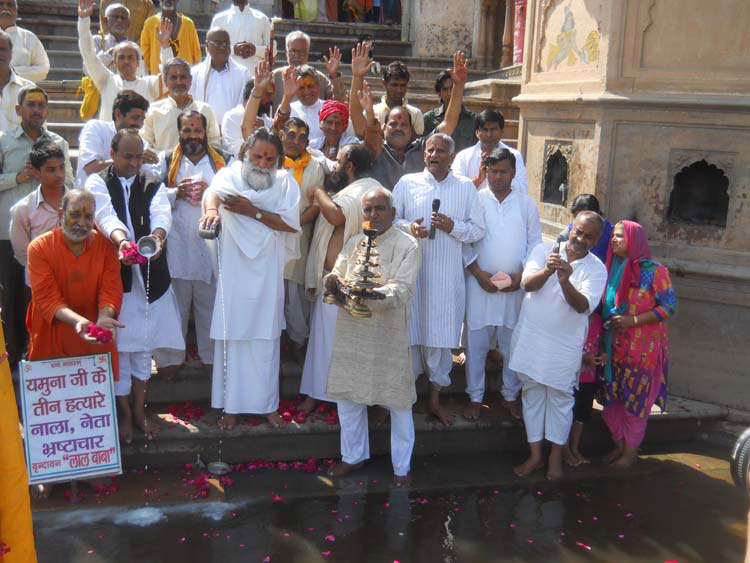 Amid the protests to bring back the pure Yamuna water to Vraja, the Yamuna Jayanti was celebrated in Vraja. The devotees pledged to fight for the cause of Yamuna till their last breath.

Yamuna Chhath, the appearance day of the Goddess Yamuna was celebrated on Wednesday (25th) in the towns and villages of Vraja where the Yamuna River flows. Yamuna Jayanti marks the day when goddess Yamuna descended on the Earth. It is celebrated on Shukla Paksha Shashthi in the month of Chaitra during Navratri.

Goddess Yamuna, being wife of Lord Shri Krishna, is revered by people of Vraja. This day is celebrated as Yamuna Jayanti. Hundreds of devotees of Yamuna gathered in the different ghats of the river Yamuna in Mathura, Vrindavan and Gokul under the auspices of various organizations.

The devotees decorated the bank of Yamuna by lighting scores of earthen lamps and candles. Maha-aratis with as many as 551 lamps were also performed on the banks of Yamuna. The festivity began with the devotees taking bath in the river then performing the dughdhabhishek (offering milk to the river).

A group of two hundred and fifty one women carrying the sacred pitchers ‘Mangal Kalash’ on their heads walked to Yamuna bank from Shri Krishna Janmabhumi to pledge a clean Yamuna after performing the rituals. Meanwhile, a Chunri Manorath was also carried out in Vishram Ghat. This particular ritual consists of stretching saris across the Yamuna in boats as an offering to the goddess. The devotees adorned sari to the mother Yamuna by carrying out chunri manorath.