Observing the beauty and hearing the sweet words, Srila Puri forgot all hunger and thirst. He asked, ‘Who are you? Where do you reside? How did You know that I am fasting?’

The Cowherd boy replied,’ I am a cowherd boy, I reside in this village. In My village, no one fasts. In this village a person can beg food from others. Some people drink only milk, but if a person does not ask anyone for food, I supply him all eatables. The women who come here to take water, saw you, and they supplied Me with this milk and sent Me to you. I must good soon to milk the cows, but I shall return and take back this milk pot from you.’

Boy left and suddenly could not be seen. Srila Madhvendra Puri’s heart was filled with wonder. He drank the milk, washed the pot and kept it aside. He waited for the boy, but He did not return.

He could not sleep and sat while chanting Holy Name of Supreme Lord. Eventually he dozed off.

He had a dream.

He saw the same boy. The boy came before him and holding his hand,took him to a bush in the forest. The body pointed Srila Madhaendra Puri towards a bush and said, ‘I reside in this bush, and because of this I suffer very much from severe cold, rain showers, winds and scorching heat. Bring the people of the village and get them to take Me out of this bush. Then situate Me nicely on the top of the hill. Construct a temple on top of that hill. Install Me. Bathe me with large quantities of cold water so that My body is cleansed. For many days I have been observing you, and I have been wondering, ‘When will Madhavendra Puri come here to serve Me? I accept your service due to your ecstatic love for Me. Thus I shall appear, and by My audience (darshan) all will be delivered. My name is Gopal, lifter of Govardhana Hill. I was installed by Vajra (Krishna’s great grand-son). When the bad elements attacked, the priest who was serving Me hid Me in this bush in the jungle. Then he ran away out of fear of the attack. Since then I am staying in this bush. It is very good that you have come here. Now just remove Me with care.’

And the body disappeared. Srila Madhvendra Puri woke up and began to lament and cry.

After morning bath, he went to the village and gathered everyone. He said loudly, ‘Sri Govardhan-dhari, diety of the village, is lying in the bushes. Let us go there and rescue Him. We have to dig Him up.’

After hearing this, everyone accompanied him and according to his directions, cut the bushes, cleared the path and entered. They were pleased to see the Deity covered with dirt and grass. After cleansing the deity, some strong men assembled to carry Him to the top of the hill, as the deity was too heavy. A big stone was made into a throne, and The Deity was installed upon it. Another big stone was placed behind the Deity for support. Under the guidance of Srila Madhvendra Puri, when the Deity was being installed, nine hundred pots of water were brought from Sri Govind Kunda. Women folk began to sing and musical sounds of bugles and drums began to play. All the milk, yogurt and clarified butter in the village was brought to the festival. Various foods and sweetmeats, as well as other kinds of presentations were brought there. The villagers brought a large quantity of Tulasi leaves, flowers and various kinds of garments. Then Srila Madhvendra Puri personally began the Abhisheka. 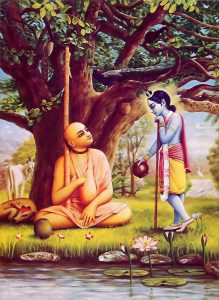 Mantras were chanted, initially the Deity was massaged with a large quantity of oil. After the first bathing, further bathing were conducted with pancha-gavya and then with pancha-mrita. Then the maha-snan was performed with ghee and water, which had been brought in one hundred pots. After the maha-snan was finished, the Deity was again massaged with scented oil. Then the last bathing ceremony was performed with scented water kept within a conch-shell. After the body of the Deity was cleansed, He was dressed very nicely with new garments. Sandalwood pulp, Tulasi garlands and other fragrant flower garlands were offered. After bathing ceremony was finished, incense and lamps were burned and all kind of food were offered before the Deity. Finally everyone offered various prayers and then obeisances, falling flat before the Deity in full surrender. The villagers have brought such large quantities of the entire stock of rice, dal, etc that the entire surface of the top of hill was filled. Five to seven men have prepared a huge quantity of chapatis, which were sufficiently covered with ghee, as were all the vegetables, rice and dhal. Pots of yogurt, milk, buttermilk, shikharini, sweet rise, cream and sold cream were placed alongside the vegetables. In this way the Annakuta ceremony was performed, and Sri Madhvednra Puri Goswami personally offered everything to Gopal.

Can anyone imagine that inspite of all the people present in the villages, why would Sri Gopala wait for Srila Madhvendra Puri when He said to him, ‘For many days I have been observing you, and I have been wondering, ‘When will Madhavendra Puri come here to serve Me?’?

The answer to this query is given by Sri Gopala Himself, ‘ I accept your service due to your ecstatic love for Me’