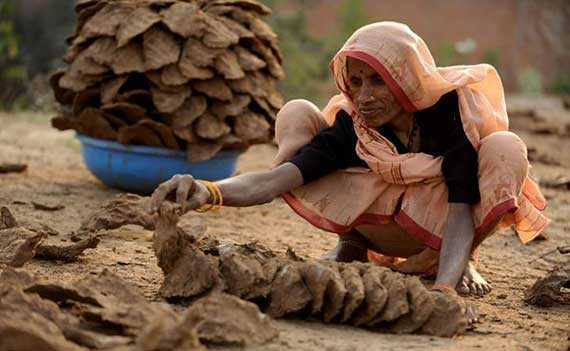 One day Kamsa thought that this boy Krishna is killing all my friends. Every demon i send is immediatly killed by Krishna. So now I will go and kill Krishna myself.

Thinking like this Kamsa came to Vrindavana. So from Mathura when you come to Vrindavana there is an area which is near a place called Badarikashrama, so Kamsa entered there and he saw there is an old lady and some young cowherd girls.

So Kamsa asked the old lady: “Can you please tell me where the house of Nanda Maharaja is?”

So this old lady said: “Oh! you want to see the house of Nanda Maharaja? Come, I will show you.”

Saying this she grabbed Kamsa by his hair. Actually the ksatriyas used to keep long hair. It works as a kind of a helmet. Like the sikhs today wear that, they are actually ksatriyas.So they keep their long hair and they make a knot above their head with a turban used as a shock absorber; so Kamsa had that, she slapped Kamsa’s head and let the turban fly, then she grabbed Kamsa by his hair and picked him up and dunked him in a pond, in the water.

When she pulled Kamsa up, he was transformed into an old lady, he could not stand straight, his body became wrinkled, and all the cowherd girls started laughing seeing the transformation.

So the cowherd girls said she is so old, what she will do?

She is good for nothing. So then they felt that maybe this useless woman can do one thing, she can make some cow dung cakes.

This cow dung cake is very easy to make and very useful. In Vrindavana there are many many cows so plenty of cow dung; so they take the cow dung and slap it against the wall so it sticks on the wall and it becomes baked by sun and they use it for cooking. In Bengali it is called gobar.

So they said then at least maybe she can make some gobar, cow dung cakes.

But this old lady was useless, she could not even make some cow dung cakes, she tried to lift up the cow down, but by the time she slapped it, it all got scattered, it did not stick on the wall.

They all started laughing at first and when they tried to teach her and she could not learn, they told her that you get out of here, you are good for nothing.

They started to harass her, so this old lady namely Kamsa, was so distressed, she started crying and telling Purnamasi: “Please let me go let me go! I will never come back.”

Purnamasi grabbed her by her hair again dunked her in the water again, she got back her form as Kamsa and she told him: “Now go.”

He ran for his life and he took a vow that he will never come back to Vrindavana.

Moral of the story: