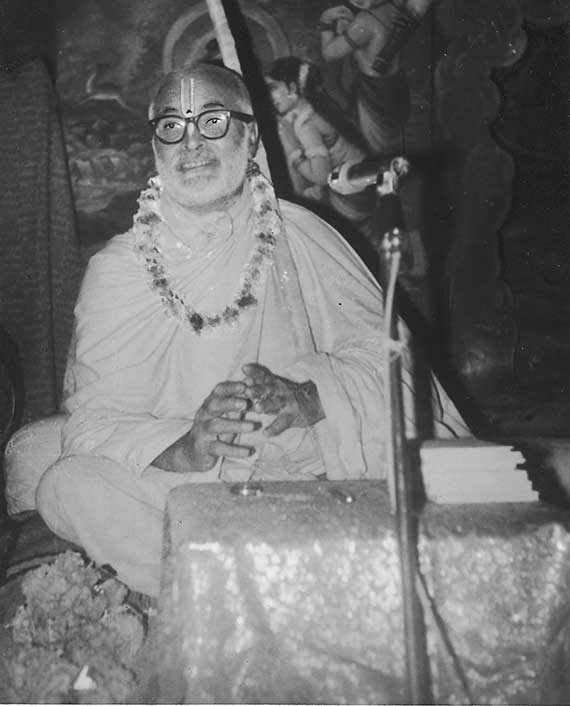 During 1930, when His Divine Grace Srila Bhakti Siddhanta Saraswati Goswami Thakur Prabhupada organized a month-long festival at Calcutta Bagh Bazaar Gaudiya Math for Sri Krishna Janmashtami, each day a different dignitary was invited to sit as Honorary Chairman of the evening meeting. Some students of world-renowned scientist Dr. C V Raman were among those who came regularly to listen to the lectures of the Gaudiya Math preachers. One day these students came to see Srila Prabhupada and complained that every day a different distinguished person was being made Honorary Chairman, but their professor, whose fame had spread throughout the world, had not even been invited.

Srila Prabhupada answered that He had no objection to making Dr. Raman Honorary Chairman for an evening. He asked our Gurudeva (Srila Bhakti Dayita Madhav Goswami Maharaj – Founder Acharya, Sree Chaitanya Gaudiya Math) to take charge of inviting him.

Srila Gurudeva first went to Dr. Raman’s house but did not find him there. The sceintist’s wife sent Him with an orderly to Dr. Raman’s laboratory on Circular road.

There, Srila Gurudeva met him on the second floor where he was sitting in a corner of a huge loft, engaged in his research activity. Dr. Raman spoke neither Bengali nor Hindi, so their conversation took place in English.

Upon being asked by Dr. Raman the reason for His coming, Srila Gurudeva answered, ‘A large month-long religious gathering is being held by the Bagh Bazar Gaudiya Math on Sri Krishna Janmashtami. On each day, a different dignitary of the city is invited to grace the Chairman’s seat, and we humbly invite you to do the same.’

Dr. Raman answered, ‘I don’t believe in your keshto-bishtu (Krishna-Vishnu). I have no faith in anything that cannot be confirmed by direct sensory experience. I cannot waste my valuable time with imaginary things. I would prefer to attend any conference dealing with science or education, but not a religious one.’

Srila Gurudeva said, ‘Your own students have been coming regularly to listen to the Math’s swamijis speak. It was their desire that you be honoured in the same way that so many other Calcutta community leaders have been in the past. I have been asked by my Gurudeva to invite you, so please accept our invitation.’

(One side of the lab room in which the conversation was being held was a windowless, doorless wall, on the other side of which lay the whole of North Calcutta)

Srila Gurudeva replied, ‘I can see nothing on the other side of this wall, but if I say that there is nothing there, will that be true?’

Dr. Raman answered, ‘Perhaps you cannot see what is there, but you could with the appropriate instruments.’

Srila Gurudeva asked, ‘There is a limit to what your instruments can do. You can only see as far as they allow you. Can you say that there is nothing beyond these limits?’

Dr. Raman replied, ‘Never mind. I will not waste my time on this. I will not give my attention to anything that is not within my sense experience. I will only spare my valuable time if you can actually show me your God. Can you do it?’

Srila Gurudeva asked, ‘If your students were to say to you that they will study your scientific findings only if you can show them the truth of what you have realised through your experiments, what would you say?’

Dr. Raman replied, ‘I would make them realize it!’

Srila Gurudeva asked, ‘Can you make them realized before teaching them?’

Dr. Raman replied, ‘No, I would first have to show them the process by which I have come to realize the truth. They will have to follow that process if they want to have the same realization. First that will have to earn their B.Sc. degree, then their M.Sc. Then they will have to study with me for another five years. Then I will be able to make them understand.’

Srila Gurudeva said, ‘If that is true for you and your scientific knowledge, then can the seers of ancient Indian not say exactly the same thing? Follow their process and see whether you experience God’s existence or not. You are unable to show the scientific truths you profess to your students until they have adopted your process. Similarly, if you want to experience or understand God, you have to follow the process by which that is accomplished………………’